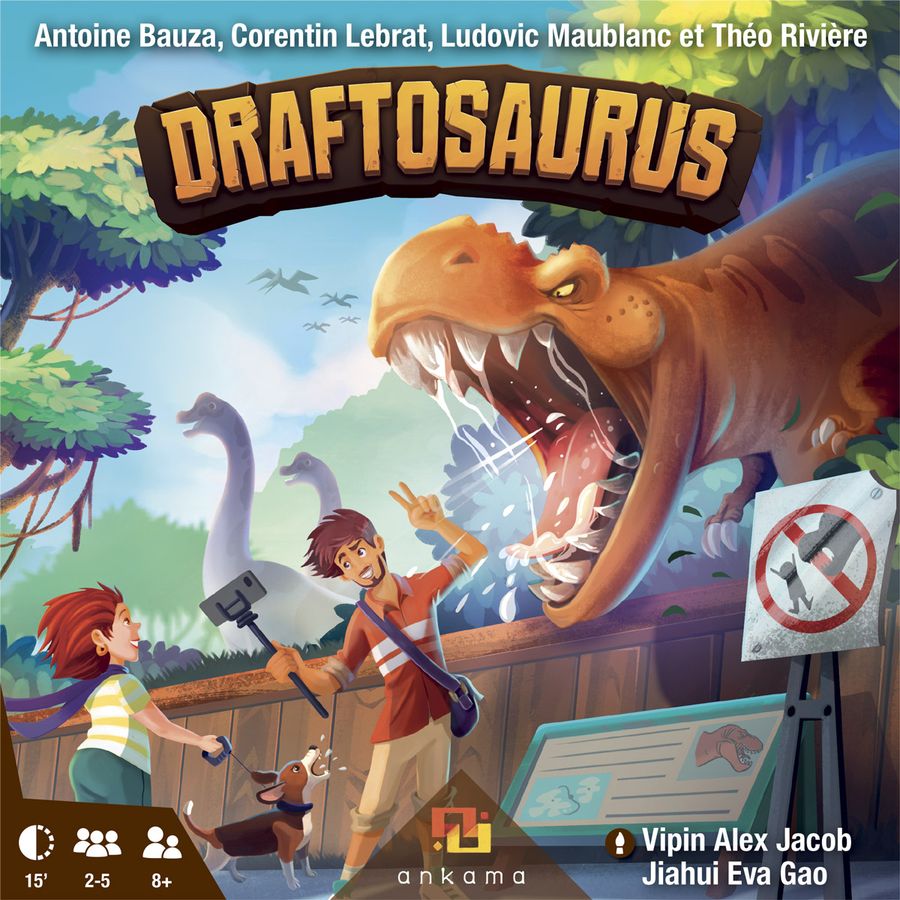 If you're looking for an adorable variant on a card-drafting mechanic, then look no further. Draftosaurus by Antoine Bauza, Corentin Lebrat, Ludovic Maublanc, and Théo Rivière, published by Ankama, is a very simple card drafting game, but instead of drafting cards, you're drafting dinosaurs!

Players take on the role of zookeepers looking to populate their parks with newly cloned dinosaurs. Each player wants to get the best combination of dinosaurs possible to make their dino-zoo more interesting to patrons than the other parks' owners.

Before we get any further, let's take a look at our numbers: 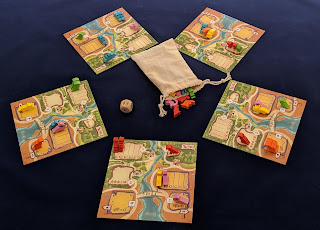 The game consists of a bag of ten each of six types of dinosaur meeples (minosaurs?), five player mats, and a large wooden die. Players each take a player mat and draw a handful of six dinosaurs from the bag. Keeping these dinosaur meeples hidden from their opponents, the players choose one to keep and pass the rest to the next player. Place your chosen meeple in one of the pens on your player mat. Then choose another dinosaur from the handful that has been passed to you.

There are six pens on your player mat. They include:
After the first round of six dinosaurs, all players draw six more from the bag, and play a second round. Then you score all your pens.

The first issue is the die. Players take it in turn to roll the die. This limits where you may place your dinosaur this turn. Note, however, that the player who rolled the die is not limited by the die roll; that player may place their dinosaur anywhere. The die results include:
Sometimes, you may be unable to place a dinosaur in any of your pens. This may be the result of a die roll (getting the die roll that prohibits you from placing a dinosaur in a pen that already has any dinosaurs in it, for example) or because there are no legal pens into which to place the dinosaur (the single-type pen is full, you already have the current dinosaur type in the one-of-each pen, the two single-occupancy pens are already full, etc). Alternately, you may decide that it's in your best interest not to place the dinosaur in any of your pens, for long-term planning reasons.

In this case, you may put the dinosaur in the river that divides your player mat into two sides. Dinosaurs here at the end of the game are worth one point each; not a lot, but better than nothing.

And finally, the mats are double-sided. If you want a slightly more advanced version, with a bit more technical scoring, all players can flip to the 'winter' side of the map, which has different requirements for placement in the pens. 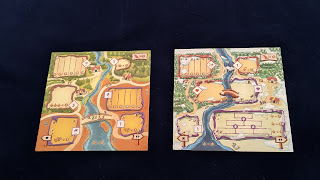 This a great little filler game, suitable for young players, but with enough depth to satisfy more experienced gamers when playing with younger people (or as a light game between heavier games). My one complaint with this game is that it would have been so much nicer if there were some way to contain the dinosaur meeples as they're being passed around the table. Small cups or boxes would be ideal. John has some small cups that just fit in the game box which he has included as permanent components of the game, just to make it easier to pass the meeples around.

Other than that, I think it's cute and fun. But let's not forget the six characteristics of a good game:
You know we've got a winner, because it's got all six! But as always, I hope you can decide for yourself, based on what you've read here, whether this is a game you should get for yourself. So give it some thought, make a good decision, and remember to