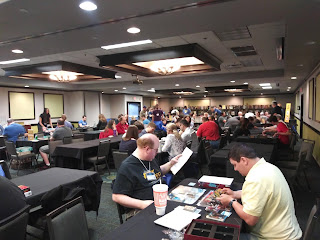 This edition of TokenCon was much the same as last year, except there was more of it. An additional day, more space to play, more attendees... on Saturday, I went by myself. I checked out games from the Play-to-Win library and sat down with a 'Players Wanted' sign, waiting for players to join me.  Sunday, I met my friend John and two of his offspring, and we spent the day playing games.

One big change was to the retail area. Last year, a section of the playing area was walled off with tables for the vendors to set up. This year, to accommodate the larger playing area, the vendors were moved out into the courtyard.
OKC Escape Room had a promotion: there were seven signs around the convention with puzzles of various types. If you solved the puzzles, you were entered to win a free escape room session. They had speakers and panels and schedule games.

I did not volunteer to GM this year, mostly because I was so disappointed that only one person signed up for my game last year. 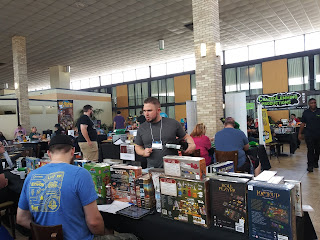 It seemed to me that most of the people at the con came with friends, and spent all their time playing with those friends. When I set up the games with a 'Players Wanted' sign, I found I often had to wait a long time before anyone would approach me and express interest in joining. Aside from the disappointment of not getting to play as many games because I was spending so much time waiting for players, there was the additional disappointment of not getting to meet new friends who share a common interest.

I'm new to the board game convention scene, so I don't know if this is the norm. I would think that part of the appeal of a convention like this is to make new friends. Perhaps you will remember earlier this year when I posted an article about Geekway to the West, and I talked about how entering a convention centre packed with people who share my interest in board games felt like coming home. I was kind of hoping that it would be an opportunity to meet fellow gamers and make new friends.

That did not seem to be the case.

This is not a problem with the convention itself, so much as with the culture of gamers. Or possibly with the gamers in Oklahoma. I'm not sure. All I know is that, as socially incompetent as I am, I need all the help in making friends as I can get. And a game convention seems like it should be the perfect opportunity for making new connections. So I was a little disappointed that it was not.

More About the Con Itself

The games library was pretty expansive. I wanted to try the new Die Hard board game, and I was told there was a copy in the library, but I never saw it when I looked (and I looked frequently). Still, there were a lot of good games. The play-to-win library was much smaller than the one at Geekway (not surprising), but neither I nor any of John's family won any of those games. I was especially hoping to win a copy of Echidna Shuffle. Alas, I did not. 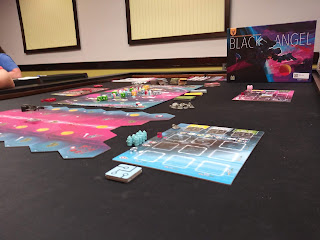 The 'Hot Games' section was there again. I learned to play Black Angel (which is pictured above, but which I will not review here). They had a few other games that I did not get to try. There were, of course, lots of D&D games. There were tournaments, a snack bar, and Prototype Alley.

Overall, I am pleased with the con. I think it has improved since last year, and I look forward to seeing more improvements in the future. And I really don't know what else to say.

But there were a couple more photos I took that I was hoping to share. So I'll throw them in here at the end. 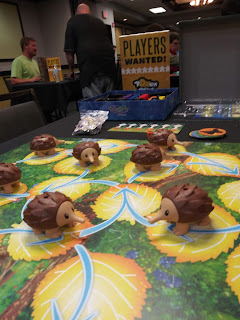 That's the game of Echidna Shuffle waiting for players to join me. 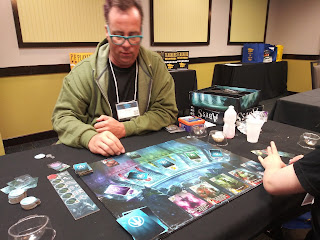 That's my friend John, playing Abyss (another game I adore) with me and his son.

And I think that's enough for now. I'll see you back here next week, and until then, remember to