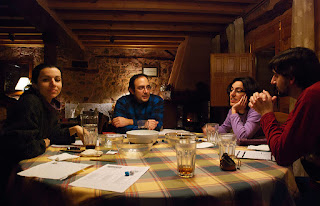 
Perhaps the most important thing to keep in mind is where to stop. The exact end point will depend on several factors:

The pacing of your sessions will depend strongly on the structure of that story. If you're running an episodic game, where every (or nearly every) session is a self-contained unit, then you should stop when you reach the end of the night's story. In a dungeon-crawl scenario, it may be a simple task to just stop at any convenient lull in action. 'Fight's over! Time to wrap it up!'

It might be harder for other structures. Set-piece stories may or may not have obvious stopping points, depending on the nature of the story being told. Branching, puzzle-piece, or enemy timeline structures can be more difficult to predict. You'll simply have to use your common sense and your understanding of the flow of the story to decide when would be a good time to pause the story.

An obvious consideration is what's happening in the game. Clearly, you don't want to stop the game in the middle of combat; it can be hard to pick up where you left off when you've got initiative, character placement, and all the other minutiae to keep track of. But just as important is whether there's a narratively important scene occurring. Certainly, you don't want to stop the story right in the middle of the the villain explaining his dastardly schemes!

The best place to stop a story is during a transition. The characters are on their way to a new location. They've learned who the villain is, and are about to set out to track him down. The heroes have completed their tasks and are going to sleep until the next day. These are all great examples of a good point to end the session for the evening.

When finishing a session, don't forget the other tasks that may need to be completed before everyone goes home. We'll talk more about these tasks in a moment, but the important thing is to ensure that you're leaving enough time to get these tasks done. If the game session is scheduled to finish at 10:00, and you know it's going to take at least ten minutes to award experience and schedule the next session, don't start a scene that you know is going to run past 9:50.

Sometimes this may mean you'll end a session early. That's fine; players can always spend some time talking about the game, or even just chatting! Remember that gaming is a social activity, and even if the players aren't playing, they would hypothetically still enjoy talking about other topics!


Drawing to a Close

We know when to stop. Now let's discuss how to stop. Make sure to wrap up any loose threads from the evening's session. Does everyone know where their characters are? What are they doing? Will the next session start at the exact moment you stopped, or is there room for them to move, in time or in space? The less you have to remember when you begin the next session, the better it will be for everybody.

Don't just stop and say, 'That's it. We're done!' Make sure to move the story to a natural resting point. Leave everyone in a comfortable position (narratively speaking). Ensure they're not spending the next week or two (or however long it is until the next session) fretting about some aspect of the story (or even worse, their characters).


To End on a Cliffhanger?

Some GMs like to end their stories on a cliffhanger. That works for some GMs, and for some players. Not for everyone, though. I used to use cliffhangers frequently. I thought that it provided dramatic tension, and left the players impatient to come back for the next game. But I've since found that it doesn't work for me. Maybe it's the players in my group. Maybe I overused the technique, and the players grew tired of it. But whatever reason, I try now to end each session on a dramatically appropriate note. I only use cliffhangers for special occasions.

For example, recently, I had my group fight a giant skeleton creature. They had to use a special weapon, a seat mounted on hydraulics to move like a ride simulator, with a cannon that shot fireballs. There was a prophecy that if an angel sat in the Apparatus, it would release a monster. In the games leading up to this session, one character was repeatedly noticing angel imagery.

So, with all of this buildup, at the end of the combat, when the skeleton creature had been defeated, the players left the Apparatus on the beach for a moment to tend to bystanders. When they returned to it, there was a winged man standing next to the Apparatus, making it clear that he intended to sit in it and use it against them. Then, with that huge amount of dramatic tension, I ended the session.

By doing it this way, with sufficient foreshadowing and buildup, as a singular event, the cliffhanger had sufficient impact. But by and large, I avoid cliffhangers any more. You should work out for yourself whether the cliffhanger is a fitting end to a game session.

The last thing to do after ending the game is to take care of a few minor details. Giving out experience points is an important one, which I will detail in another entry. But it's also important to schedule the next session, if necessary. Some groups meet every Friday, and only need to plan the next session if something will cause them to miss a week. Other groups must plan each time, as the players' schedules don't always sync up perfectly.

But one more important final task at the end of the game is to get players' feedback. You don't need to do this every time, but once in a while, it's a good idea to check in with your players to see what they think of the game. Since, of course, the point of gaming is to have fun, you want to make sure everyone is having fun. See what they like or don't like about the game so far. Ask for suggestions and input. And remember to take that input on board! If a player wants something to happen or has an idea for a story, listen to him or her! I'll probably talk more about this in a later entry as well.

It may seem like a little thing, but the way you end your game sessions can have a massive effect on the campaign as a whole! Be aware of the dramatic and narrative nuances, watch your pacing and timing, and don't lose touch with your players.

With that, I hope you find some useful advice for maintaining the inertia of your games. I'll see you back here next week. Until then,