Board Game Review: Cheer Up! 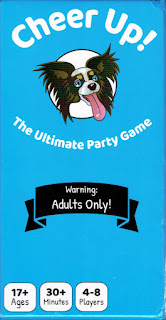 I'm going to lay all my cards on the table, just as soon as you forgive me for that terrible pun. I only sort of like Cards Against Humanity. Sure, when I first played it, I thought it was delightfully funny in a darkly immature way. But after a while, I got tired of it. Mostly because it was the only game that many of my friends wanted to play. Yeah, it's offensive in that way that non-uptight adults living in an incredibly uptight culture appreciate it. But CAH ultimately is just offensive jokes for offensive jokes' sake. There's no creativity, no strategy, no skills. In the end, it all boils down to 'which player happened to receive the card that the judge finds most humorous this turn?'

But, as I said, it's the only game that many of my friends like to play. There's a certain group of people that I like, but I can't spend much time around them because the only thing they ever do for fun is get drunk and play games, usually CAH, or if not, then one of the JackBox games.

So when I saw Cheer Up! by Chris Rio and published by Cheer Up Games, I wondered if maybe I had found a game that would appeal to those who rely on CAH for their 'gaming' needs but still provide me a little more engagement than the normal CAH-style party game so that I don't feel resigned to my fate when everyone else wants to play it.

So let's look at those numbers:


An Overview of Cheer Up! 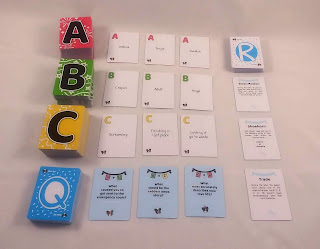 Much like in Cards Against Humanity, players take it in turn to be the judge, who plays a question card, and chooses the response of one of the other players to receive a point. However, the similarities pretty much end there!

For starters, Cheer Up! has five decks of cards instead of two:

So, for example, if the judge reads the question card that asks 'What were you surprised to see at the zoo?' and has the letter combination 'B + C,' you might play the B card that reads 'People' and the C card that reads 'Laying an egg.' Alternately, if the question is 'What's the worst way to end a date?' and the letter combination is 'C + C,' you might use the C cards that read 'Taking things to the next level' and 'Hanging out near a playground.' Then, you could add the word 'whilst' to make your complete answer 'Taking things to the next level whilst hanging out near a playground.'

However, before players reveal their answers, the dealer draws a Rule Card. This changes the game slightly for the current round. Some rule cards have no effect, or duplicate an already-used rule card, but most fall into one of three categories:

Change how the players reveal their answers

For example, you might be asked to read your answer in a foreign accent, or to add a phrase to your answer (like the card that lets players say 'Like in that movie' as part of their answer). Others make you answer in slow motion, or with your tongue stuck out as far as possible, or make funny faces as you read your answer.

Some rule cards say something like 'the dealer chooses one of the letters on the question card; all players must pass that card to the left.' Others say that all players give dealer one card of a chosen type (A, B, or C), and the dealer must shuffle those cards together and pass them back to the players randomly. One such card makes two players swap their entire answer and aren't allowed to look at them until it's time to read them aloud.

One word on each question card is highlighted. Some rule cards cause you to treat the card as if that word were its opposite (so for example, on the question 'What  always  helps you go to sleep?' you would treat it as if it read 'What  never  helps you go to sleep?'). Another card causes the judge to discard the current question card and draw a new one. Alternately, you might be asked to award the point based on who makes you laugh the hardest instead of on the merit of the answers themselves.

Some rule cards are awarded as a bonus point. One example is the card that is given to the second place winner of the current round. Another gives a bonus point to the player who makes the judge laugh the hardest.

Once the rule card has been revealed, play out the round as normal, following whatever modifications the rule card has created. Players do not hide who submitted an answer as you would in CAH; instead, they read their own answers aloud, so the judge knows who's answer each one is. After the judge awards the point(s), discard all cards used in the round, and the next player draws a question card to start a new round as the new judge.

Permutations in Cheer Up!

The rules have a number of house rules that you may decide to use, such as the 'surprise!' variant, in which players know the letter combination from the question card, but don't know what the actual question is until they've chosen their answers.

Additionally, the game comes with the 'NSFG' (Not Safe For Grandma) cards included. In my experience, players can make some pretty dirty answers with just the (relatively) PG cards included in the base set. However, if you want to include a little more of the offensively perverse feel of CAH, you can shuffle the NSFG cards into the appropriate decks.

The rules say you should play to a set number of points, with seven listed as a suggestion. But as with all games of this type, you can play until you decide you're done, or for a set amount of time. Whoever has the most points wins, but again, it's frequently not even necessary to choose a winner. You could just decide that the fun of playing is more valuable than choosing a victor.

Final Thoughts on Cheer Up!

This game is obviously not intended for serious gamers. I only bought it (after testing out whether it was worth spending money on via the print-and-play version) because I was hoping that it would give me an alternative to CAH for when I'm playing with that particular group of people. But even those serious gamers who've played it with me have expressed approval (for a light party game, of course).

Let's not forget the six characteristics of a good game:
As a party game, it doesn't really need to end decisively. And it's not entirely accurate to say that it doesn't end decisively; if you choose to follow the rules included in the game that say that the game ends at seven points (or some other mutually agreed-upon number), it will end decisively. But usually, players just keep playing until they decide to be done with it.

Anyway, that's my take on this game. A good alternative to Cards Against Humanity, but otherwise the same light filler party game. So give it a look to see if it might be for you, and don't forget to