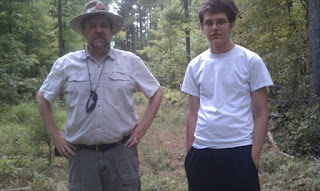 
PF: I'm not familiar with geocaching, so there's a lot of things that I'll have to take your word for.

JK: There's definitely a lot of the language in there. We really wanted to capture the feeling of exploring, searching, the equipment. It is a great hobby though. All you need is a GPS, and most people have that on their phone now. Everywhere in the world, there's millions of caches, so it's a great hobby you can do anywhere. It gets you out hiking, and people usually hide caches in places you might not otherwise find. We like the hiking trail stuff better than the urban ones. But you can go into the city, there's little micro-caches, people do that sort of caching too.

PF: I was curious about the Travel Bug.

JK: They started off as just a dog tag with a trackable number. The people who owned the travel bug, the site would automatically track it for them, so they could see everywhere it's been. And then it kept expanding. They have all sorts of goals, like 'This travel bug wants to visit every continent.' People would help it move along until it got there. So we put in some travel bugs. The idea is, if you help meet its goal, you get extra points. I debated whether to leave them in there, because they do add a little complexity. But they're a fun part of geocaching. So we thought, 'We'll make them optional.' It gives you a few more strategic decisions.

PF: Did you guys do the art yourselves?

JK: When we did the prototypes, I just grabbed some [images online]. But when we started to release it, I hired an artist to do the board. The rest of the art is all stuff I either got off the web, in the public domain, or probably about ten or twenty percent I had to do myself. The rules and the prototype were pretty quick. But the art has taken a while.

PF: Is this the first game you guys have created?

JK: Yeah. And I don't anticipate doing more games. This one, it's purely a labour of love. We're not doing it to make money. I think I make $2 on a sale, and I've already spent a thousand probably on it, so it'll never make money in that sense. But I'd love for people to play it. I think what I'm going to do, they have geocaching mega-events. We'll probably go to that. I'll pre-order maybe a hundred copies and set up a little booth. If you're geocaching and you like board games, you're a perfect target audience. So hopefully we'll get a few copies out that way.


Working with other people and companies

PF: I keep wondering about an actual company saying, 'Can we publish this?'

JK: Yeah, that'd be great. When I first started working, I contacted three or four companies. Most of them responded, but I didn't get anybody even really wanting to take a look. If somehow it did take off and somebody wanted to publish it, you could do so for a lot cheaper than the GameCrafter does. It's expensive, but I'm checking game prices on other things. It's not that out of line. But if there's some company out there that looks at it and says, 'Hey, that's interesting,' cool. I'll be happy to work with somebody. I don't even care about the profit side of it. I don't know if you're familiar with the Knights of the Dinner Table comic strip?

JK: That's actually one of the places where I learned about geocaching. So I figured I'll probably send him a copy, because he's a geocacher. I did ask them if they were interested. I don't think I got very far with that at the time. But I didn't have a game I could send them either. Now I do. Maybe something will come of that.

PF: One of the things we noticed is that the point tokens are a little cumbersome. Maybe if you had a scoring track instead?

JK: I'm not a huge fan of the point coins exactly, but one of the reasons that I like them is it's a way of easily tracking which types of caches you've found. Which isn't hugely important, but it's actually kind of a big thing in geocaching where some people... there are two cards in there, 'It's All About the Numbers,' and 'It's Not About the Numbers.' There are two competing philosophies of geocaching. Some people, they just want to find every single geocache. It's like a big competition to them.

And then there's other people who say, 'No, I love the challenge, I want those puzzles, I want the level five caches, they're just really hard.' So we wanted to model that a little bit. And if you have the card that says, 'It's All About the Numbers,' it will let you jump to a nearby level one. The one that says, 'It's Not About the Numbers,' if you haven't found any level fives, you lose points, because you're out there doing the easy ones. We wanted a way to do that.

Now, we could have done it with the score pad, still, but coins actually are a big thing in geocaching. Cachers actually make their own coins. Geocoins, they're called. We wanted a model of that, so as you're finding caches, yeah, you get equipment, but the coins were a way of showing the caches I've found. 'Yeah, I've got three level fives, and two first to finds!' So that part, I probably wouldn't change, although I agree, the criticism is valid.

PF: Obviously you're into geocaching, and you mentioned that you have lots of board games.

JK: Yeah, we're huge into all types of games. [Jason's] closet is just full of games. Carcassone, RoboRally, Magic: The Gathering. Computer games as well. D&D. I met Katie through Lord of the Rings Online.

PF: Well, anything you guys want to say before we wrap up?

JK: One thing I wanted to do with this game, [was] to reward good behaviour, and punish bad behaviour. For example, there's an event that says 'You cleaned up,' or 'You left no trace,' which are standard geocaching things. I wanted to give you points for doing that.

And I didn't want it to be too competitive. I mean, it's competitive, there's one winner, but I wanted it to be co-operative in the sense that, if there's two people and they're on the same cache, at the same time, and one finds it, they both get it. So you really get two people searching for it. Which, in geocaching, is huge. You'll go out for those harder caches, often you'll take three or four cachers with you, and you'll have a much better chance of finding some of those hard to find ones. So I wanted to model those co-operative aspects of it too.

And there you have it. I hope you enjoyed reading this interview. Of course, this version is very condensed. The actual interview lasted a full hour, so I had to cut out a lot of stuff to fit within space limitations. But I think I did a good job of capturing all the important points! If you'd like to try the game, head over to their GameCrafter page and pick up a copy for yourself! Until next time,