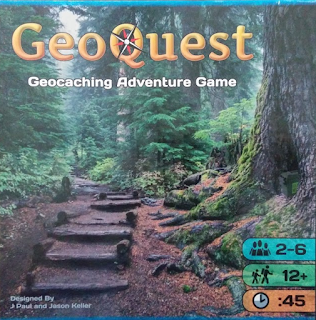 
An Overview of Geoquest

Geoquest is designed to emulate the experience of geocaching. For those not familiar with the hobby, enthusiasts will hide a cache (which can be anything, from a pencil eraser to a chest filled with trinkets of some sort) somewhere and post the co-ordinates online. Others will then use a GPS tracker to find that cache. Depending on the type of cache, they may take a photo of it, or replace one of the trinkets with one of their own. They then post online that they were able to find the cache.

Some of the caches are hidden by a puzzle. Cachers must decipher clues to find the cache. Some trinkets are 'travel bugs;' that is, they have a note attached saying something like, 'This trinket wants to travel from the west coast to the east coast.' When you take such a trinket, you should try to help it reach its goal. In this example, a cacher might place the trinket in another cache further east so that someone else can find it and continue moving it east.

Geoquest tries to capture the feel of geocaching in a board game. Although I personally have never engaged in geocaching, I imagine that the game does a good job of accomplishing that goal. The board represents a region which includes forests, plains, swamps, rivers, paths, and urban areas. Several caches are placed upon the board, and players travel to each one and roll to find them. The caches have varying levels of difficulty, and players receive points based on how difficult that cache is to find. The winner is the first player to reach 25 points. 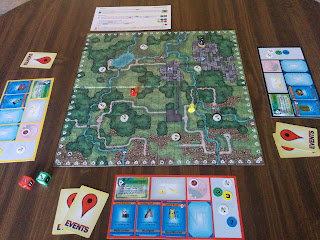 To set up, place eight cache tokens randomly on the board (but with two in each quadrant, to keep them relatively evenly spaced across the board). Each cache token is rated as level 1 to 5. To find a cache, you must be on that space and spend a turn searching. Searching involves rolling the dice and achieving a result equal to or higher than the level of the cache.

Some of them are puzzle caches; these have a category associated with them. Some puzzle categories include 'round things' or 'sea creatures.' In order to find a puzzle cache, in addition to rolling the level, you must also name an item in that category which contains the letters of the cache's co-ordinates. For example, if the category is 'On a Farm,' and the cache is located at (E, L), you might use the word 'stable.' Another player could then use 'bull pen' to find that same cache later on. And so forth.

Some caches are multi-caches. In order to find such a cache, you must roll that level or higher for two or more turns (as indicated on the cache token).

In any case, when you find a cache, you take a points token equal to the level of the cache and place it on your player mat. If you were the first to find that particular cache, you also take the 'first to find' token for that cache, which is worth an additional point. Place your colour marker under the cache to indicate that you've found it. Then take an equipment card.

Equipment cards grant you bonuses, and can represent anything from a radio to bug spray to trail mix.

Each player has a cacher card. This represents your 'character,' which grants you a special ability.

If you roll doubles, you draw an event card. Some event cards say 'play immediately.' Most event cards, however, are held in your hand, and can be played against another player on a future turn. You can only have one event card in your hand at a time, though, so if you must draw a new card, you have to decide which to keep.

You cannot have more than four Equipment cards. If you draw any beyond that limit, you must discard one. Furthermore, Equipment cards have 'ensemble' names on them. For example, the 'Cell Phone' card is part of the 'Engineer' ensemble. If you ever have more than one Equipment card with the same ensemble name, you take the appropriate ensemble card, which grants you still further abilities.

Some caches have 'travel bugs.' Players carry these tokens and place them at another cache for a bonus point. However, each travel bug has a goal printed on it. Some examples include 'in a city space,' or 'within 3 squares of a stream.' If you place a travel bug in a cache that fulfills its goal, it is discarded and you get 3 points.

Also, as geocaching is often a co-operative hobby, the rules attempt to emulate this aspect by allowing players to work together to find a cache. 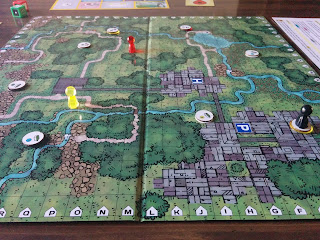 At first, Geoquest doesn't appear to have a lot of strategy. It seems like a simple roll-and-move game. But as you get deeper into it, you realise that there is some strategy. You must decide when and on whom to play event cards. Also, some cards grant you bonus points for certain caches. 'Not About the Numbers,' for example, gives a bonus point for each level-5 cache you've found. Geocachers approach the hobby this way—some just want to find as many caches as they can, whilst others only look for the most difficult caches.

Geoquest probably won't appeal to players of thinky-thinky games. But it does an excellent job of simulating the real-world hobby on which it is based. Some components (like points tokens instead of a scoring track) make aspects of the game slightly cumbersome. As we'll see in the interview next week, they did this for a reason. In the case of points tokens, certain event cards grant bonuses based on how many caches, or how many caches of a certain level, a player has. Point tokens make this easier to track.

Honestly, my biggest complaint about this game is the tokens that players place under a cache token when they find it. Instead of paper or cardboard tokens, these are bevelled plastic discs. This means that, after a while (especially in games with more players), several tokens under the same cache form an unstable tower.

Still, the game is obviously a labour of love, and that counts for a lot. So give it a try! You might enjoy it! If you like, head over to the Gamecrafter page and get a copy for yourself! Until then, remember as always to