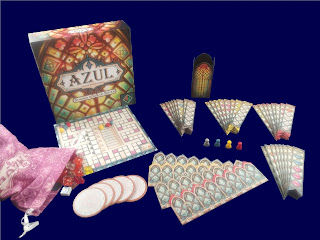 
An Overview of Azul: Stained Glass of Sintra

Players take on the role of glaziers, installing stained glass windows in the royal palace at Sintra. Much like in the previous game, in which they are installing tiles on the walls of the palace of Evora, players must take care not to waste resources as they strive to create beautiful patterns of coloured glass.

However, it's the placement rules that have changed. Instead of of having player mats, each player now has a series of pattern strips. These are tall rectangles with notches on the bottom, displaying five spaces on which you may place the pane pieces. Each player gets a set of eight pattern strips, and arranges them randomly above their palace boards (the wide pieces with zig-zag notches along the top). When setting up the game, your pattern strips and palace boards will look something like this:

Of course, these already have pane pieces on them. Also note that there's a pattern strip missing from the setup on the left; more on this in a moment.

When you take pane pieces from the factory tiles, you must then place them onto a single pattern strip. You're not allowed to place pane pieces on more than one strip, and you must put them on spaces matching their colours. You cannot, for example, put blue pane pieces on yellow spaces; they must go on blue spaces.

If you do not have legal spaces where you may place the pane pieces you have taken, they are discarded. Each pane piece discarded in this way moves your marker one space further along the 'broken glass track' of the scoring board. At the end of the game, you lose points as indicated by your position on the broken glass track.

Be careful with this, though. There are exactly six rounds in the game, so you have a limited amount of time to work on scoring those points. Don't focus on the strips on the right so much that you don't have time to score any of the ones on the left!

Additionally, each round has a different bonus colour. When you score a pattern strip, you get a bonus point for each pane piece of that colour in the strip.

At the end of the sixth round, players apply the negative points from the broken glass track. Then, they score end-of-game bonuses based on their palace boards; palace boards are also double-sided, and players choose whether to use side A or side B when setting up at the beginning of the game. All players must have their palace boards on the same side. The chosen side determines how the end-of-game bonus scoring works. The player with the most points is the winner.

I enjoyed this game. It was a pleasant twist on an already enjoyable mechanic. There's a little bit of screwage involved, but not so much that it ruins the game. It's got a good balance of strategy and luck, where you can make plans based on probability, but still hurt when the odds end up going against you.

But let's not forget the six characteristics of a good game:
Most excellent! This game has all six! But of course, you should (as always) decide for yourself if this game sounds like something you'd enjoy. And remember, whatever you decide, I hope you always