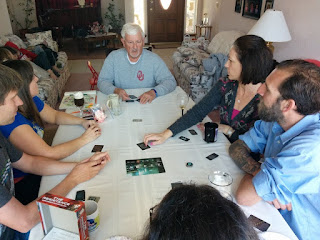 
The Mistake I Made

I often forget, when suggesting a game to play, that many people are not as familiar as I am with certain gaming tropes. The idea of an adventuring party made up of warriors, mages, clerics, and thieves sitting in a tavern drinking is a common one in the gaming hobby. People with less exposure to roleplaying games are less likely to understand the context. So trying to organise a group of people into such a setting is more difficult than I realise at first.

In addition to that problem, one of the players finds the most enjoyable part of any game to be the extreme competition. He wasn't playing to win. He was playing to irritate the other players. In fact, he was so excited about cards in his hand that would stymie his opponents that he was paying no attention to the correct time to play those cards. Often, he would throw a card down on the table and shout, 'Boom!' Then I would have to inform him that it wasn't legal to play that card at that time. He would later look at me and ask, 'Now?' And when I said, 'Yes,' he would again throw the card on the table and shout, 'Boom!'


Which Games to Play at a Party

A better game for him might have been a co-operative game, like Pandemic. Although he would likely have still displayed rather... juvenile... outbursts of joy, they would at least have been directed at the invisible antagonist of the game itself, rather than at other players.

At another recent party, I played Betrayal at House on the Hill. Two of the other players were each fifteen years old. They were rather typical teenagers, who only wanted to 'hang out.' They were clearly not paying attention to the game. When one of them became the traitor, I should have known we were in for trouble. His objective was to kill the rest of us. Despite having a distinct advantage in his ridiculously high attributes, he did not approach the goal with any sort of logical approach. He would flee from the other players, or abandon his current target to run across the mansion and attack a different character. In this case, perhaps a simpler game with a more straightforward mechanic and goal would have been better.

As much as I love storytelling games, not everyone is good at them. They seldom make good party games.

Party games are also obvious choices. We've had a lot of success with Telestrations. It's easy, funny, good for large groups, and doesn't suffer too much from wandering attention syndrome. The Resistance (and The Resistance: Avalon) are also good choices. Although not funny, people are invested in the outcome. I remember the first time my friend Josie played. She had worked out who the villains were, but nobody would listen to her. When the minions revealed themselves and she turned out to be correct, she declared, 'We're playing again. I'm not letting it end this way.'

When playing games at a party, the most important thing to keep in mind is who will be playing. Obviously, if it's specifically a board game party (like the weekly game nights I used to have with my wife), you have more leeway. But in a normal party situation, greater care needs to be taken. Games that strongly appeal to 'serious' gamers like myself won't normally have much traction with other people.

Remember that the point of playing games is for everyone to have fun. Just because you like a game doesn't mean that everyone will. Try to find a middle ground where you can all enjoy your time together.

I think that's enough for today. I'll see you back here next week. Until then, stay warm, and remember to