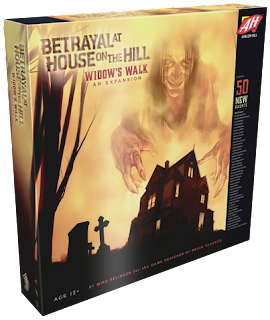 
An Overview of Widow's Walk

For those who don't know how the base game works and didn't bother to read the linked review: you are one of a group exploring a haunted mansion. As you move through the upper, ground, and basement floors, you draw tiles to see which room you discover. Most rooms make the discoverer draw a card. There are event cards, item cards, and omen cards. When you draw an omen card, you roll to see if you trigger the haunt. It becomes more likely to trigger the haunt as the game progresses. When you do, the room you're in plus the specific omen card you draw determines which scenario you're playing. Scenarios range from vampires to zombies to alternate dimensions to serial killers to giant carnivorous plants.

Widow's Walk adds 50 new scenarios to the 50 from the base set. It also adds a new level: the roof. There are new room tiles, new omen, item, and event cards. There are also new tokens for the new scenarios.

The main attraction of this expansion is the added scenarios. This, of course, makes the game harder to review, as you can't read the scenario until it's been triggered. Widow's Walk is still so new I've only been able to play one scenario from it yet. However, the authors of the new scenarios include some impressive names, including Anita Sarkeesian and Keith Baker. If you've played the base game as many times as I have, you start repeating scenarios. Having new ones to explore is a good thing in itself!

The mechanics of the game mean that sometimes, it's a little unbalanced. If you trigger a Haunt early in the game, one side or the other may have a serious advantage because so few rooms are out. If one player has taken a lot of damage and then becomes the traitor, he may find it hard to win. Alternately, if the traitor has taken little damage and found a lot of items when the Haunt begins, the other players may find it hard to win. Widow's Walk suffers this same problem.

But that's OK, because Widow's Walk, like the base game, is not about winning. It's about telling stories, exploring a mansion with a different layout every time, and the excitement of seeing which scenario you'll have this time!

This expansion adds a few new rules; some rooms have a dumbwaiter that allows you to move across the mansion in exciting new ways. The fourth level of the mansion adds some variety. But really, it's the new scenarios that are the biggest draw for this expansion. Although I have only been able to play one of the new ones yet, I'm very excited to see what other new ones there are. I, for one, am very excited to continue the newly expanded mansion to see what it offers.

And I think that's about it for this week! I'll see you here again next week. Until then, remember to