But the fact remains that teachers often use games for the explicit purpose of instruction. Not always are these skills the direct and immediate purpose of the game. A good friend of mine just started this year in her new position as a STEAM teacher (Science, Technology, Engineering, Arts, and Mathematics), and she acquired a copy of Clans specifically because she recognised the critical thinking skills that are sharpened as a result of playing that game, despite the fact that that was not the game designer's intention.

As a result of my trip to Gen Con a few years back, I am on the mailing list for a few companies' press releases. Most of these mailing lists are not of great interest to me; there's one, for example, from a company that does nothing but Dungeons and Dragons 5E releases.

However, a little over a week ago, I received a press release that I found to be quite interesting. It was from an organisation called Serious Play. This group organises conferences where people who design educational games can meet up with people who teach or train using these games. This press release announced the winners of several awards from the latest conference.

I thought it would be interesting to share these games with you, especially since none of them seem to be listed on Board Game Geek. We'll start with:

Four games were awarded a bronze medal. They include: 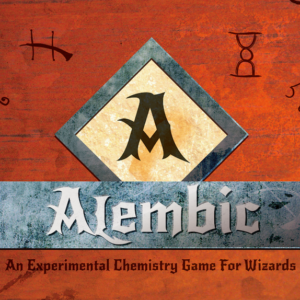 In Alembic, from Catlilli Games, players are presented with a mystery element, and must guess what the element is. They play cards and roll dice to 'test' the properties of this element, and when they think they know what it is, they guess. The first one to guess correctly gets points, but guessing incorrectly can be dangerous! Players balance their willingness to guess with incomplete information with the risk that other players might try to guess before they do...

This game is designed to help students learn chemistry, but by framing it as wizards performing experiments on the mystery element, it becomes more than just rote memorization! 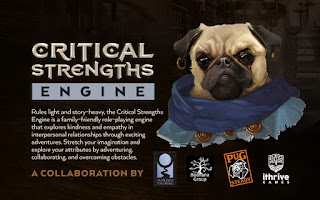 iThrive Games' Critical Strengths Engine is still in playtesting, but has already received critical acclaim! At its core, it is simply a rules-light roleplaying game, released in co-operation with the same companies that published the Pugmire rpg. However, instead of familiar attributes like Strength and Dexterity, it uses stats such as perspective (Mind), self-control (Will), and self-advocacy (Voice). This allows young gamers to learn improved social and emotional skills.

This game is designed to teach critical thinking and coding skills. Miner Madness by the Epic Project is a co-operative board game in which players must work together to help Owen and Penelope escape from the disgusting troll's cavern by navigating through the obstacles to collect gems, which they must give to the troll before time runs out and he eats them. Movement is accomplished via 'programming' using movement cards, similar to RoboRally. Players choose from 'forward,' 'turn right,' 'turn left,' 'forward two,' and 'action' cards to navigate, laying out five cards in order. Thus, they must plan ahead to see what actions will lead them to success and prepare their cards accordingly. 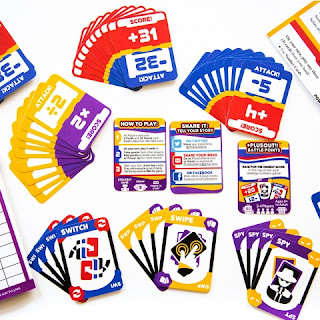 In +Plusout Battle Points by Imagination Gaming, players hone their mathematics skills by playing cards which can either add to their own score, reduce other players' scores, or perform other actions like swapping cards with other players or taking cards from the discard pile. Players start with six cards, and each turn, they draw a card and play two cards. Record scores as you go, and after all players have played their last card, the highest score wins.

One game was awarded a silver medal. That game was:

Although Roots of Power by Seriously Entertaining Education is in essence a simple roll-and-move game, it does more than just ask players to perform the task they're supposed to be learning. There are a variety of actions that must be performed depending on the space on which they land. The core of the game is asking players questions from various cards, all about word roots, suffixes, and prefixes, but this game changes it up by including 'crises,' which can be solved by discarding cards that were previously saved. Additionally, the questions are often phrased in the context of Greek Mythology, making them more interesting. And finally, it is possible to lose cards throughout the game, but these cards are all placed on the 'spoils to the victor' space, and are claimed by the first player to land on the finish space. Thus, winning the game is not always about being the one with the most knowledge of the subject being taught, which makes it more accessible to students of a lower skill level. 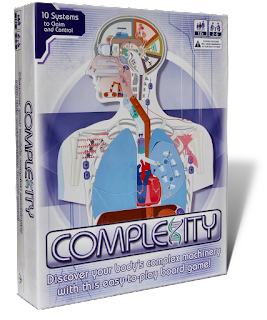 This game is intended to help students learn about the different systems of the human body. Complexity, by TechnoNature, involves the premise of being shipwrecked on an island and having to directly manage the various systems in your body in order to maximise the chances of survival. Players move pieces on a board and draw cards to represent random events with which they must deal. It has been praised for having more complex mechanics than most educational games, making it more enjoyable for players than other educational games. 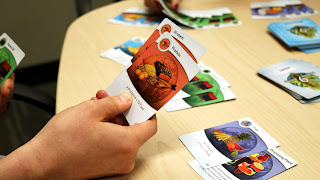 Feeding 9 Billion by Evan Fraser, the director of the Arrel Food Institute at Guelph University, is a pick-and-pass card game that is very strongly reminiscent of Sushi Go. Each player represents a different country trying to feed its citizens. Cards represent various types of nutrients, such as protein, Fat and Oils, and so forth. By collecting sets of these nutrients, they gain units of food to feed their populace. Certain cards can boost this, such as the Food Processing Plant, which triples the value of the next eligible card that you play. Additionally, some cards can allow you to earn money, which lets you buy assets to increase your distribution capabilities or grant you other benefits.

But what really makes this game unique is that it emulates increasing world population and climate change, through mechanics like increasing the minimum amount of food you need each round, and having random event cards which are more serious in effect the later in the game they are revealed.

I was surprised to see how interesting some of these games were. But perhaps more to the point, I was surprised (and more than a little pleased) to realise that there are some educational games that exist which students might actually want to play!

I hope that some of you reading this right now are teachers who are considering the potential benefit of these or similar games. I'm sure that any non-teachers will likely be less interested in them. But who knows? Maybe you know a teacher that might find these useful!

In any case, I hope you always remember to