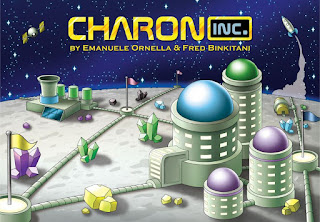 
An Overview of Charon Inc. 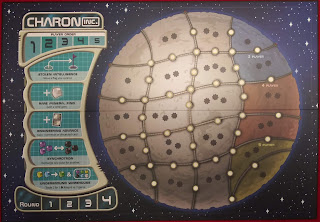 The game board is a representation of Charon, subdivided into 21 areas. These areas each have between one and three icons to indicate how many gems go in each one. Most of the spaces in the centre get three gems; the ones on the edge get two or one. The gems are distributed at the beginning of each round, such that the colours in each area are the same, but it is random which colour that is.

There are nodes on the borders between the areas, at the corners where four areas meet, and also in the midpoints between two areas.

Along the left side of the board is a track for player order, spaces for the five special actions, and a round tracker. Players each get seven flags in their chosen colour. One flag goes on the table in front of them to denote their colour. One goes on the player order track (chosen randomly at the beginning of the game), and one on each of the special action spaces. 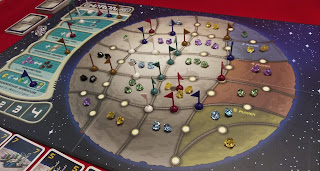 
The next thing you do is to claim gems. Look at each space on the board to see who has the most flags bordering it. The player with the most flags in the icons on the border of the space (or in that space) gains all the gems in the space. If there is a tie, the flags that border fewer spaces break those ties. If there's still a tie, no one gets the gems. 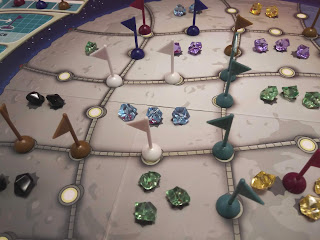 After all players have claimed their gems, the turn order is altered based on which player has the most gems. Then they may spend those gems to build cards, either from their hand, or from the common row. Finally, the flags are returned to the special action spaces, the board is re-seeded with more gems, the cards remaining in the common row are discarded, and new cards are dealt to each player.

Although there are no duplicate cards, in the sense of two cards that require the same combination of gems to build, all the cards that have the same victory point total also have the same name and the same base artwork (although with colours changed on the illustration). For example, one Power Plant card requires two black gems and one each of yellow, blue, and purple, whilst another requires two blue gems and one each of purple, green, and black. But both cards are worth seven victory points. Players are not allowed to have more than one copy of a card with a specific name. That is, once you've built a seven-point Power Plant, you're not allowed to build another, even though the others require different gems to build.

At the end of each round, during the reseeding phase, all players must discard all but two of their unspent gems. The exception is if you got the benefit of the Underground Warehouse action, in which case you're allowed to keep up to six of them.

After four rounds, players total up the number of victory points from the cards they have built. The player with the most points from their cards is declared the winner.

This game is super thinky-thinky. Trying to decide where to place your flags to maximize not only your chance of getting the gems you need, but also to prevent getting hosed by other players (and to hose other players yourself!) takes some serious brain power. It's also tricky deciding where to leave your last flag on the action spaces, both in the sense of what action you want to take, and in making sure that there's not too many flags on a space so you don't get denied an action altogether!

This game also contains a sizeable amount of screwage. John and Zeb used to play this game very frequently, and they often referred to it as the 'go f*@% yourself' game because a single well-placed flag can absolutely destroy another player's plans.

But before I get too much further, let's look at the six characteristics of a good game:


I put a question mark by that last one because this is absolutely a game that will not be enjoyable for people that don't like screwage. If you enjoy games where players take actions that are detrimental to other players, then you will think Charon Inc. is fun to lose. If you don't, however...

Anyway. So there you have it. My review of Charon Inc. I personally enjoyed it; thinky-thinky is definitely my gig. And I enjoy games with a certain amount of screwage, and Charon Inc. has just the right amount for me. But you might disagree! That's fine! But whatever you think of it, I hope that you always