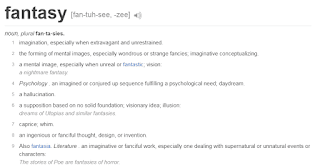 
The Origin of Fantasy


Before the 20th century, there was essentially no such thing as the fantasy genre. Stories involving magic and mythological beings existed. These were generally described either as 'mythology' or as 'fairy tales.' It was basically invented wholecloth by J.R.R. Tolkien when he published his book The Hobbit in 1937. Of course, he didn't see it as a fantasy story. He classified it as a fairy tale. And according to the conventions of the time, that's exactly what it was.

That specific setting later became so popular that others imitated it. In this way, the fantasy genre evolved into what we see today. There are a few exceptions; Game of Thrones has no non-human races. Jennifer Roberson's Sword Dancer Saga has little magic. The vast majority of that magic is based on sword fighting and singing whilst doing so. But the lion's share of fantasy works include the following:


And many others besides.


The Problem with Fantasy

Only one of the works listed above takes place in a non-pseudo-medieval world (Harry Potter), and even that has a lot of elements of the traditional pseudo-medieval. All of them follow the same basic world-building script. But look at the dictionary definition of 'fantasy' in the image at the top of this page! We see that the fantasy genre has little to do with what the word 'fantasy' actually means. There's not a lot of imagination. Though magic may be 'unreal' or 'fantastic,' there's little else about these worlds that is so. Dragons are so common they can hardly be considered 'fantastic.' There's not even a lot of caprice or whim in the fantasy genre.

There is the 'modern fantasy' subgenre. Most works in this category are from authors like Neil Gaiman and Cassandra Clare (the latter being the author of The Mortal Instruments series which has been adapted for television as the Shadowhunters series). There is some level of innovation in these volumes.

But that's just the point. With a name like 'fantasy,' there should be lots of innovation!

I am a fan of what I call 'true fantasy.' This is anything that closely resembles the first definition above:


Extravagant. Unrestrained. These words suggest that the mind should be set loose to dream and devise whatever fantastic and whimsical ideas it can envision.

There's not a lot of that in the standard 'fantasy' genre.

This is why I like the film The Dark Crystal. Although that film does not tell an amazing story, the world in which it takes place is truly new. No one had ever seen gelflings, mystics, skeksis, podlings, garthim, or landstriders before. Jim Henson let his mind free to imagine without restraint.

Mirrormask is similar; it tells the story of a truly unique world unlike anything seen before. The imagery and the characters in that film are extravagant, resulting from unrestrained imagination.

I've tried to create a true fantasy story myself. I've started writing a novel in which magic exists, but is very very rare. There are humans, but there are non-humans as well. The non-human races are unique, including the Staglings, who resemble people with deer heads.


Final Thoughts on the Fantasy Genre

It's not my intent to say that the traditional fantasy genre should be abandoned. It certainly has its merits. I just wish that people would feel less restrained to indulge in true fantastical dreaming. I, for one, think that the world needs more unfettered imagination.

But that's just my opinion. I could be wrong.

In the meantime, go forth, play more games, and keep dreaming. Dream big – dream fantastical – dream truly amazing and bizarre dreams! Find ways to work those big, fantastical, bizarre dreams into your games! Have fun with it! And of course,