Very shortly after I had posted my Resolution: Failed article on 30 December, a friend invited me to partake of a 10×10 Challenge. I had never heard of it, so I did a bit of research. It turns out that a few years ago on Board Game Geek, someone created this challenge to counteract what she called 'the cult of the new' (more on that in a moment).

Here's how it works: you play ten games, ten times each, over the course of a calendar year. There are two levels of difficulty: Normal and Hardcore. In the Normal level, you are considered successful if you play any ten games ten times. Just keep track of how many times you play any game, and if at the end of the year, you have at least ten games in which you logged ten plays or more, you succeed.

In Hardcore, you decide at the beginning of the year which ten games you're going to count. You only log those games (and any plays you may have had before you accept the challenge don't count).
Given the trouble I had with my Top 100 Challenge last year, I think I'm going to stick with the Normal Challenge. I have created a preliminary list, which you can see in my post on Board Game Geek. 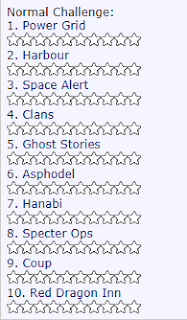 I chose these ten games, all of which I own, either because I really enjoy them, or because I feel that repeated playthroughs will deepen my appreciation for and understanding of them.

I had considered adding games that I don't own but need to play more to better understand, such as Terra Mystica or Scythe. But I don't want lack of availability to be an issue for me as it was with the Top 100 Challenge. If I end up playing something else more than the ones on my list, however, I can always swap it out.

Most people will keep track in the BGG post itself. Each time they play a game, they'll go back and edit it to change one of the white stars to yellow. Others are a little more... elaborate... in their record keeping. For example, I present to you this wooden progress chart used by the Clay Crucible blog: 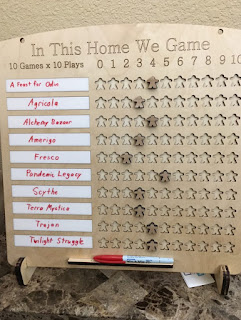 Apparently, that item is available to purchase from the Etsy shop Daft Concepts. The design is slightly different this year; I think I like the version shown above better. Still, it is very pretty.

For my part, I'm going to use the image I posted at the top of this entry. I created it using the Retro Wave Effect Generator over at PhotoFunia, and then added the curved tracks on either side in GIMP. I printed this off, and am using poster putty to affix markers to each track, moving them one space away from the centre each time I log a game play.

You are welcome to print off a copy to use yourself. If you want to take the Hardcore Challenge, feel free to add the names of the games you're using in whatever image editor you like before printing it off.

I will be keeping track in my BGG post as well, and for anyone interested, I will be logging pretty much every game I play this year, so you can see what I've played regardless of what I end up using for the 10×10 Challenge.

I mentioned above that this challenge was created in response to 'The Cult of the New.' I've referenced this phenomenon previously (although I didn't use that phrase), when I complained about how there are so many good new games coming out so frequently that I often feel like I'm only ever able to play a game once before we move on to trying out the next new thing. That was, in fact, a part of the problem with the Top 100 Challenge, and tied in to the frustration I was feeling towards economic development games (like the aforementioned Terra Mystica and Scythe), in which I was not getting an opportunity to learn the intricacies of the game and its strategies.

The 10×10 Challenge, on the other hand, encourages you to really get to know some games. By playing a select few games over and over, you really get to understand how it works, how to play, and how to approach the strategies and techniques involved in the game. This excites me, and I am very much looking forward to becoming quite conversant with some really good games.

So, here's to hoping I have more success with the 10×10 Challenge than I did with the Top 100 Challenge. I hope you are successful in your Challenge as well, and whatever happens with it, I wish you to always