If you're looking for a fun game that's fairly simple to learn but pretty deep in terms of strategy, then Plague Inc. certainly delivers. As I've been able to play it twice now, I will review it for you that you may decide if you want to play it yourself.

One quick note before we get started: I have created a YouTube channel. There's only one video there right now: a How To Play video for the Red Dragon Inn. It's a little rough; I learned a lot in creating it which will allow my later videos to be even better. I plan to create and upload more videos in the future; I'm already working on a How To Play video for the new Dark Crystal board game. So if you're interested, hop on over and subscribe so you don't miss anything!

Now that that's out of the way, let's start with the numbers:


An Overview of Plague Inc. 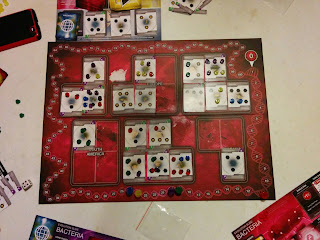 This game is, in a sense, the inverse of Pandemic. Instead of playing doctors trying to cure diseases, in Plague Inc., you take on the role of a disease trying to wipe out the world. Each player starts with a basic disease, which they can upgrade with new genetic traits, and spreads from country to country, gaining points for controlling countries and for wiping out the population of a country. After the deck of Country cards has been exhausted, play continues for a few rounds and then the player with the most points is declared the winner.

Like I said, a fairly simple game. But it can be pretty challenging despite that simplicity! 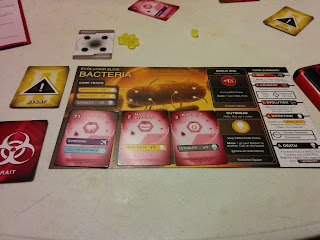 Each player has a play mat called an Evolution Slide, which can be seen in the photo above. This play mat is basically just a space to keep your disease's new traits. As you purchase Trait Cards, they are placed in one of the available spaces on your Evolution Slide. There is also a turn summary along the edge of the play mat to make it easier to remember all the steps. Of course, as we played, we kept forgetting steps anyway...


A Turn in Plague Inc.

The first thing you do is to score DNA points. You gain one point for each country you control (you control a country if you have the most tokens in that country; it still counts if you are tied for most), plus one bonus point if you have not yet placed a trait card in the Bonus DNA space on your Evolution Slide.

There are three Country cards available on each turn. You may either choose one of these cards or draw, unseen, the top card of the Country card deck. Whichever you do, you may either place that card on the board in the appropriate region, making that country available to infect, OR you may discard that card in order to discard all the Trait cards currently in your hand and draw five new ones.

You may place a number of tokens equal to your current Infectivity rating on the board. This rating starts at 2 as a result of your core traits, plus whatever bonus you get from Trait cards you have purchased. You must be connected to a nation into which you are placing tokens. You are connected if the nation is the same continent as a country that you already infect (that is, in which you already have at least one token). You are also considered connected to a country that has the Airport icon if you infect another country with the Airport icon and you have the Airborne trait. Likewise, all countries with the Port icon are considered connected for a player that has the Waterborne trait.

Additionally, you must be able to survive in the climate. Most countries are neutral; the cities (the black hexagon icons on the Country cards) have no icons on them. Anyone may move into these spaces. Some Country cards, however, have either a sun icon or a snowflake icon on all the cities in their card. You may not place a token on one of these cards unless you have the Heat Resistance trait (for the sun icons) or the Cold Resistance trait (for the snowflake icons).

At this point, you look at the board to see which countries you control (have the most tokens in) that are completely infected (there are no empty cities on that card). You roll the Death Die (a beautiful six-sided die that is flecked with red speckles), and if the result is less than or equal to your current Lethality rating, that country is eliminated. The player who eliminated the country takes the card; all players gain one DNA point per token they had in that country and gain an Event card. Your Lethality rating starts at 1 due to your core traits, but Trait cards can have the Lethality +1 ability, which raises your rating.

As a result of eliminated countries, you can gain Event cards, which have a number of interesting effects. Each card tells you what it does, and when it can be played. Most are played either at the beginning or end of your turn, but some can be played during a specific phase, and others are triggered in certain circumstances (for example, there's a card that can be played when you roll to eliminate a country but fail to do so).

It really seems like a very simply game, and the rules themselves and the actions taken on your turn are. Randomness does play a pretty big part in the game, through the Country cards, Trait cards, and Event cards that you draw, as well as rolling the Death Die to see if you eliminate a country. But there are ways to minimize this randomness (purchasing Traits that increase your Lethality, for example), and there are always significant strategic decisions to make (do you place a single token into this country that has one city icon remaining in the hopes of getting one DNA point and an Event card when the country is eliminated, or do you place it in that country that has five available spaces, but will ensure that you have control of that country?). It is this depth that makes the game fun to play.

But what about the other characteristics of a good game? Let's take a look:
I say that last one because, especially in the game we played recently, one player got a pretty distinct advantage in the cards that she drew early on, and was somewhat ruthless in her aggression towards other players, ensuring that she had a strong lead which could never quite be overcome. This may be an isolated case, as the laws of probability indicate that such events are likely to occur from time to time. But given that I, as a player, tend to prefer games in which my actions have the ultimate determining factor in the outcome, it felt very much like the good cards that she drew at the beginning prevented anyone else from really having a chance to win. And that made the results of that game feel a good deal more enraging than anything else.

That said, I don't think it's a bad game. As mentioned, laws of probability suggest that such outcomes should be the exception rather than the norm. But it is still a possibility, so I'm not sure I can grant that one to this game. Still, a pleasant overall game that I wouldn't say you shouldn't buy.

So, I hope you enjoyed this review. Have fun out there playing games, as long as you always remember to

Email ThisBlogThis!Share to TwitterShare to FacebookShare to Pinterest
Labels: board game, how to play, photos, Plague Inc, review, video, YouTube