PinkFae Archive #9: Changeling: The Dreaming - Why I Love It So Much

Welcome, gentle readers, to another PinkFae article. This one refers to Archive #8, from three weeks ago. It was originally published on 28 February 2016, just one week after Archive #8. 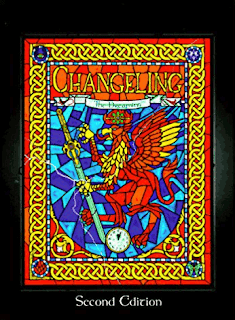 Last week, I wrote an article about the tabletop roleplaying game Changeling: the Dreaming. Included in that article were links to descriptions of the setting and in-game history. Anyone who is familiar with the Storyteller System (the original World of Darkness in particular) already knows the basics of the system. But what I didn't describe was why I am such a fan of the game. So I think I will do that today.

As mentioned, Changeling is a game in which you play faeries. Just in case you missed it, we're not talking about Tinkerbell; the original Celtic faeries were no diminutive sprites! Many of the creatures that we know from modern fantasy were originally a part of the fae mythos: elves, dwarves, goblins, trolls, merfolk, and many more besides. The monstrous Nuckelavee, the enchanting Lianhann Sidhe, the helpful brownies... Even the banshee originated from the Irish bean sidhe (which is pronounced ban SHEE); she didn't have the ability to use her voice as a weapon, but her crying was an omen that whoever heard it was going to die soon.

The game is based on the idea that the fae were born of dreams. Not just the visions that appear to us as we sleep, but of ideals and aspirations. Hope, love, creativity, friendship; all of these combined to create the energy known as Glamour, which was the genesis and sustenance of the fae. Changelings can possess items made of Glamour, or interact with creatures born from Glamour. These beings and objects are known as chimerae, and they can take any form imaginable. They can be mundane (such as a knife or a book) or fantastical (like a hat that transforms its wearer into a dragon). They can be simple (like a pebble) or complex (like a living castle that talks to its occupants and shifts its corridors to different rooms to confuse or aid those walking around inside of it). They can be minor companions (perhaps a bee that buzzes in a higher or lower pitch depending on whether the person to whom it's listening is lying), or full-blown characters in their own right (such as Samuel, a giant twenty-metre long mane-less lion with bat ears, goat horns, and bird wings, who is on a quest to find his missing companion).


The possibilities of being fae

Given that changelings live in a world where chimerae are common, they can inhabit nearly any persona they desire. Most court functions follow the high-fantasy standard of kings and queens in sumptuous palaces with courtiers including dukes, barons, jesters, scribes, and troubadours. Other changelings prefer a more modern idiom. Still others inhabit a more futuristic milieu, like Sarah Storm, the piskey with a cybernetic eye and a sentient cyberdeck.

Things get even more interesting when a changeling enters the Dreaming. The Dreaming is a sort of spirit world, made entirely of Glamour, that is constantly shifting and morphing. The further into the Dreaming you travel, the more frequent and dramatic are the changes wrought by the Firchlis, the wave of transformation that sweeps throughout the realm. All dreams are represented here for at least a short time. If a human dreams it, it exists, at least momentarily, somewhere in the dreaming.

Now just imagine how many humans have dreams about Star Trek. You know there's a chimerical version of the Starship Enterprise floating around the Dreaming somewhere!

In fact, wouldn't that be a fun game? To play a changeling on the Enterprise? Maybe you could have a sidhe (the elven characters) who has embraced logic and controlled her emotions sitting at the science station. Perhaps there's a nocker (the mechanically adept fae) in the engineering section. What if there's an eshu (the adventurous daredevils) sitting in the captain's chair? And each of them is armed with a chimerical device that looks and functions like a phaser...

And that's just the beginning. With such endless possibilities in any person's dreams, you can have all sorts of interesting stories! One game I ran involved the characters travelling through the Dreaming and finding two cities across the river from one another: Eskaru, a high fantasy sword-and-sorcery style medieval walled city, complete with castle and smithies, and New Summit Grid, a sprawling cyberpunk metropolis, populated with robots, cyborgs, street samurai, and futuristic weapons and devices. The two cities had originally been miles apart from one another, but over the years, the subtle changes of the Firchlis had slowly brought them closer and closer to one another, until the river and a small field were the only things separating them. Tensions between the two cities were growing, and it fell to the players to decide how to handle the impending conflict.

I once tried to get involved in the Changeling forums on the White Wolf website. I still remember someone on there complaining about how Changeling is a medieval-fantasy game, and insisting that all characters must fit within that idiom. I tried to explain that that mindset ran counter to the (very strongly and frequently emphasised) theme of creativity that runs through the main rules and most of the supplements. But he would not be swayed. Which is a shame. When you can have a satyr dressed as a pirate on shore leave from his ship on the high seas travelling with a horse pooka (the pooka each have an affinity with a specific animal, and have some of the physical features of that animal, such as ears or a beak or eyes or what have you) who's recently deserted his Roman legion, accompanied by a clurichaun (basically a leprechaun) wearing a space suit, travelling through the Wild West fighting gunslingers, how can that not be a tale of epic fun?

Many people disliked Changeling. It was, after all, part of the original World of Darkness, along with such dark offerings as Vampire: the Masquerade and Werewolf: the Apocalypse. Those games were very gritty, very dark, very morbid. Changeling was not. Fans of the first four games in the WoD (Mage: the Ascension and Wraith: the Oblivion in addition to Vampire and Werewolf) did not like the bright, whimsical nature of Changeling. They wanted the dark gothic-punk grittiness of the other games.

But they missed a very important detail: although the horror of the other games was blatantly obvious, Changeling was not without its own variety of horror. In Vampire, players explored the horror of trying to hold on to their humanity in the face of having become a blood-sucking monster. Werewolf was about the horror of fighting a war that they ultimately knew to be futile and doomed to failure, and the rage that such impotence engenders. Players of Mage experienced the horror of knowing the truth about the nature of reality but, despite having phenomenal cosmic powers, being completely unable to share this knowledge with the common man, or to improve his lot in life. In Wraith, you faced the horror of finding yourself trapped in an afterlife of torment, unable to move on to your final reward because you have some Unfinished Business left in the living world.

How do these horrors compare with the colourful and fanciful setting of Changeling? When you have a companion who is literally able to turn into a fluffy bunny, can the game really be said to belong to the horror genre? But Changeling is not without horror; its horror is simply more subtle (one could even say sublime) than that of the other games. It is the horror of loss.

Changelings, after all, are now tainted with the 'Banal Shiver.' This is a measure of Banality (the energy of disbelief, of despair and dreamlessness, of cold rationality and lack of wonder, that is opposed to Glamour) that infuses all changelings, all least to a small extent. Because of this, they can never return to Arcadia, their ancestral homeland which lies at the heart of the Dreaming. And even with the wonder and joy that they can experience as beings of Glamour, they never go long without the knowledge that, at some point in the past, they were so much greater than they are now. By clothing themselves in human bodies to protect themselves from Banality, they have lost a great measure of the power they once possessed. They are no longer wholly fae; they are now part human. And that knowledge will always vex them, like a distant half-remembered memory that they cannot recover, try as they may.

Anyway, that's a relatively brief description of what I love so very much about Changeling: the Dreaming. I hope you found it interesting, or at least informative. I will leave you with that for now. Until next week,