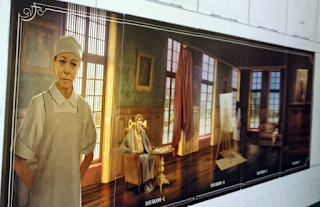 Then, players choose which part of the room to explore, and which person to approach, by turning over the appropriate card and reading what it says on the back. The card describes what happens, what the person says, if there are any challenges that must be overcome (such as combat with the person, or rolling to find a hidden item, and so forth), and anything else that happens. If the players come into possession of an item, the card will say, 'Draw Item Number 23' (or whatever card number is appropriate).

By choosing what actions to take, and where on the overall mission map to go, players are given clues that will lead them to the story's eventual resolution (a word of caution, though: some clues are red herrings, and lead to dead ends, causing the players to waste the limited amount of time they have to perform their mission before they are recalled to the future).

And that's where the problem comes in: if players are unsuccessful in their first attempt to play through a story, they can try again a limited number of times with some of the knowledge they've already acquired. And it's almost guaranteed that they will fail the first time.

In this first mission, for example, if you run out of time before completing the mission, the T.I.M.E. Corps Director will send you back a second time. If you still don't complete the mission, he sends you back one final time under a 'Condition Red' status, which suspends the time limit, but places other restrictions on you. When you complete the mission, you read the appropriate 'Mission Successful' card (depending on whether you finished on the first, second, or third attempt), or you read the 'Mission Failed' card (there is a 'Mission Failed' card for each way the mission might fail: if all the agents die, or you make a bad decision and fail to prevent the temporal anomaly, or so on).

But once you've played through this mission, you can't play it again. You already know where everything is, what the important clues are, which characters to talk to and which to avoid, and so forth. In order to use your T.I.M.E. Stories set again, you must purchase one of the expansions, which contains a new deck of cards that allows you to simulate a new mission.

That's something that I've never cared for. I prefer games that can be played an infinite number of times. This means that I like games such as Red Dragon Inn, or The Resistance: Avalon. Even Balderdash has high replay value, because there are so many cards that even if one player sees them all, it's highly unlikely that he'll remember all (or even most) of them.

On the other hand, games like Malarkey, which ask players to guess which answer to the 'Imponderables' question is the correct one, even lose their replay value after a time. Once you've seen every card in the set, you know all the answers.

This is part of what I don't like about many video games, as well. Once you've finished a game, it's seldom enjoyable to play it again. Sure, some recent video games are using the branching story method, where the decisions you make in the game determine which ending you get. Once you've finished a game, you can play it again making different choices, and you will get a different ending.

But I still prefer games that give you different stories every time. I like sitting down for a rousing game of Hot Tin Roof, not knowing who's going to win, where each player is going to put their shelters and catwalks, not knowing what decisions are going to be available. Yeah, it's the same game. But every time you play it, it's new, and you don't know any of the crucial information before hand.

Anyway, that was what I was thinking this morning. Some people, of course, enjoy that sort of experience. Millions of people purchase new video games, play it through, then sell it back to the store and buy a new one. Obviously, it has some sort of appeal for somebody! Just not for me.

So go have fun playing games, whether you replay them or not. I will see you back here next week, and until then,