The point of Push a Monster is to do exactly what the title says: push a monster. The game consists of five components: monsters, monster tokens, a die, a table, and a monster pusher. It looks something like this: 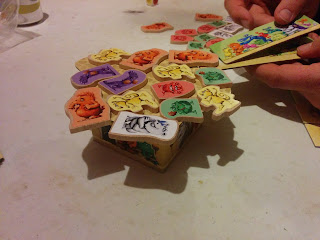 The game starts with the two purple monsters on the table. On your turn, you roll the die. Five sides show one of the five main monster colours: white, green, yellow, orange, or red. The sixth side is a question mark. Whichever side the die shows determines which colour monster you must slide onto the table. If you roll the question mark, you get to choose.

You take the monster pusher, which is two rectangles made of cardboard, one slightly longer than the other. Place a monster of the appropriate colour on the longer one. Then use the shorter one to push the monster onto the table. You must slide it on, so that it does not sit atop any other monster.

Very quickly, the table starts to get crowded. Eventually, someone will cause one or more monsters to fall off the table. When that happens, all other players get a token in the same colour as the monster(s) that you knocked off.

These tokens are of varying widths. The red one is the narrowest, with the green one being just slightly wider. The white and yellow ones are next, followed by the orange. The purple ones are the widest of all, but they are also the rarest, as there are only two of them, and they both start already on the table. In a sense, the wider the token, the more 'points' it's worth. But remember, every time you knock a monster off the table, you're giving these 'points' to the other players. So if you have to push someone off, it's better to try to shove a red or green monster out, and avoid pushing the purple ones off if you can avoid it at all.

The game goes until the die rolls a colour that is not available (because they're already on the table) or until one colour of the tokens is gone. At that point, all players line their tokens up. Whoever has the longest row of tokens is the winner.

It's a very simple game. It's great for kids, and if you're in the mood for a nice easy game that doesn't involve a lot of thinking but you don't want to play a luck-based game, then Push a Monster certainly delivers. The monsters are kind of cute (and regarding the asterisk on the Humour rating above, I wouldn't say that the artwork is humorous per se, but the cute paintings can be a source of a mild chuckle. Certainly, it's fun to draw comparisons to various animals. For example, the orange monster has some sort of elephant trunk, and the white monster appears to be related to the rhinoceros in some way).

Anyway, I think it's a neat little game that can be fun in the right circumstances. Don't be afraid to give it a try! And with that, I bid you