We come once again to a PinkFae archive. This article is another board game review. It was originally published on 12 November 2016. 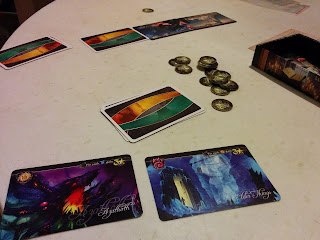 Earlier this year, Portal Games released a Cthulhu-based card game called Tides of Madness. It was a rework of their game Tides of Time, which was released last year. It's a surprisingly enjoyable game, given that it consists entirely of eighteen cards and a handful of tokens. I got to play it a couple of weeks ago, so I will review it for you today.


An Overview of Tides of Madness

This is a very quick and easy game. It's great for when you're killing time waiting for other players, or between games, or any other time you have just a few minutes but want a nice meaty game.

Here's what you have: a deck of eighteen cards, each named and illustrated with a location, object, or entity (or group of entities) from the Cthulhu Mythos. These are divided into five 'suits' of three cards each, with three extra cards of no suit. The suits include:

In addition, there are several round tokens marked with Cthulhu's head and wings.

The game consists of two players taking turns over three rounds to try to gain the most victory points.


Game Play in Tides of Madness

You start by drawing five cards each. Players choose one card, which they reveal simultaneously. They then pass all the remaining cards to their opponent. Again, choose one to reveal simultaneously. Pass the rest. Continue until both players have played five cards and there are no more left to play. Players then score their cards. Choose one of the cards you've played to keep, and one to discard. Draw two more cards from the deck. Play the second round identically to the first round, except you'll play the card you chose to keep first, and will play a total of six cards this round. After playing and scoring the second round, choose a second card to keep and discard another card before drawing two more. This means that you'll play a total of seven cards in the third round.

At the end of the third round, you'll total up your points from all three rounds. The player with the most wins.

Other cards have different effects. Some cards grant you VPs for sets (for example, the Deep Ones card grants you 6 VP for each set of 1 Great Old Ones and 1 Manuscripts card you have). Innsmouth grants you 3 VPs for each suit you don't have. And so forth.

In addition to victory points, some cards have some translucent tentacles on the left edge. For each card with these tentacle icons, you must take a madness token (the ones with Cthulhu's head and wings). These can sometimes be beneficial; for example, the Necronomicon card gains you 1 VP for each madness token you have. But you must be careful with these; if ever you have nine madness tokens, you lose the game immediately.


Final Thoughts on Tides of Madness

This sounds like a really simple game. The rules are simple, to be sure. But the game holds surprising depth! Each turn holds a careful decision. Since there is only one card that can possibly score on itself (all the other cards score for a different suit than itself), you must plan ahead for what cards you think you'll be able to play on a subsequent turn. Either that, or you must choose a card that enables you to score on a card you've already played, knowing that the card you're playing won't score you anything on its own.

This level of planning and predicting gives this short, simple, easy game a surprising amount of depth. Sadly, it's a two-player only game, and I seldom have an opportunity to play two-player games. My only other problem with the game is that the cards are oversized (79 × 120 mm, or 3.1 × 4.7 inches), which can make them hard to shuffle and handle. However, this is offset by the fact that, if the cards were any smaller, the beautifully deep and lush artwork would be harder to see and enjoy. So I'm going to give this game a pass on that aspect.

Anyway, I enjoyed Tides of Madness a lot. I doubt I'll need to own it, primarily because I have so few opportunities to play 2-player games. My board game collection holds more 2 player games than any other range of player numbers, but those are the ones that get played the least often.

But don't let that stop you! Give it a try! You may find you have more opportunity to play than I do, and I'd hate to see you miss out on this fun and beautiful little game!

So, with that, I bid you farewell. Remember as always to