PinkFae Archive #40: Descriptive vs Statistic: An Evolution in RPGs

Today's article is another entry from the PinkFae archives. It was originally published on 5 November 2016. 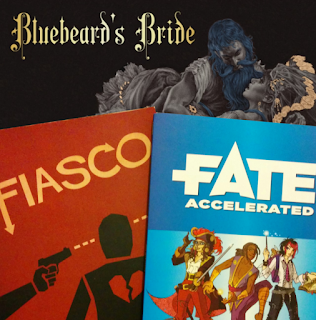 Last week, when I posted the interview with Whitney Beltrán, I had to cut out a lot of material. The transcript of our conversation was over 5,000 words long. I usually try to post articles of around one thousand words. Generally, I keep a thousand five hundred as an upper limit. Even cutting out entire sections of the conversation, it was hard to get the article down to two thousand words. This is especially disappointing to me, as there were some really interesting topics that I had to remove entirely. The interview I posted absolutely stands on its own. It does a great job of communicating the important aspects of the game. But one of the topics I had to eliminate was a discussion of the evolution of roleplaying games. In particular, we discussed how roleplaying games are becoming less statistics-based, and more descriptive.


The important part of the interview

Here's the relevant section of the interview:

PF - I've noticed that there's been an evolution in the roleplaying game industry. The past several years, they've started moving away from the statistics, and rolling dice to complete an action, like the traditional games. Fiasco, for example. That's a very different game, that doesn't have any statistics at all, it's very narrative driven. And games like Fate, where you might have statistics, but they're not necessarily the same sort that you would normally find in a game. Bluebeard's Bride seems to fit into that category. Was that intentional?

WB - So, on my part, and I can't speak for my two co-designers, but 'yes.' I believe that games should be accessible. I believe that if someone is brand new to games, and they want to play and have a good time, they should be able to pick up a game and be able to do that immediately. You know, I love myself a good THAC0 table, but it is not conducive to getting new people into our space, into being part of our community. And I want the community to be big and robust and healthy and diverse, and I think that the more games we can put in front of people and make easy to play while still being incredibly enjoyable, those are the games that I want to see, personally speaking.

I think it takes all flavours. I think D&D and all of its analogues will always have a place in the gaming industry. They're not going anywhere. But I think that more and different games is almost vital to making sure that this arena of culture that we love so much continues to survive and thrive.

Most roleplaying games have a set of numbers that describe the core attributes of a character. This includes staples such as Dungeons and Dragons and Vampire: The Masquerade. These games have a set of numbers which describe the character's basic characteristics. These are normally called 'Attributes.' Games have had a wide variety of attributes over the years. D&D uses Strength, Dexterity, Constitution, Intelligence, Wisdom, and Charisma. Vampire and its sister games use Strength, Dexterity, Stamina, Charisma, Manipulation, Appearance, Perception, Intelligence, and Wits. GURPS uses four primary attributes (Strength, Dexterity, IQ, and Health) with five secondary attributes (Willpower, Perception, Basic Lift, Basic Speed, and Basic Move).

In each case, these are rated numerically (in both D&D and GURPS, from 1 to 20, and in Vampire, from 1 to 5). These numbers provide absolute measures of the character's abilities. Often, they serve as targets for dice rolls. Furthermore, such games have a list of skills that a character may possess. Skills generally have similar numeric ratings. We can describe games that use these systems as 'statistics based.'

Conversely, some newer games do away with these statistics. In Fate, for example, rather than attributes, there are 'aspects.' These describe the character in descriptive terms. Some examples include: 'Grew Up in the Thieves Guild,' 'Good Friends with the King,' or 'A Price on My Head.'

In Bluebeard's Bride, most of the characteristics come from answers to a series of questions (such as 'What loving gesture did Bluebeard make when you first met that won you over?'). This helps guide players to know the personality of their character.

Fiasco uses none of these. Players define their characters entirely by the relationships they have with the other characters.

These games are 'Descriptive.' They describe characters in abstract terms, rather than absolute values.


Why does this matter?

Descriptive games are geared towards telling a good story. By developing the characters' personalities and providing plot hooks, the game is moved towards a narrative. Statistics games are more tactical. Firstly, because they have numerical values, players tend to see characters similarly to athletes. Saying that a character has a Dexterity of 17 is similar to saying that a pitcher has an ERA of 2.09. Secondly, because physical characteristics and actions are easier to quantify than mental or social ones. Because of this, statistics-based games tend to lend themselves more to combat. I spoke of this a little bit in an article on my other blog: A Close Look at Combat and Other Systems.

There's nothing wrong with either descriptive or statistics-based games. Whichever you prefer is fine. I'm certainly not going to tell you what kind of game to play. Nor would I tell you why to like a game. But as a Storyteller player type, I am very excited. The rise of descriptive roleplaying games intrigues me greatly.

That's all for this week. Next week will be another board game review. Don't miss out! Until then, have fun, play games, and remember to