Board Game Review: Architects of the West Kingdom 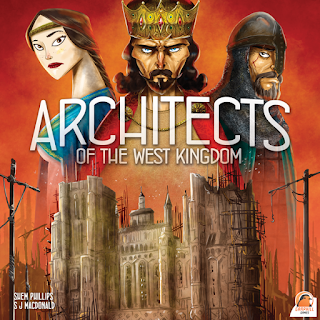 I am pleased to report that Architects of the West Kingdom does not suffer from these annoying factors. I was pleasantly surprised by this game, and I ended up enjoying it quite a lot. So for today's entry, I will review this game. Starting, as we always do, with the numbers:


An Overview of Architects of the West Kingdom 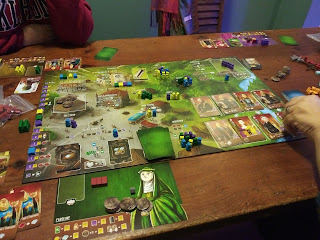 Players take on the role of architects in the late Carolingian empire, working together to build a new cathedral and working individually to build smaller structures, all for the purpose of maintaining their noble status by impressing the king with their efforts.

The board represents the town and nearby environs. There's a reputation track along the left edge of the board, spaces for apprentice cards in the lower right corner, and a space for the buildings deck. Otherwise, the board is taken up with spaces to put your workers. Each player gets a player mat; one side allows you to play with identical player powers, and the other introduces some level of asymmetry by making each player slightly different in starting resources. Players get twenty meeples to serve as their workers. There are tokens to represent the various resources: ore, clay, gold, lumber, and marble. Black market cards, favour cards, debt cards, and silver coins complete the components for this game.

Unlike most worker placement games, which give you a small number of workers to start and allow you to increase the number of workers you have available as the game progresses, Architects of the West Kingdom gives you all twenty at the start. You simply have to manage those throughout the game. Once you place a worker, it does not return to you until you take an action to retrieve it. But other players may capture your workers as well!

Additionally, most of the spaces have no limit on the number of meeples that may occupy that space. The only exceptions are the black market, which has three spaces that may have only one meeple each, and the Guildhall, which is not a single space, but four rows of six spaces (some of which are ignored in games with fewer than five players).

Other locations grant you a 'per meeple' benefit in some other way; for example, the Guardhouse lets you take one action per meeple, so if you place a fourth meeple at the Guardhouse, you may (for example) turn in captured meeples from your player mat, release your meeples from prison, and retrieve your captured meeples from two other players. Be careful about having too many meeples at any one location though; other players may be tempted to capture your workers with the Town Centre action.

Permutations in Architects of the West Kingdom

Winning Architects of the West Kingdom

Once the Guildhall track is full (twenty four total meeples in a five player game; reduce that number by four for each player fewer than five), all players get one final turn. Each player counts up their victory point total from building cards, the cathedral, and reputation. They gain an extra point for each gold or marble token they have, and for every ten silver they have. They lose two victory points for each unpaid debt they have, and they lose one for every two meeples they have in prison. The player with the most points is declared the winner.

Final Thoughts on Architects of the West Kingdom

As I said, I was pleasantly surprised by this game. Normally, when I play worker placement games, I find myself getting frustrated because I can't take the action I want to take, either because someone has already taken that action and made it unavailable to me, or because I don't have enough workers left. But Architects of the West Kingdom does away with that problem, by not limiting the number of workers that can occupy most of the spaces, and by giving me a reasonable number of workers to start the game with.

But let's look at the final test: the six characteristics of a good game.
I was tempted to put a question mark by the 'it's relatively simple' one, as the actions available at each space can be pretty diverse. It can be a lot to keep track of, remember what's possible. The iconography is very helpful in that it details what's available, but it's not as intuitive as would be ideal. Once you've played the game one time, the icons become much easier to understand, but it took me (and the others playing with me) a few turns to really get the grasp of what they all meant.

Still, if that's the only complaint, I think we're doing pretty well! But as always, I hope I have provided you enough information to decide for yourself if you want to give it a try! And whatever choice you make, I hope that you will join me again here next week, after you promise to always

Email ThisBlogThis!Share to TwitterShare to FacebookShare to Pinterest
Labels: Architects of the West Kingdom, board game, photos, review