I realised recently, much to my surprise, that I hadn't yet reviewed Santorini, published by Roxley Games and Spin Master Games. Let's fix that right now, shall we? 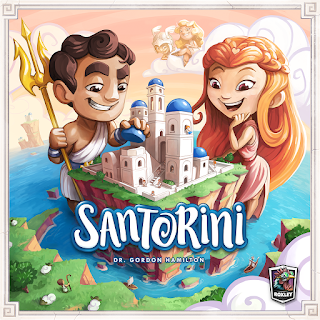 This is a surprisingly deep and thinky-thinky game for as quick and simple as it is. It feels like it was designed as a kids game, and although the rules are simple enough that children can easily learn to play, there's enough strategic depth to satisfy most adults.

But let's not get ahead of ourselves, shall we? Let's look at the numbers:


An Overview of Santorini

This game is actually a re-release of an earlier version. The original was released in 2004, and was simply a series of white wooden blocks in various shapes. According to Board Game Geek, it was a self-published game. But in 2016, it was rereleased by actual publishers, with a major upgrade in aesthetics. The nominal theme of the game is to build the white buildings with blue domes that are typical of some of the cities on the Greek island of Santorini. Here's a photo of one such city (specifically, the city of Iola):

By comparison, here is a photo of a game of Santorini in progress: 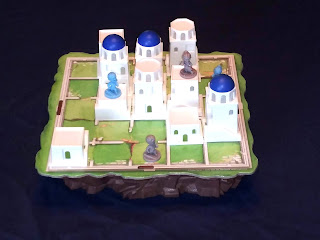 So the new version definitely has a significant advantage, attractiveness-wise. But of course, looks aren't everything; how does it play?

Santorini is an abstract strategy game. There is no randomness whatsoever in the base game; players start by taking turns placing their workers (the pawns they use in the course of the game) on the board in any unoccupied square. Each player has two workers (except in a four-player game, where players are on two teams of two, and share both workers of their colour).

After all the workers are on the board, a turn consists of moving any one worker of the active player's colour one space in any direction, and then placing a level of a building in any space adjacent to either one of the workers (the one that moved or the one that did not).

Buildings consist of three levels and a dome: 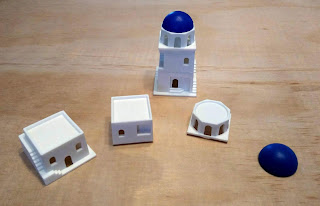 When building, you simply place the next lowest level of the building that is not already present. That is, you'll put the lowest level in an empty space; if there's a single level in the space where you want to build, you put the second level on top of that; if the space has two levels, you add the third level to that, and then you may put the dome on top of a building that has three levels. Nothing may be added beyond that.

Players move around the board, strategically placing their workers and building buildings, until one player is able to move one of the workers onto a building that has three levels. That player is declared the winner.

As I said, it's a very simple premise. But there's a lot of strategy involved; preventing your opponent from moving up, whilst also manoeuvring yourself into a position to reach that coveted highest level and claim the victory. It's surprisingly thinky!

But then, to make it even more interesting, the game comes with a series of God Power cards. Each one is named after a character from Greek mythology. Here are a couple of them:

The rules state that the most 'god-like' of the players chooses which cards to use in a game, and each player then gets to choose one of those cards. What exactly a 'god-like' player is, I don't know, and the rules don't go into any detail on this. So effectively, I think it's safe to choose cards in whatever method you prefer.

But the god power cards come in two levels: Simple and Advanced. The simple cards are a bit easier to understand and don't have as big an effect on gameplay. In the photo above, Hermes and the Minotaur are of the Simple level, indicated by the flower in the lower right corner. The blue spiral icon on Zeus and Chronos indicate that they are Advanced cards.

Whichever card you have determines what additional ability you have in the game. Hermes, above, grants his player the ability to move an unlimited number of spaces around the board, as long as that player does not move up or down any levels when doing so. The player with the Minotaur card is allowed to move a worker into a space occupied by another worker; that worker is pushed one space away in the same direction as the active player's worker moved.

Zeus's ability allows the player with that card to place a level of a building on the space occupied by that player's worker. Effectively, one worker is building underneath itself. Chronos's player gains an additional win condition: if there are ever five domes on the board, Chronos's player instantly wins the game.

The inclusion of the god power cards is optional, and changes the feel of the game slightly. Without those cards, there is no randomness in Santorini at all. With them, there may be some (depending on how players choose their cards), but even then, the randomness will have only a very minor effect on the game. If it weren't for the cards, I would have rated the Strategy of Santorini at 6, and the Randomness at 0.

I like this game. It's quick and easy, but with some depth and strategic complexity to it. In addition, the components are very pretty, and it's nice to see the game progress as more and more buildings get completed. The inclusion of optional asymmetrical powers adds a nice touch of customisation as well, allowing players who prefer a little less of a straight-up abstract strategy game to change things up just a smidgen.

Now, let's not forget the Six Characteristics of a Good Game:
It certainly does have all six of those characteristics, and in spades! Not bad at all!

So there you have it. My review of Santorini. If you haven't already played this game, I hope I have provided you enough information to decide if you want to give it a try! I will see you back here again next week, and until then, remember to