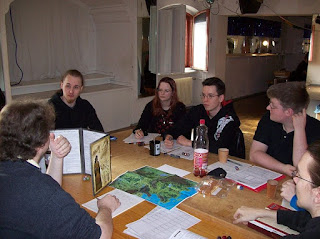 Remember in the last entry, I talked about finding a game that you want to run? I mentioned that you'd also have to match that game to your players. This can be very tricky. It also depends on where you are; certain cities have a broader range of gaming enthusiasts than others. If you're spoiled for choice, this won't be as big an issue for you.

However, sometimes you'll find that the only players you can find are invested in a certain game already, and aren't willing to try a new one. Don't despair! There are always options. For one thing, you might find people in different areas who are willing to play online, be it through email, forum posting, via a dedicated online gaming service like Roll20, or even via video chat like Google Hangouts.

My favourite way to trick people into playing find new players is to recruit people who've never played before. Sure, it can be a little more difficult, as they'll have to learn the basics of roleplaying at the same time as they learn a new system... but you won't have to overcome their investment in another system. There are lots of potential new players out there. Find people who play video games but have never tried tabletop RPGs. Encounter individuals into other geeky interests, like comics and nerdy films or TV shows. Join a medieval re-enactment group and ferret out those members who've never tried gaming. You might even get lucky with the local gaming club or board game cafe!

In the end, it may be that you just can't find people to play that aren't willing to play a game other than the one they already know. In this case, you must decide if you are willing to run a game in a different system than you had originally chosen, or if you just won't get to run a game at this time and place.


Fitting Players to Each Other

It is almost so obvious that it doesn't need to be said. And yet, I've known people who overlook this basic aspect of gaming. If your players don't get on with one another, they're not going to make for a very enjoyable gaming group. There are the cliches about players whose characters develop a rivalry so intense that the players themselves end up hating each other. These cliches exist for a reason. I've known people to whom it's happened.

Of course, there's really no way to guarantee that players who previously liked each other will grow to detest each other as a result of in-game events. There are ways to minimize this, some of which I will describe in upcoming entries. But it will always be a possibility.

The important thing is to ensure that the players can get along with each other, at least at the beginning. This may limit your pool of players, but a small group can sometimes be even more fun than a big one! And speaking of group size...

This depends a lot on personal taste. Personally, I won't GM for groups of more than six players; it gets to be too many people to keep track of (both at the table and in character). I also generally feel that three is too few players, unless you've got a solid group with a strong cohesive theme. But depending on what game you're playing, and what kind of story you want to tell, you can tweak these numbers as you see fit.


Fitting Players to You as GM

This point also seems like it's self-evident. But there's a possible problem beyond the danger of GMing for a player that you don't like (or that doesn't like you). That's the problem of GMing for the wrong player type.

Storyteller player types and Butt-Kicker player types (just as one example) often find themselves at odds, as one loves what the other hates. This problem is augmented when one of those people is the GM. A Storyteller GM will want interesting events leading to a thrilling climax with a satisfying denouement. This will irritate the Butt-Kicker for whom he's GMing, because that player just wants to kill monsters. Conversely, if the GM is a Butt-Kicker, the game may consist of nothing but meaningless combat that leaves the Storyteller player cold.

Of course, good GMs will recognise their own biases and work to provide in-game events that will satisfy all of their players. But if you have the option, it may be easiest for everyone involved if you try to select players who fit more closely with your own player type.

Sadly, all this hard work may be for naught if your players don't have compatible schedules. Often, players will have trouble finding a time that works for all of them. Even when they do find a time, events will sometimes interfere. People go on vacation, have special events, and have other 'real life' involvements that mean they have to miss a session or two.

In the end, it all boils down to balancing as many of the above concerns as possible. You may have to adjust your expectations in one area in order to make it possible to meet the needs of another area.

Just remember, in the end, it will all be worth it. A few months (or maybe even weeks) from now, you'll be able to look back on a great story that you've told with your friends with pride. You'll be able to remember this work of creativity that you've accomplished, and say, I did that. With a little help from my friends, I did that. So think about the rewards as you balance all the logistics. In the meantime, look out for my next entry in this series at some point in the future. Until then, remember to