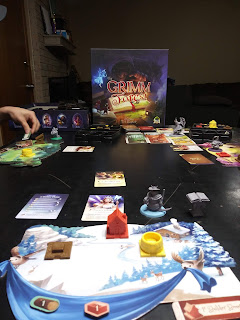 Most of these miniatures are completely superfluous. When we played, we often forget to move the miniatures around the table, mostly because it wasn't necessary to do so. They were placeholders, memory aids, guides to help with the timing involved in turn order. But we understood the mechanics so well, even on first playthrough, that the minis weren't really necessary.

I'm getting ahead of myself. Let's look at the ratings.


An Overview of The Grimm Forest 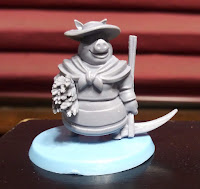 Players take on the roles of the relatives of three little pigs, from the fairy tale. They have decided to have a house building competition, with characters from other fairy tales watching and occasionally helping out. Each player has a play mat on which they organise their resources. On this mat, they keep their building materials (cardboard tokens representing wood, straw, and bricks) as well as the houses they're building. There are three levels to each house (floor, walls, and roof) in the three building materials. On the player mat in the foreground of the photo at the beginning of this article, you can see a wooden house that is so far only a floor, a straw house that has a floor and walls, and a brick house that has floor, walls, and a roof.

In addition to the player mats, there's a series of locations: the brickyard, the forest, the fields, and the market (the market is only used in a four-player game). Each of these receives a number of material tokens at the start of each turn (3 bricks in the brickyard, 4 wood in the forest, and 5 straw in the fields - the market, if present, gets one of each). These are added to any tokens that may be remaining from previous turns.

The players reveal cards simultaneously to indicate which location they want to go to. Ostensibly, you're supposed to put your miniatures on the location you've chosen, but we didn't mess with it, because it seemed to add an unnecessary extra step to the game.

Regardless, the resources on that location are distributed evenly amongst the players who are there. Players move these resources to their player mats.

Players then take turns using the resources they have to build their houses. It costs 2 of the appropriate resource to build a floor (two bricks for the floor of a brick house, for example), 4 of the needed resource to add walls to a floor, and six resources to finish a house off with a roof.

Alternately, instead of building, you may simply draw a single resource, or you may take a Fable Card.

Notice I mentioned Fable Cards above. These are cards that grant you special abilities. Players may play a single Fable Card along with their location card in the Gather Phase. If you do, that card has an effect. These effects can range from fairly simple (all players who have gone to the same location as you must choose a different location instead) to fairly complex (like the monster cards; when you play a monster card, you place the appropriate monster mini on one of the location cards, and that monster affects the location in some way. For example, the dragon causes all players at the same location as the dragon to discard all their resource tokens).

There are also Friend Cards; you normally gain a Friend Card when you build walls on one of your houses, but you can get them in other ways as well. Friend Cards grant you special abilities, like the Fairy Godmother card, which allows you to draw two Fable Cards as a special action during the Build Phase, and can be discarded to trade two Fable Cards for any two resource tokens.

Ending a Game of The Grimm Forest

Once a player has three complete houses, the game is over and that player is declared the winner. However, if two or more players finish three houses in the same round, the player with the sturdiest house wins (brick beats wood, and wood beats straw).

Final Thoughts on The Grimm Forest

I enjoyed this game far more than I thought I would. The game play was enjoyable, with some depth, and just the right amount of screwage to make it fun without being maddening. And so help me, the miniatures were just absolutely beautiful. Some of the monsters in particular were amazing: 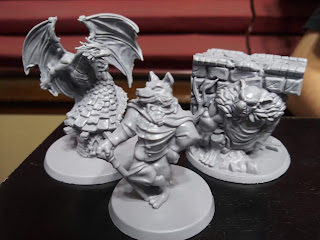 Of course, some people have already painted their minis. You can see a lot of really great work on the Board Game Geek images page. But even without painting, they're astoundingly lovely.

And let's not forget the six characteristics of a good game:
Another game with all six! Nicely done!

So the only thing we really need to ask is this: is the added expense of the stunning (but perhaps not entirely necessary) minis in this a point in favour of buying it? Or just a pretty thing to look at whilst playing the game that is a lot of fun even without the minis?

One other thing I will say about this game is that it is almost as good as Wasteland Express Delivery Service at packing a whole lot of components so very well into its box with very little wasted space.

So there's my review. I hope you have found it to be entertaining, or at least informative! So I will see you back here again some time in the future. Until then, remember to