Well, I took those ideas, and I ran with them. I spoke to the PFLAG leadership, and I co-ordinated with the owners of Loot & XP, and we hosted what we called the 'Trans Friendly Game Night.' The idea was to provide a welcoming space for a fun activity in an inclusive environment. The first session took place this past May.
There was a lot of attention on the event. The local university included an article about it in the student newspaper, and the event was shared by several local LGBTQ+ organisations. Many people expressed interest in it becoming a regular event. So I worked with Loot & XP and PFLAG to arrange another one in July, then again in August, and another one in September.

From the very beginning, I had to struggle to avoid becoming discouraged. A lot of people clicked on 'going' or 'interested' on the Facebook event page. Something like 55, or thereabouts. So when only 20 people showed up, I was a little disappointed. Sure, that's a pretty good turnout for a first-time event, but it's a lot less than I was expecting based on the guest list I was seeing.

And the numbers got lower each time. Finally, in September, only two people showed up. I felt like I was doing a lot of work for no reward. That discouragement, coupled with the lack of free time I was experiencing at my new job, left me with no motivation to continue doing the event. So I stopped.

Over the next few months, I heard that people were asking when the next one would be. I had to fight the urge to scream, 'There's not going to be a next one because you couldn't be bothered to show up for any of the ones that already happened!'

But recently, one of the co-owners of Loot & XP told me that he and a friend were going to go ahead and organise another Trans Friendly Game Night. They invited me to act as co-host on Facebook, mostly (I think) out of courtesy, but really, it's going to be all them this time. Which is fine with me; I'm not sure I am able to do much more at this time, either emotionally or in terms of time commitment.

But (and here we get to the point of this post) there was a comment made on the event page on Facebook saying that naming the event 'Trans Friendly Game Night' implied that other nights were not friendly to Trans people.

A lot of others argued that that was not the case. But the original commenter, and a friend of his, continued to insist that saying this one specific night was 'Trans Friendly' implied that other nights were not. As corollary, they pointed out that having a 'swingers night' at a club suggests that other nights at that club are antagonistic towards swingers.

My reaction to this is: first off, I have never met anyone that thinks 'swingers night' implies that other nights are not friendly to swingers. The English language, with its heavy reliance on context, connotation, implication, nuance, and subtle shades of meaning, doesn't work that way. Saying 'swingers night' means, to almost everyone who speaks English fluently, that this particular night is focused on a specific group that does not normally get the spotlight. It doesn't mean that it's the only night that that group is welcome. And the same thing is true with Trans Friendly Game Night.

Trans people are always welcome at Loot & XP. The owners and staff are very friendly (some of the staff are LGBTQ+). Heck, they even have those 'whatever' signs on the doors of their gender-free bathrooms: 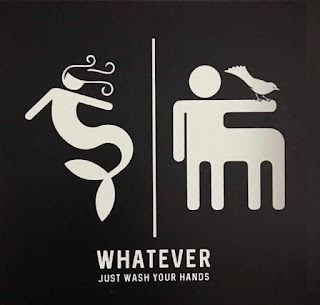 Look, I know that wording can matter. I am aware of how poorly chosen words can cause actual mental trauma for some people. But I also think that languages in general, and English in particular, cannot be precise logical systems. There will always be some fuzziness in the grammar and vocabulary. Getting upset over something that very clearly will not be interpreted in a way that you think it might is not going to help anybody.

And more to the point, this brings me to my second issue: why are we fighting with our allies? There are plenty of people who believe that trans people (and others under the LGBTQ+ umbrella) shouldn't exist, and some of them would advocate for killing such people. Why then are we getting angry at those people who are trying to be supportive?

This all ultimately goes back to the byline for this blog: Everyone is welcome at the gaming table. And when I see divisive behaviour like this, it upsets me. Here we have people trying to be inclusive, supportive, and decent. And along comes someone who (pretty obviously, in my opinion) has no interest in bringing people together, but only wants to stir up trouble.

Anyway. It was bothering me, and I needed somewhere to express my frustration. Hopefully, if you've read this whole thing, it's given you some ideas as to how to proceed in terms of inclusiveness in the future. Because remember, we're all in this together, and we shouldn't be fighting with our allies. Save that for our enemies.