We continue our reposting of my PinkFae articles with this item, which was originally posted on 9 January, 2016. 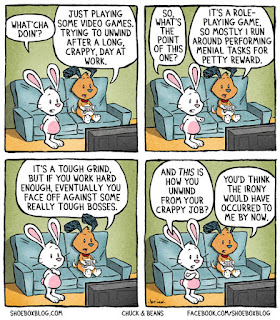 Why do we play games? Sure, we all have our reasons. For some, it's about spending time with people they love. Other people see it as an exercise in creativity, or practising various mental skills (or, let's be honest, physical skills; not all games are played around a table or in front of a television set).

For me, there are many reasons: some games are enjoyable because they indulge a particular love I have (dare I say, a fetish?), such as the original Balderdash, which caters to my lexophilia. Other games force me to think, and I love to give my brain some exercise on occasion; Dominant Species and Clans are two excellent examples of these types of games. Some games are fun for me because they facilitate social interaction that I otherwise find difficult to attain (The Resistance: Avalon falls in this category). Others appeal to my love of a certain fandom, such as Star Trek: Road Trip or Firefly: The Game). As a Storyteller, I also tend to be drawn to games that facilitate the telling of stories (thus my love of tabletop roleplaying games like Changeling: the Dreaming, as well as Fiasco and Gloom).
Not everyone plays for these same reasons. As mentioned in my last post on Lawsian Gamer Types, different people have different emotional drives. That's fine, as long as we can allow our overlapping interests to synergise. We don't have to like a game for the same reason, as long as we can all enjoy playing it together.

I was thinking about this last night as I was reading the rules to my new microgame, North, South, East, Quest. Although it describes exactly what conditions constitute a 'win' and what constitutes a 'loss,' the game is very much about telling a story. How is this terribly different from telling a story in a non-game situation?

I am employed as a teacher. I spend all day working with young humans, trying to convince them that the things we're doing in class are important. It can be difficult, and frustrating, and many days, I will come home exhausted. But what do I do then? Sometimes, I sit down at a table surrounded by humans (usually not as young, but not always much older) and engage in mental activities that can be difficult and frustrating.

Last night, for example, I played a game called Kingdom Builder. In essence, you are placing houses on the board; you want to place those houses in some very diverse locations to try and meet certain victory conditions, but you're required to place houses adjacent to the ones you've already placed, unless there are no legal positions where such houses may be placed; only then are you allowed to put a house in a new location that may expand your ability to work towards victory points. It was my first time playing that particular game, so I was making many mistakes. It wasn't until the game had ended, and I was very firmly in last place, that I realised how the strategy of the game worked, and what I should have been doing all along.

It was somewhat frustrating. It was very difficult. And yet this is what I do for fun.

Sure, it was my first time playing, and I was still working on learning the essentials of the game. But it won't be any less frustrating or difficult the next time around; I'll simply have more knowledge and experience on which to draw.

Maybe I'm lucky. As the singer Marc Anthony said, 'Do what you love, and you'll never work a day in your life.' Sure, it's exhausting having these battles of will every day with students who don't care, don't want to be here, don't understand why school is important, and would much rather be at home playing video games. Sure, the political and legal issues surrounding education (especially in my current home state) are frustrating, and the administration and paperwork and all that other hoopla is tiring and annoying (a friend of mine once said, 'You love teaching. It's all the things that keep you from teaching that you hate'). But every time I take the metaphorical step back and think for the slightest moment about what I'm doing with my life, I realise how much I wouldn't want to give it up for anything else. I feel like I'm making a difference. Maybe only in a small way; maybe only for a handful of the students I teach; maybe in only a limited area (geographically, temporally, subject-matter-wise, etc); but I am making a difference. That's all the reason I need.

As mentioned before, I love to think. An ex-girlfriend once told me that I think too much. I don't think it's possible to think too much. It's only through the power of intellectual capacity that humans are able to overcome the problems facing them. So getting to exercise that thinking ability is a wonderful thing. I guess that's another way in which I'm very lucky; I actually enjoy thinking. I love being confronted with games where I have to make decisions along the lines of, 'Do I take this action, which will benefit me greatly, or do I take this other action, which won't benefit me much, but will block my opponent from taking an action that will benefit him? Or I could take this action here, which won't benefit me now, but will benefit me in the long run, unless my opponent chooses to block me on his next turn, which will inhibit his ability to win in exchange for preventing me from winning?' Maybe strange reasons to enjoy a game, but valid reasons nonetheless.

Perhaps it is a little ironic that, in our entertainment, we spend so much time and energy doing things that, were we getting paid to do them, we would find abhorrent.

Anyway. That was what I was thinking about today. I'm not really sure what the point was in all of that, but to paraphrase Futurama: You read it! You can't unread it! So I will leave you with that for now. Until next week,