I've been able to play Blood Rage twice now, and I enjoyed it both times, so the time has come for me to write a review of it. Guess what? We start with the ratings. 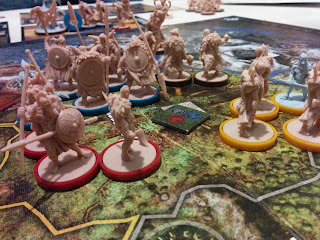 An Overview of Blood Rage


Each player controls a 'Viking' clan (of course, these are the stereotypical Vikings with horned helmets, comically oversized axes, and far too much fur). Over the course of the game, which takes place in three rounds called 'Ages,' they must invade and pillage an island representing the Nine Worlds. The winner will be the player whose clan is able to gain the most glory points by winning battles, completing quests, pillaging villages, or using the Gods' Gifts to their advantage.

Each player starts with eight warriors, one ship, and one leader. In the course of the game, they can recruit up to two 'monsters,' which include everything from dwarves and dark elves to frost giants. Yes, I know it sounds like a romp through the D&D Monster Manual, but these are actually creatures from Norse mythology. Especially when you add in beings like Valkyries.

At the start of your turn, you have all of your characters in your supply, and each player receives six cards (called 'Gods' Gifts') through a pick-and-pass mechanism to make up your hand. The bulk of each round is taken up with the Action phase, in which players may Invade, March, Quest, Upgrade, or Pillage. Then players discard all but one of their remaining cards before gaining Glory Points for their completed Quests. The next step is to destroy one of the provinces on the board as Ragnarok continues to ravage the world, before the final phase of the round: Release from Valhalla, in which all dead characters return to their owner's supply.

At the end of the Third Age, players calculate their final Glory Point total, and the player with the most is declared the winner.

Most of the game takes place in the action phase, so that's where I'll concentrate my descriptions. However, in order for that to make sense, I need to describe the board and the player mats.

The game board represents an island divided into nine provinces. Eight of these provinces are arranged in a circle around the edge of the island, with the ninth province, Yggdrasil, landlocked in the centre. The eight outer provinces are grouped into three Regions. There are also four fjords, areas of the ocean which may contain your ships, which are marked out as being adjacent to two of the coastal provinces. Each province except Yggdrasil has between three and five villages, and no province may contain more characters than it has villages (Yggdrasil, which has no villages, can contain any number of characters).

Each player mat has several areas:
Player mats also have an overview of the actions available to you in each Action Phase.

Players with no Rage points remaining may still join combat if another player takes a Pillage action, however. And that brings us to the final point of description of this game:

When a player declares that he intends to pillage a province, all other players are given a chance to attempt to prevent this action from being successful Here's how it works:
Battles can sometimes be huge and bloody, especially in Yggdrasil, where there is a sizeable pillage bonus and no limit on the number of characters that can occupy the province. But sometimes, they can be tiny as well. I've seen plenty of battles between two one-point warriors.

For my taste, I'm a little disappointed that this game plays into the stereotypical view of Vikings as savage barbarians with horns on their helmets, bare chests, and fur on their shoulders. Having lived for several years in a city that was once a stronghold of Viking civilization, a city that is proud of its heritage, and is familiar with the more subtle and nuanced reality of Vikings not only as pillagers, but also as skilled traders, explorers, and craftsmen, I have a tendency to balk at non-historical depictions of the Norsemen.

That said, I must admit that the game is very well designed, aesthetically speaking. The miniatures are well crafted, the artwork is lavish and tonally appropriate, and all the pieces have a satisfying tactile component. The pieces are nice to hold, nice to look at, nice to feel and manipulate. My one complaint is that all the miniatures are plain beige or blue-grey, but given the number of them, it would likely be prohibitively expensive if they were pre-painted. Not surprisingly, many people have posted photos on Board Game Geek of their own custom-painted miniatures, which they have lovingly painted themselves.

As for the game itself? Well, in looking at the entry I wrote recently on what makes a game good, I'd say it definitely fulfills at least five of the six requirements I listed. There is no player elimination, it's fun to lose, it has plenty of player agency, it ends decisively, and it allows for upsets. The last one, 'Relatively simple,' is arguable. I feel that once you've played it once, it all makes sense, and it's very easy to remember the rules in future games. However, for your first game, some of the subtle complexities may take some getting used to. So you can argue this point either way.

Still, I enjoyed the game quite a lot. It turned out to have a lot more depth than I was expecting. In my experience, many games of this type usually emphasise direct conflict; especially with a name like Blood Rage, I was expecting victory to be entirely (or almost entirely) dependent on dominance through combat. However, early on in my first game, I discovered that there are many cards which allow you to gain Glory points by being defeated in combat. For the rest of the game, I greedily hoarded all such cards and intentionally initiated combats (or joined existing ones) that I had no intention of winning. I was firmly in the lead until the very end of the game, and the only reason I didn't win is because John recognised my strategy and took a card that I needed, preventing me from gaining Glory points from the death of my characters. Had he let me acquire that card, I would have won the game through the shrewd tactic of getting my ass kicked.

Any game in which losing combat is a viable path to victory is a worthwhile game, in my opinion.

In my second game, I decided to be more aggressive, trying to win through strength and dominance in combat. I didn't win, but I did much better than I normally do with that strategy. I tend to fail miserably when I attempt to use a fighty approach. Which, in my opinion, is a testament to the accessibility and flexibility of this game.

But, as I always say, that's just my opinion. By all means, examine my ratings above, read my description, and decide for yourself if this is your sort of game. In the meantime, have fun playing games, and whatever you do, never forget to