As I mentioned previously, the PinkFae site is essentially defunct. This makes me very sad, not just because it was a pretty neat site that had the potential to offer a lot in the way of a gaming blog, but because it had about a year worth of articles that I had written. I was quite proud of and pleased with those articles, and it would be a shame if they just vanished.

So starting today, I'm going to intersperse my normal articles with reprints of the ones I wrote for PinkFae. We start, today, with an article entitled 'Lawsian Gamer Types,' which was originally published on 3 Januay 2016. 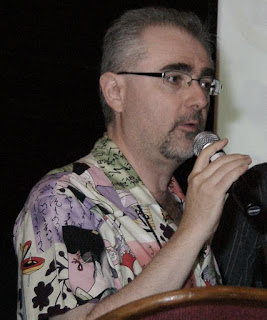 Robin Laws, an experienced author of roleplaying books, has written an invaluable tool for GMs. It's invaluable for all gamers, although it was targeted at the GM. In it, he includes a great deal of advice on how to make your games as enjoyable as possible for all participants. It's not the stuff you'd normally find in the 'For the Game Master' section of the core rulebook or supplements like the Dungeons Master's Guide. It's more fundamental information, such as campaign design (are you running a dungeon crawl, a set-piece story, a branching story, an episodic story, etc?), suggestions on how to be spontaneous (have a list of appropriate names for when you need to ad-lib an NPC, have a box of index cards with stats for random NPCs that the players may encounter, etc), how to deal with different player types (what emotional kick is each player looking to get from the game, and how can you deliver it to them?).

One of the most important issues that he addresses in this book is the topic of Gamer Types.

This was a watershed moment for me, when I read that section. Suddenly, all the frustration and conflict I'd felt regarding the other members of my gaming group was made comprehensible! No wonder I wasn't enjoying games with them as much as I thought I should be... I was a different gamer type!


In reading these descriptions, I realised that I was most definitely a Storyteller with a hint of Method Actor (I'd say I'm about 60%-40%; I will usually work to further the story, but I've been known to prioritise my character's personality over plot on occasion).

This was a problem, because the vast majority of people that I play with tended to be either Butt Kickers or Power Gamers. Every time I got frustrated with my fellow gamers for ignoring the needs of the story in favour of looking for more enemies to kill, it wasn't because they were gaming wrong. It was because they wanted a different sort of emotional hook than I wanted.

This led to an interesting game in which I, angered by the groups choosing to follow the most mindless war spirit as the pack totem, tried to create the most unenjoyable combat-monster I could; I gave him the lowest possible scores in every attribute and skill that didn't directly contribute to combat, and maxed out those that did.

It backfired. Everyone loved the character. One of the players even used him as an NPC in subsequent games.

But that's something to think about: when you're preparing a game, are you considering the player types of those people who are going to be playing? Chances are, many people don't even think about these things.

Maybe a good idea to think about for next time.

And speaking of next time, I will see you again here at some point in the near future. Until then,