Board Game Review: On Tour 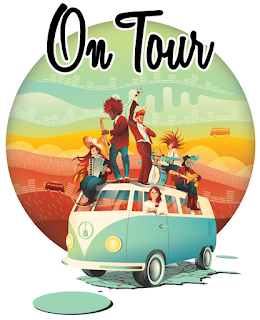 Sometimes you find a game that surprises you with its depth. What appears to be a simple fluffy game with no appeal turns out to contain some hefty decisions and require intense thought. On Tour, by Chad DeShon and published by Board Game Tables Dot Com, was one of those games. When I first saw it, I was unimpressed with the theme, and didn't think much of it. But when I actually sat down to play it, I was shocked at how much fun it is.

Sure, it's not going to be a serious game for a heavy Friday night game session with the hardcore gamers. But as a party game, or a light filler, it is unexpectedly satisfying! I might not have ordered a copy for myself, but I received a voucher for a discount, and felt it was worth having at that price.

So let's take a look at this game, starting with the numbers:


An Overview of On Tour 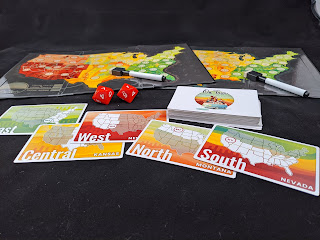 Each player is the manager of a band booking locations for their concert tour. You want to maximise the number of cities you visit on the tour. Each player has a map of the continental USA. There's a spot to write your fictional band's name, and the map is divided into three vertical regions (East, Central, and West) and two horizontal regions (North and South).

On a your turn, you roll the included 2d10. This provides you with two numbers, reading the dice as d% in both directions. Thus, for example, if you roll a 2 and an 8, then your numbers are 28 and 82. Also, you draw and lay out three cards. Each card lists a state (a few of the smaller states are combined; for example instead of Maine or Vermont, all of those states are combined into 'New England,' likewise, New Jersey and Delaware are part of 'Mid Coastal'), and one of the regions in which that state is located (since all states are in one of the game's vertical regions as well as one of the horizontal regions. Thus, Florida is located both in the South region and the East region). Each card only lists one of the two regions.

Then, all players write these two numbers on their maps. Each number goes into a state that does not yet have a number written in it. The number must go in a state in one of the regions listed on the three available cards. You cannot use a card twice. So if there was a card for North and two cards for South, you could put one of the numbers in a state in the North region, but the other number must go in the South, as there's only one card available for the North region and cannot be used for both of your numbers.

If you put your number in the actual state that is listed on the card, you circle the number, indicating that it will be worth bonus points at the end of the game. In other words, if you have a card for Minnesota labelled as North, you can use that card to put a number in any state in the North region, but if you use that card to put a number in Minnesota specifically, the number is circled and worth a bonus point.

All players use the same three cards, but are putting their numbers on their own map, so that each player's map will be numbered differently by the end of the game. Then the next player rolls the dice and draws three new cards, and all players put these two new numbers on their maps as allowed by the new cards.

Rolling doubles gives you a wild; you may place a star according to the normal placement rules, which counts as any number. If you have no legal place to place a number, you must cross out one of your remaining states.

The game ends when all states have numbers. Players then connect states to form the longest route possible. When drawing a line from one state to another, you must always move to a larger number. This means that you start at the lowest number you can and travel to the highest number possible. See the following photograph for an example: 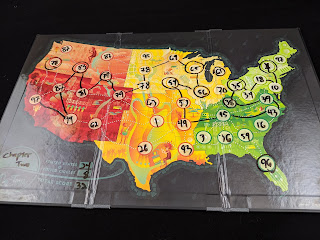 In this map, the player started at the wild card star in New York, then moved to the 10 in Mid Coastal, then the 18 in Pennsylvania, the 34 in West Virginia, and so on, zigzagging across the nation until arriving at the 97 in California.

Players get one point for each state visited on the tour (in this example, 24), plus a bonus point for each circled number on the route (in this case, 8). The player with the highest score is declared the winner.

Final Thoughts on On Tour

Like I said, I was surprised at the depth of this game. It starts off pretty easy, picking semi-random places to put numbers (of course, starting off with the idea that higher numbers should go on one coast, lower numbers on the other coast, and mid-level numbers in the middle). But once the map starts to fill up, it gets harder and harder to decide where to put the numbers that have been rolled within the limits placed upon you by the available cards.

But that's the fun of the game! Making those decisions, lamenting your earlier decisions, trying to work out where to place your current numbers so as to not completely hose yourself... and then working out the best route at the end of the game once all your numbers have been placed.

What about the six characteristics of a good game? Let's see...
Five out of six is not bad. And I wouldn't worry about the 'it allows for upsets' part too much, because that's only a result of not knowing how many points anyone has until the very end. You can sort of get a feel for where a player's route is going to be, but until you roll the dice, you won't know for sure if you get the numbers you need to be successful. So I wouldn't count that one against this game as much as I would in other cases.

As I mentioned before, I was surprised at how much fun I had playing this game. At least enough to buy it at a discounted price!

The base game comes with four boards, but you can buy up to eight more (I suppose you could buy more than eight, but the box is designed to hold twelve at a maximum) if you want to be able to play with more people. I bought four additional, as I felt the main purpose of this game in my collection would be as a party game, and I wanted it to be able to accommodate a larger than normal number of players.

But that's my review of On Tour! I hope you found it helpful, and that it will allow you to better decide if you want to try it for yourself. So until next week, enjoy your touring and have fun playing games! And of course, don't forget to

Email ThisBlogThis!Share to TwitterShare to FacebookShare to Pinterest
Labels: board game, On Tour, photos, review