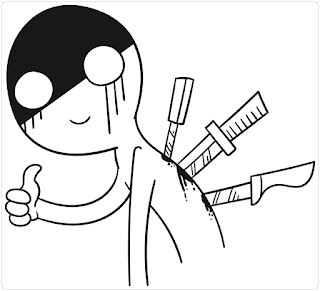 My gaming group often refers to the 'take that' mechanic as screwage. As in, 'Ah, you totally screwed me with that move!'


The Amount of Screwage in a Game

Whatever you call it, there is a sliding scale of how much screwage a game contains. In our circle, we often like games that have some level of screwage, but not too much. One such game that we all like a great deal is The Grimm Forest. The first half of each round involves players secretly choosing and simultaneously revealing whether they want to gather resources from the fields, the woods, or the brickyard. Ideally, you'll be the only one gathering at your chosen location, which means that you get all the resources at that location. If more than one player goes to a location, the resources at that location are distributed equally between all player present. Thus, you can subtly 'screw' other players by intentionally going to the same location to reduce the amount of resources that player receives. Additionally, there are 'Fable cards' and 'Friend Cards.' Fable cards are played at the beginning of the gather phase, and often have some detrimental effect on other players. Friend cards are kept on the table in front of you to give you some benefit, but when you receive a new Friend card, you must discard the one you currently have. However, when you draw a new Friend card, you are allowed to give it to another player instead of keeping it for yourself. Thus, if you get a card you don't want and an opponent has a Friend card that you don't want them to have, you can give your newly-drawn Friend card to that opponent to replace the one they currently have.

This is a good amount of screwage for our group. It's subtle and it doesn't completely ruin another player's chances of winning, but it does stymie that player just enough to keep things interesting. The effects are just detrimental enough to be mildly annoying, but is counterbalanced by the fact that it's not normally likely to prevent you from reaching victory as well as the fact that you're very likely to return an equal amount of screwage to the other players in very short order.

We like games with no screwage as well. Swordcrafters, at least in its base form, is all about making strategic moves that will benefit you, and though you might try to take actions that will deny valuable pieces to other players, actions directly intended to be harmful to those other players are generally not possible. Purely strategic games, such as Blokus, Hive, or the basic mode of Santorini are also good examples of games with no screwage.

We have found that, in our gaming group, there's a delicate balance to be maintained. Certain games can be enhanced by an appropriate amount of 'take that' mechanics, but too much can ruin a game. Certain games, like the aforementioned Munchkin, which are almost entirely based on screwage, are not enjoyable for our group. We know some people who like these sorts of games, but generally don't play with them, as their tastes don't really align with ours.

Of course, this is not to say there's anything wrong with 'take that' mechanics. It is, as with all things, a matter of personal taste and preference. I have no problem with people who like games that are purely screwage. I just don't like playing those types of games, so if I'm going to play games with people who do like such games, we'll need to find another type of game that I can enjoy.

There are a lot of games out there with varying levels of screwage. Finding the level that works for you is instrumental in discovering what games you enjoy. Of course, the concept of 'take that' mechanics can be viewed either as a scale-able description (for example, 'On a scale of 1 to 10, Jórvík is about a level 5 on screwage') or as a mechanic (that is, 'Exploding Kittens uses a "take that" mechanic'). Knowing how you're referring to a game and using the terms correctly in that context is essential.

So go forth, find the games that have the right level of screwage for you, and enjoy betraying your friends. I will see you here again next week, and until then, remember to