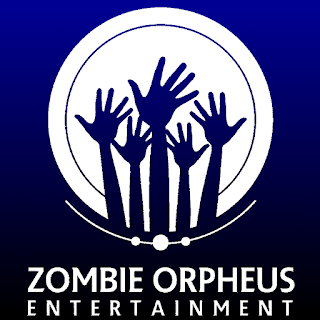 
Before we hear about their projects


Here's a little background on ZOE. Back around the turn of the century, a group of friends from Washington released a couple of low-budget indie horror films called Demon Hunters. They later formed a company called Dead Gentlemen Productions, and subsequently created a humorous short film called The Gamers. This film was wildly popular, so they made a sequel: The Gamers 2: Dorkness Rising. Despite the popularity of the sequel, the company had issues with distribution, and most of the members decided to take a hiatus to deal with feelings of burnout.

But one of the members from Dead Gentlemen decided to keep working on films. So, with a new vision of how the company should be run, he formed Zombie Orpheus Entertainment. A big part of his vision was to make ZOE a fan-driven venture. He hoped that this would help alleviate the issues they'd had that caused burnout for Dead Gentlemen.

A few years later, Dead Gentlemen came back to life. Although the two companies are separate, many people work for both companies. The two work closely together on many projects. As such, it can be very difficult to tell the difference between the two any more. But they are still two different companies.


My Introduction to ZOE

I first heard of ZOE when I learned of the Dark Dungeons film. For those who don't know: a man named Jack Chick founded Chick Tracts. This company creates and distributes religious leaflets in the form of small comic books. These tracts are often laughable in their subject matter and presentation. They deal with a variety of topics. But one of the most famous (or perhaps 'infamous' is a better description) is 'Dark Dungeons.'

This leaflet tells the story of Debbie, a young girl who plays Dungeons and Dragons I mean Dark Dungeons. In the course of the story, Debbie joins a coven of witches as a result of playing. Her best friend Marcie later commits suicide. Then Debbie meets a nice young man who convinces her that the only way to fix her 'messed up life' is to become a christian. So Debbie burns all of her books and miniatures, and lives happily ever after.

This specific tract is one of the worst examples of people who demonise gaming without understanding it. A few examples: in the tract, when a character dies (without allowing the player a chance to prevent that death, no less), the player is banished from the group. Instead of, you know, letting her make a new character. Players of the fictional Dark Dungeons game are all members of a cult, or are being groomed to join that cult. The character of Marcie is so distraught at her character's death that she kills herself. And the drawing of demonic spirits fleeing the books and other gaming paraphernalia as they're burning is just priceless.

The tract is so laughably bad that I spent some time collecting parodies. There are a lot of good ones out there, but perhaps my favourite is the MST3K-style parody. So, being the fan of this tract that I am (tongue firmly planted in cheek), when I heard that someone was making a movie out of it, I was super excited. I ordered the DVD straightaway. This image shows my reaction the day it arrived in my postbox:

It was a great film. You should watch it. It's only forty minutes long, so it won't take long.

Both ZOE and Dead Gentlemen have a lot more short films now. Many of them are further sequels to The Gamers series, and ZOE is currently running a Patreon campaign to create a monthly series in that line. If you haven't seen any of The Gamers films, each installment focuses on a gaming group. A GM and his players sit around a table playing D&D, and the film cuts to the characters being played (who are portrayed by the same actors as those playing the parts of the players at the gaming table). Thus, you get to see both sides of the story: the gamers at the table with their dice, and the characters in the world of D&D.

The thing that really made me want to write an article about ZOE, though, was that when I stopped to talk to them, they were very enthusiastic about inclusion. Even as far back as the first sequel, one of the gamers was playing a female character. In the cutaway scenes, showing the characters in the fantasy world, either a male or a female actor would portray the female character, depending on whether the player remembered that his character was female at that time.

But the nice person to whom I spoke stressed that there were LGBTQ+ characters in the other series. She mentioned that one upcoming film contained a trans character. Sadly, because this was the second booth I visited at Gen Con, I was still a little overwhelmed, and didn't think to write down any of this information. As such, I've forgotten the details.

But I can tell you that everything I've seen (both from ZOE and from Dead Gentlemen) has been high quality. So I don't think it would be too arduous a task to watch all their films to find out which ones contain these characters. If anyone finds out where these characters can be found, please let me know!

Anyway, ZOE is a quality company, and I highly recommend checking them out. I know I need to catch the films I've missed. So I plan to get right on that! Until next time,