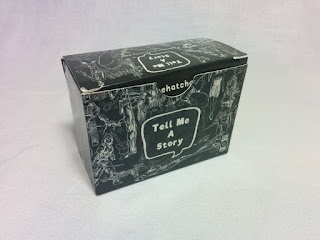 You may notice that I have formalised the additional Gamer Profile ratings mentioned in my last review into my new system. So let's see what this game has for us:


An Overview of Tell Me a Story

This is a game in which players tell stories. Surprise, surprise, I know. Here's how it works: the box contains (apart from the rules) five types of cards. There are the red Conflict cards, which have a source of tension. Green cards are Settings. Blue cards have Characters, whilst purple cards are Advantages, and yellow cards are Curses. In addition, there is a single black card, labelled simply, 'Judge.' Each player starts with three each of the Character, Advantage, and Curse cards. Let's see some examples of these cards: 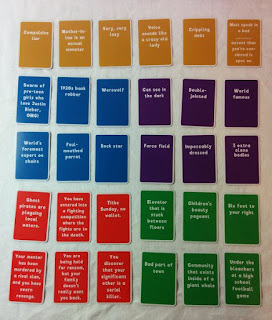 
How the Cards Work

The Judge will draw the top Setting Card. He or she then draws three Conflict cards, and chooses one. He or she reveals these to the other players. The other players then take turns telling stories about the chosen Conflict in the revealed Setting. On his or her turn, a player chooses one Character card and one Advantage card. His or her story is about that character with that advantage in that setting with that conflict.

After the current player has finished his or her story, the next player chooses a Character and an Advantage, and tells a story about that character with that advantage in the same Setting with the same Conflict.

After each player has told a story in the current Setting and Conflict, the Judge decides which he or she liked best. That player gets a point. Everyone draws back up to three Character and three Advantage cards (but not Curse cards). The Judge card passes to the left, and the new Judge draws a new setting and three new Conflicts. Game play continues in this manner. After each player has served as Judge, then you draw back up to three Curse cards.

The first player to have as many points as there are players (e.g., four points in a four-player game) is declared the winner.


More Depth about Tell Me a Story

This is one of those games in which you don't play to win. You play to hear the amazing stories that you and your friends tell. These stories can be funny, exciting, sad, or anything else. The first story I told in my game was so popular that I decided to write it up as a short story. It's called 'Wilma,' and it was based on the following cards:

The stories got more outrageous as the game went on. Some highlights included:


And some of the awesomeness came not from the stories themselves, but from how they were told. Like when I played a curse card that required a player to sing her story.


Final Thoughts on Tell Me a Story

Tell Me a Story is, like many games that I enjoy playing, best played with just the right group of players. I've tried to play storytelling games (like Gloom or Fiasco) with people who aren't very good at telling stories. Not only do these non-storytelling players not enjoy the game, but they also make it less enjoyable for me and others who are good at telling stories.

This means that I won't get to play Tell Me a Story very often, which is a shame. But with the right people, in the right setting, this game can be lightning in a bottle. We all had a ridiculous amount of fun, and one player in particular kept chanting 'This is the best game ever' throughout the evening. So if you're the kind of player who likes stories and storytelling games, Tell Me a Story is probably for you.

So that's enough for now. Don't forget to come back next week, when I talk about Zombie Orpheus Entertainment! Until then, tell more stories, and