This week's entry is another PinkFae archive. The article is another entry in my series that I wrote on Gen Con 49 in 2016. It was a fascinating look at an interesting phenomenon in the geek community: crossplay and gender bending cosplay. It was originally published on 27 August 2016. 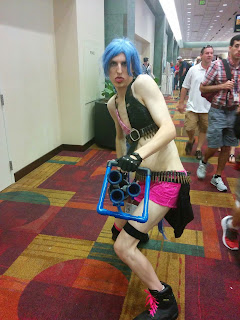 Gender identity is a hot topic at the moment. With issues like the current assault on the rights of transgender individuals in Texas, the nature of gender is at the forefront of socio-political discourse at the moment. This points to a current major trend in modern culture, with gender at the centre of that trend. Many people still firmly believe that sex and gender are binaries, and equivalent binaries at that. However, others realise that sex and gender are spectra which do not always correspond to one another. One of the more fascinating phenomena resulting from this is the concept of crossplay.

Perhaps you have heard of crossplay before. It is the act of cosplay in which the person dresses as a character of a different gender. The photo above shows an example; a male has dressed as a female character. In contrast, gender bending is when the cosplayer alters the character's gender to match that of his/her/their own. An example is seen in the photo below, showing a female cosplayer who has made a 'female Mario' outfit for herself.

Of course, the line between the two is fine and indistinct. It can sometimes be difficult to tell if the person is doing crossplay or gender bending. But given that gender is often an indistinct entity in itself, this seems only fitting. 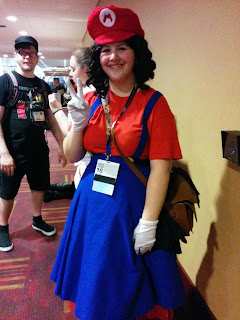 There are many reasons that people would choose to crossplay or to gender bend. Sometimes, it's because the cosplayer really likes a specific character that happens to be of a different gender, but isn't willing to let that stop him/her/them from dressing as that character. I overhead one male talking to his friends at Gen Con. He was describing a conversation he had had with his friends in which he told those friends that he was planning to cosplay as his favourite superhero: Sailor Jupiter. So he did exactly that: he dressed as Sailor Jupiter.

Others may crossplay in support of their friends or family. One example is the father who dressed as Leia for Halloween in support of his daughter who wanted to dress as Han Solo.

Still others may do so as a sort of social commentary. I myself dressed as Rosie the Riveter for Halloween last year, partly as an expression of my feminism and support for LGBTQ+ rights.


Intersection of Cosplay and Socio-political Issues 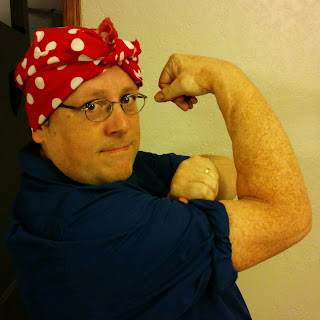 In Neil Gaiman's Sandman comics, there was a storyline called 'A Game of You.' One of the main characters in this story was a transgender woman named Wanda. In the resolution of the story, we meet Wanda's family, who refuse to accept that Wanda had chosen a different identity for herself. At one point, Wanda's aunt says, 'God gives you a body, it's your duty to do well by it. He makes you a boy, you dress in blue. He makes you a girl, you dress in pink. You mustn't go trying to change things.'

I will avoid pointing out the obvious hypocrisies in such a statement. I will simply say that more and more, people are realising that things aren't that simple. That there's a whole world of possibilities to explore. That we, as humans, have the ability to choose the course of our own identity and our own destiny. What better way of expressing who and what we are than by throwing off cultural expectations and dressing as a different gender for a while?

In some ways, geeks (like we gamers, be it video gamers, board gamers, or roleplayers) have it easier. We have an excuse to dress up in outlandish clothing. Pushing the boundaries of gender identity is just one more absurdity on top of a mountain of absurdities. When someone goes to a convention dressed as a video game character, or a character from a movie or TV series, there's already a level of absurdity going on. Especially when you have outlandish cosplay like this one of a mutated William Burkin from Resident Evil. We're already doing something kind of strange. Why would we feel the need to limit ourselves by gender when doing something so awesomely bizarre?

Still, it's kind of sad that we need the excuse of 'I'm going to a convention' to wear unusual clothing. Wouldn't it be better if we could all follow Portland, Oregon's example and just be weird all the time?


A special note on Ghostbusters 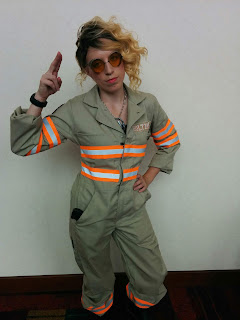 In the past, the Ghostbusters film was a popular source of crossplay. I saw many examples of females dressing as Venkman, Spengler, Stantz, and Zeddemore. But now, with a reboot film with all four lead roles recast as females, there's an even more exciting opportunity! So females can cosplay as Ghostbusters, or they can crossplay as Ghostbusters! And males now have that opportunity as well! I, for one, am very excited about this possibility.

I do wish we lived in a more accepting society. I wish that we didn't feel the need to make petty distinctions based on gender. I wish that people could be free to dress and act however they want. I wish there were no societal customs dictating what was 'right' or 'acceptable.' I wish that other subsets of culture were more open and accepting of new ideas as the geek subculture can be. And I wish that even within the geek subculture, we didn't need to use the excuse of going to a convention to exercise that expanded freedom.

But still, we're making steps in the right direction, and that's a good thing. So here's to crossplay and gender bending, long may it be a thing!

I'd like to say a special word of thanks to the wonderful cosplayers, crossplayers, and gender benders at Gen Con who graciously posed for photos to be used in this article. And even those who I wasn't able to photograph, I respect and admire your willingness and ability to step outside of normal gender roles, if only for a brief time. Thanks to all of you for being awesome!

Stay tuned! Next week is my first Gen Con board game review as I continue my series of articles from that convention! Until then, have fun and remember how awesome we can be! As always, remember to