Every Friday, I head over to my friend Zeb's house to play games with him, John, and (if I'm lucky) Zeb's wife Jenna. A few weeks ago, as we were sitting around the table deciding what we wanted to play that night, I asked about a game that was on the table near John. It was called Antidote. John was amazed that he had never played that game with me, and so they immediately set out to teach me how to play. Now I shall review it for you. 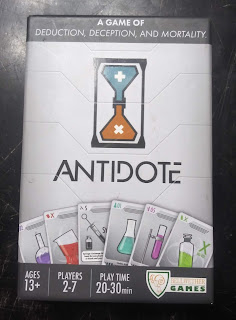 It was an interesting game, in large part because a kindergartener and a first grader ended up playing with us. The suggested ages on the box say 13+, but a six- and a seven-year-old were able to grasp the basics of play and do reasonably well.

Anyway. Enough of that. Let's get on with it!

An Overview of Antidote

In Antidote, players are working in a laboratory when they are suddenly exposed to a toxic substance, but they don't know which of the various chemicals in the lab is the one to which they've been exposed. Each player knows one or two of the chemicals to which they haven't been exposed, so they need to find out what the other players know so that they can, by process of elimination, take the right antidote in time to survive. But you want to try to give away as little information as you can, because apparently, this is a very cutthroat lab where the scientists all want each other to die!

The game is set up by shuffling the X cards together. One of these X cards is randomly chosen and placed in the box without anyone seeing which colour it is. The rest are sorted into piles with the syringe cards, and the number cards are dealt evenly onto these piles. Each player gets a pile. In this way, each player has at least one X card, and those with fewer X cards get a syringe card to make it up. Thus, your hand may look something like this: 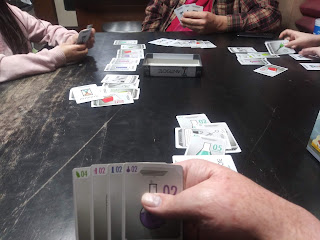 That photo was taken halfway through the game, so many of the cards that were in the player's hand have been discarded.

Here's how it works: on your turn, you may declare one of four actions:
In this way, you slowly gain more information from other players, either because you receive cards from those players, or because you see which cards they are discarding. Ultimately, the game ends when each player has only a single card remaining in their hand, because all others have been discarded. Once this is the case, reveal the X card that was placed in the box during setup. Each player whose remaining card is the same colour as the revealed X cards receives a number of points equal to the value of that card (for example, if the orange X card is revealed and the one card I have left in my hand is an orange 5, then I receive 5 points). Players with the wrong colour card did not correctly deduce the toxin to which they were exposed, and die (that is, they lose a number of points equal to the value of their last card). Cards with no numerical value (like the syringe cards) are worth -1 point at the end of the game.

Alternately, you may play three rounds, totalling the scores from all three rounds. The player with the most points is declared the winner.

Obviously, the best thing to do is to use the information available to you to try to deduce which colour X card is in the box. The most valuable information in this regard is what X cards the other players have. You can learn this with syringe cards, by picking up an X card that has been discarded, or by agreeing to trades in which you get an X card. You might get lucky and receive an X card in a pass action.

But it's kind of unlikely that you'll get to do that often, if at all. Instead, you must look at which cards are being discarded. 'Oh, I see that Dave has discarded three blue cards; does that mean that Dave knows that the card in the box is not the blue one?' 'See how a lot of people have discarded pink cards? Maybe they know something I don't...'

Also, there is a certain amount of screwage in the game. It was pretty common for players to pass each other cards that they knew would give no additional information to the person receiving it. The kindergartener, in particular, delighted in giving unhelpful cards to the other players. I am told that the game is a good deal more cutthroat when only adults are playing, as players frequently choose the discard action, meaning that you would often have to decide which colours to lose before you'd had much chance to develop much of an idea about which card was in the box.

In the game that we played, we misread the rule about abiding by the agreed upon terms of trades; it was very frequent for us to say we were going to pass the other player an X card, and then pass them something else entirely... That made for an interesting variation on the game.

I enjoyed the game. I felt it was an interesting combination of social dynamics and logical deduction. If that sounds like something you'd enjoy, then you should definitely give this game a shot. But perhaps that doesn't sound like something for you, in which case, feel free to pass on it.

However, let's not forget the six characteristics of a good game:


Another game that has all six! So I'd say there's a good chance you'll end up liking this game! But even if you don't, I hope you always remember to