In 2013, Repos productions released a game called Rampage. It was inspired by, and in part, based on the 1986 video game of the same name. Alas, Repos had not secured the rights to use this name, and so in June of 2014, the game was rereleased as Terror in Meeple City.

I recently got to play a game with a friend of mine. He had managed to acquire one of the original Rampage versions right as the new edition was being released. So the photos I have will look slightly different from what you can expect to find if you go out and buy the current Terror in Meeple City.

With that said, let's get on to the review, staring (as always) with some numbers!


An overview of Terror in Meeple City

Run, puny humans! Flee in terror from the monsters destroying your city!

In Terror in Meeple City, players take on the roles of giant lizard monsters rampaging (sorry) through the city, destroying buildings and eating people. This is, for the most part, a dexterity game, though dexterity honestly has little to do with it. It's more of a physics game, but even then, it's so hard to predict what the components will do that it may almost be seen as completely random.

Here's how it works: the board has a number of buildings, which are made up of several thick cardboard 'floors,' stacked on top of one another by propping them up with meeples at each corner. Perhaps this photo will help you to understand what I mean: 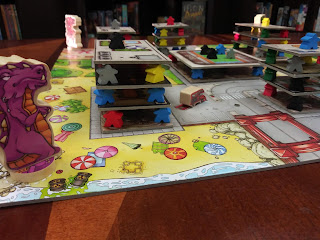 Players get two actions each turn. They may use these actions to move and/or to attack.

Moving is accomplished by removing the monster body (the main part of the monster, the upright portion visible in the photo above) from the 'paws' (the disc on which the body stands). The 'paws' may then be flicked with the fingers across the board.

Attacking may be done in one of three ways:
This will result in some of the buildings being partially or completely knocked over, like so: 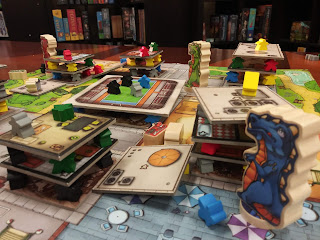 After your two actions, you may eat any meeples that are on the ground (or any building floors that are touching the ground) in your neighbourhood, up to the number of teeth you currently have (you start with six, but may lose up to four of those teeth as you take damage in various ways).

However, any meeples that fall off the board are considered to have escaped, and as the number of escaped meeples increases, bad things will start happening to your monsters.

There are a few other minor details as well, but they're not really important for understanding how the game works.

Ending a Game of Terror in Meeple City

Once the last building floor has been eaten or knocked off the board, all players get one last turn. Alternately, if the board used to keep track of escaped meeples is completely filled, the game ends immediately with the current player being disqualified from winning.

Each player scores ten points for each set of meeples in all six colours that the monster has eaten. They also score one point for each building floor they ate, two points for each point of damage they did to other players' monsters, and any applicable bonus points from character cards. The player with the most points wins.

I'm disappointed that they didn't get permission to use the Rampage name. I enjoyed playing the video game back when I was a teenager, and it would have been awesome to get to play a board game version of it. Still, whichever version you have, I personally think it's a delightful light-hearted romp through whimsically wanton destruction. It's great for kids as well as the 'young at heart.'

But as always, we'll finish with a look at the Six Characteristics of a Great Game:
All six. Excellent!

Of course, that doesn't mean you'll like it. But hopefully, you can decide for yourself based on this review whether you'll like it or not! And whatever you decide, I hope you never fail to