I was thinking about it today as a result of a map I was working on. I adapted this from one I found online several years ago. I think I used it in the GURPS Fantasy/Supers game I ran for a friend, but I could be wrong. Anyway, I've had it floating around for many years, and I'm still pleased with it for many reasons, not least of which is because of the aesthetic quality of the map itself. So I decided to make a digital version of it. Here it is: 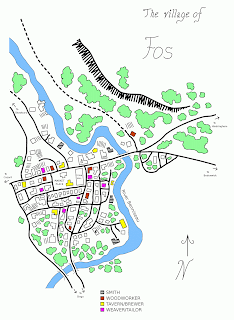 One of the things I most like about it is that the buildings and the layout of the town itself are based on what I know of early medieval towns.

For example, before the advent of automobiles, it was extremely uncommon to have streets laid out in grids. There weren't districts like modern cities have (such as residential areas and business areas), but instead, homes and shops are intermingled throughout. Especially in smaller villages such as this one, homes weren't multi-room affairs, but small shacks that consist of a single room with benches to serve both as seats and beds, with a place for a fire in the middle.

Here's what I mean: just outside of the city of York in northern England is a museum called Murton Park. A large section is a recreation of a small Viking village. Here are a few photos to give you an idea of what it looked like, based on archaeological and historical evidence: 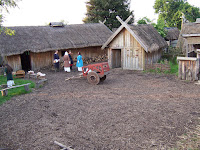 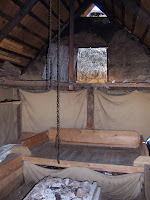 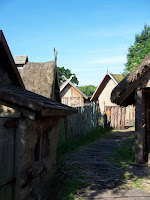 The first photo, of a small group of people standing next to a long building with several smaller houses nearby, shows the longhouse, which served as a meeting place, for village business, festivals, and the like. The rest of the buildings were more like the houses on the right of that photo, and in the second photo (the one that shows several of the smaller houses with a narrow road wending between them). Each of these was the home of a single family, who shared the one room that made up the house. The last photo shows the interior of one such home; just a single room with benches to sit and sleep on, and a small fire pit in the centre.

This is, of course, just one basis for a fantasy town. Depending on your preferences, you might base it on more 'high medieval' designs, such as the layout of the German city of Marburg in the 12th Century. Or you might model your settings on how the Greek city of Aigio looked in the 6th Century.

The point is that many fantasy settings suffer from what Christopher Ryan and Cacilda Jethá termed 'flinstonization:' the tendency to view the past through the filter of what we know in the present. But how much more interesting, how much more exotic, would these fantasy worlds (which are supposed to feel exotic; after all, they are 'fantasy' worlds) be if we changed up such simple things as how the towns are laid out, and why.

Anyway, that's what I was thinking. I may make more maps like this for people to use. Keep an eye out. Until then,