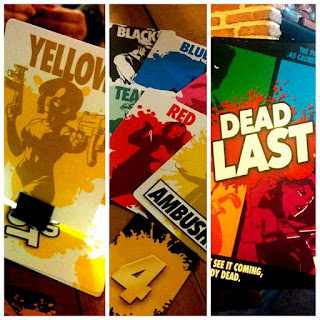 An Overview of Dead Last

Players all stand to inherit a substantial sum of money, but only if everyone else is dead. Thus, they must engage in collusion, secret alliances, and backstabbing to knock each other off and be the last one alive.

Here's how it works: each player has a colour. They stand their cards, which indicates their player colours, in plastic bases which hold the cards upright in front of them. They then hold in their hand a set of voting cards. These consist of one card for each other player, as well as an 'ambush!' card.

For example, if you are playing Teal, you have the Teal character card standing in front of you, and hold in your hands one card for each other player in the game (in a nine-player game, for instance, you may have a Red, Grey, Purple, Yellow, Pink, Orange, Black, and Green card in your hand). In addition to these eight cards, you have one of your own colour (in this case, Teal) that says 'Ambush!'

The round begins with players discussing who to kill. Such discussion does not have to be overt; in fact, it's generally better if it's not. You are encouraged to use any covert means you can: furtive glances, winks and nods, flashing cards, subtly pointing, nudging under the table, and so forth.

Eventually, everyone chooses a card from their hand. The card you choose will indicate who you're trying to kill. Everyone reveals their cards simultaneously. Whichever colour has received the most votes is the Victim. If there is a tie for most votes, then everyone in that tie is a Victim.

Victims are killed, and are knocked out of the round. They place their character colour card down on the table to indicate that they are out for the remainder of the round. Any player who did not reveal a card corresponding to one of the Victims is also killed (for example, if Green was the Victim and you played a Teal card, you are killed).

However, if a Victim has played his 'Ambush!' card instead of voting for another player, then he is not killed. Instead, he gets to choose one of his attackers to be killed in his place. This card must be used wisely, though; if you play your 'Ambush!' card and are not the Victim, then you are killed anyway!

Voting continues in this manner until one of three conditions are met:

The Gold Bar cards each have a point value from 3 to 5 listed on them. There are always four in the centre of the table. If, at the end of any voting round, there are fewer than four cards, the supply is replenished. The first player to reach the target point value (which depends on the number of players) is the winner.

This game is quick and bloody. It's also quite humorous; players are constantly bantering as they try to convince one another to target a certain player, or talk smack amongst each other. And when the cards are revealed, there is often much shouting of 'Ohh!' as players realise their plans have been thwarted by someone not going along with their plan.

I remember one round in particular in which I was about to choose a colour card from my hand, when I suddenly realised that I was feeling very suspicious about the other players. I can't say what it was that tipped me off, but I put the card back in my hand and chose the 'Ambush!' card instead. It turned out to be a good thing I did, too, as every other player had chosen my colour.

However, the rest of the game did not go so well for me. As I've mentioned in the past, I find social cues more difficult to read than most. This means that I am often at a loss as to how other players are trying to get me to vote. So many of those subtle social signals that make up the fabric of most people's daily lives go completely over my head. That made this game very hard for me to play well.

I know I wasn't the only one. One of the other players announced at one point that she was a high-functioning autistic, and she was suffering the same problem I was (though probably on a larger scale).

So ultimately, this game is really going to appeal to people based on their existing social skills. Unlike with most games, which provide a framework for social interaction, Dead Last relies specifically on those social interactions.

Of course, that doesn't mean it's a bad game. Just that its appeal will be somewhat limited in the arena of players. So give it a try! Heck, even if you're socially inept as I am, give it a try anyway. You might find it works for you in a way that it did not for me. But whatever you decide to try, remember as always to