As one of my christmas presents, I received the Star Trek Road Trip board game. When I went to Board Game Geek to update my collection, I discovered that there was virtually nothing in the entry for that game. No photos, no description, and just the tiniest hint of an overview in the text description.

In the course of working to update these shortcomings, I decided to write a review so that I could add it to the entry for this game. So today's post will be a review of Star Trek Road Trip. Activate inertial dampers, we're about to engage the warp engines!

Trainees, to the briefing room. You are all cadets at Star Fleet Academy who have been chosen to participate in the Enterprise Challenge. You are required to travel to some uncharted planets to accomplish some tasks, returning to your dormitory after each task to verify completion of that task. Beware, however, as you're likely to encounter hostile attacks, and if you drain your weapons in fighting off these attacks, you'll be required to complete one of those tasks anew! The first player to complete all four tasks is declared the winner of the Enterprise Challenge!

There are actually several games in the 'Road Trip' series. They're all basically identical; they've just changed the artwork and text to reflect the new setting. Existing titles in this series include Batman Road Trip, Zombie Road Trip, and (interestingly enough) Bacon Road Trip. They all work like this:

There is a game board that consists of an outer track and an inner track. You must travel around the outer track, starting from your colour's home based (called 'dormitories' in the Star Trek version), until you collect a pass that will allow you to move to the inner track. Along the inner track are spaces (in the Star Trek version, called 'uncharted planets') which have four different victory tokens ('Federation tokens' in this version) that players are required to collect. When you land on one of these spaces, you must engage in a 'Hostile Attack' at level 3 (that is, you're rolling against three enemy dice). If you are victorious, you may choose one of these tokens. It's unsecured, however; you must carry it back to your home base to secure it before you can collect any more. Until it's secured, other players may ambush you and cause you to lose that token. The first player to secure all four tokens is the winner. 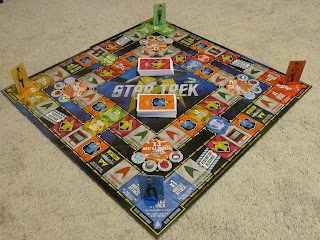 Game play is basically roll-and-move. When you move, you carry out the instructions on the space on which you land. Possible spaces include: gain or lose phaser blast tokens (these tokens serve as your life counters; when you run out, you lose one of your Federation Tokens, and return to your dormitory where you receive ten new phaser blast tokens); teleport to the other side of the board; draw a card (cards include 50/50 cards, which are carried out immediately, and may have either beneficial or detrimental effects, and action cards, which are held until you choose to use them, and are always beneficial); roll again; blockade spaces (which are essentially the same as the Jail space from Monopoly); and 'Hostile Attack' spaces.

The Uncharted Planets are a little different; they don't have an associated colour, so nobody gains the phaser blast tokens that they player loses. Also, the hostile forces battled on that space roll three dice. If the player is victorious, he can choose one of the Federation Tokens available on that space to carry back to his dormitory. It's unsecured until he manages to return to his dormitory, and thus vulnerable to ambush by other players, and he's only allowed to carry one unsecured token at a time. But once he makes it back to his dormitory, it's secured and can only be lost as a result of running out of phaser blast tokens.

That's pretty much it.

It's definitely not a serious game for hardcore board gamers, like many of the other games I've reviewed here. As far as I can tell, it's going to appeal to two categories of players:

I'll admit that I'm definitely in that second category. As such, I enjoyed this game even though it's lacking in strategy or player agency. Especially since the cards carry humorous references to the original series (such as the card that reads 'When stuck in a no-win situation, you remember Captain Kirk's success over the Kobayashi Maru. Not believing in a no-win situation, you redefine the problem to escape the situation. BYPASS BOARD ACTIONS' which is amusing to those players familiar with the original series and the films based on it).

Otherwise, the biggest downside to this game, in my opinion, is the phaser blast tokens. They can be a cumbersome way to keep track of life points. Paper notes like Monopoly money is easier to handle, if only just.

Anyway, that's all for this week. Until next time, I say to you, 'Live long and prosper,' and: