This week is a review of the family game Scotland Yard. Don't be fooled by the fact that it's a Parker Brothers game marketed at families; despite its simple format and easy rules, it has a lot to offer the serious gamer. So let's get right to it and look at this fun little game. 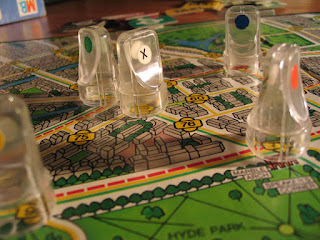 And much to the surprise of nobody at all, the first thing we see in reviewing this game is the ratings: 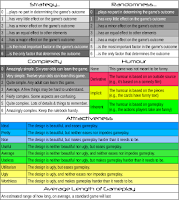 Click on that to see a larger version if you need a reminder of how my ratings system works. With that in mind:

In this game, the detectives of Scotland Yard are trying to track down Mr X, who is loose in London. One player takes on the role of Mr X, and the rest are detectives. If Mr X can avoid capture for 24 rounds, he wins. If any of the detectives are on the same space as Mr X before that time, however, the detectives claim a joint victory. That's pretty much it. The rest is details.

The board is a map of central London, complete with many landmarks labelled, including Hyde Park, the Houses of Parliament, and the Tower of London. Nearly 200 of the intersections on the streets are marked with a number; each player is randomly assigned one of these numbers to serve as their starting position. Each number is shown in an icon that has three coloured areas; most of these have all three areas yellow, indicating that they can only be reached (or departed) via taxi. Some of them have one area shaded green, indicating that that intersection is accessible by bus. A small handful of them have one area yellow, one area green, and one area magenta. These tri-colour locations can be reached by taxi, bus, or underground (the subway). All these icons are connected by coloured lines indicating how players can travel from one icon to the next; you may use a Taxi token to travel along the yellow lines, a Bus token to travel along the green lines, and an Underground token to travel along the magenta lines.

Travel is limited, however. Even if the intersection you currently occupy is on (for example) a magenta line, you can only take the Underground if your current intersection is an underground station. You can't jump on the subway halfway between stations! Furthermore, no matter which mode of transport you choose, you must go from your current location along the appropriate coloured line to the next intersection of the appropriate colour; you can't skip over one taxi space to go on to the next! Finally, not all adjacent intersections are connected by all colours; sometimes, a path coloured for the Underground does not have a Taxi path going in the same direction.

This is why the tokens are so important. The detectives are assigned a specific number at the beginning of the game. If you run out of a particular type, you can no longer use that type of transportation. Most of your tokens are Taxi tokens; they are the most common form of transportation, but don't get you very far. Bus tokens are second most numerous; you have a moderate amount, and although the bus stops are more limited, they take you (in general) a little further than a taxi will. You have fewer Underground tokens than the other types; Underground stations are also the rarest on the board, but they can take you sometimes halfway across the map.

Mr X, unlike the detectives, does not have a limit. Every time a detective uses a token, Mr X receives that token. Also, he does not have a pawn on the board as the detectives do. He keeps track of his movements on a pad of paper, and covers the number of his current location with the token he used to travel to that location. Every so often (on turns 3, 8, 13, and 24), he reveals his location by placing his pawn on the board in the correct position. The detectives don't know from which location he came, nor where he goes from the current location. They only know where he is, and the type of transportation he used to get there.

This is where the game gets fun. The detectives must then use logic and deduction to discern where he may be next. By looking at what form(s) of transportation he used from his last known location, detectives attempt to deduce where he's gone next. Meanwhile, Mr X is trying to deceive the detectives and slip free from their pursuit.

Despite the secrecy, Mr X is at a slight disadvantage. To offset this, he has a couple of powers that the detectives do not. Aside from an unlimited number of each type of token, he also has two ×2 tokens which allow him to skip a round of detective moment. In addition, he has a couple of black tickets, which may be used in one of two ways. He may replace any transportation token with a black ticket, so that the detectives don't know how he travelled on that turn. Alternately, he can use the black tickets as a boat ticket, taking one of three black lines marked on the River Thames.

It's a fairly simple game. But don't let that fool you. It's very thinky-thinky. If you like deduction, logic, and using your brain a lot, you'll find this game very enjoyable. If you've played this and decided it's not quite intense enough for you, you can always try Letters from Whitechapel, a Jack the Ripper themed game that is, mechanically, very similar to this one. But I think that, even for a simple family game, Scotland Yard is sufficiently challenging and enjoyable for even the most die-hard board gamer.

That's all for this week. I'll see you here next week with another exciting installment of the Game Dork's Gaming Corner. Until then,