It's time for another board game review, and I've got a good one for you this week. We're going to look at the game Colosseum by Wolfgang Kramer and Markus Lübke, published by Days of Wonder and Edge Entertainment [editor's note: this article was written before the Tasty Minstrel Games version was released. The new edition has some minor additions to the rules, and different artwork, but is otherwise the same]. Players own colosseums in ancient Rome, and are competing to put on the greatest show.

Let's start in the usual place, with the numbers:

There are so many pieces involved in playing this game, it can take a while to set up. The board serves as a pretty, but ultimately excessively large, organisation area in which many of the pieces are organised. But the bulk of the pieces are placed in front of the players themselves, or in storage to one side, with no organisers at all. 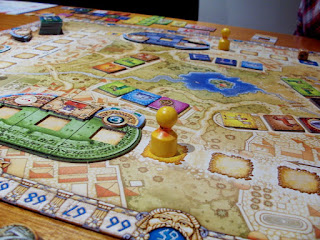 The board consists of three main parts: the score track around the outer edge, the nobles' track, which follows a rectangular path just inside the score track, and the marketplace, which is the where five sets of three tiles are placed in the centre of the board. The game takes place in five rounds of five phases each.

In the first phase, players take turns making a single purchase. They can purchase an expansion to their colosseums (each player starts out with two end pieces placed at specific points along the nobles' track, and can add up to two central pieces to their colosseums during this phase), a season ticket section (which is good for 5 bonus points each round), an emperor's loge (which grants bonuses to how you move the nobles in phase 4), or a new event programme (more on these in a moment).

In the second phase, players take turns bidding on tiles in the marketplace. Each tile represents a component of a show that they may put on in their colosseum. They include things like gladiators, comedians, musicians, priests, chariots, horses, lions, scenery, cages, and torches. A player bids on a set of three tiles, and then other players have the option of attempting to outbid that player. Ultimately, each player must buy a single set of tiles. The sets are replenished before each player's turn at bidding, but if a player gets outbid on his turn, the sets are not replenished until the next player's turn begins.

In the third phase, each player gets an opportunity to try to trade asset tiles with other players.

Ultimately, it leads to the fourth (and most important) phase: putting on a show. Each player starts the game with two small event programmes. During the fourth phase, each player has the opportunity to put on a show using the asset tiles required for their event programme. For example, a player may put on the 'Cavalry of Spartacus' show, which requires three gladiator tiles and three horse tiles. If the player has all six of these tiles, the event is worth 12 points. There is a chart at the bottom of the event tile that displays how many points the show is worth if you don't have all the tiles (for example, if you're missing one of the tiles for Cavalry of Spartacus, regardless of which tile it is, the show is only worth 10 points. If you're missing two tiles, it's worth eight points. And so on.

Before you put on your show, though, you roll a die. The dice are numbered as follows:  I-III, II, III, IV, V, or VI (yes, the dice have Roman numerals printed on them. This can be hard to read, especially when a IV or VI come up, as it's easy to mistake one for the other, and this is one reason I gave the game a 'Nice' rating under 'Attractiveness'). You move one of the nobles clockwise along the noble track that many spaces (if you get the I-III, you get to choose whether to move a noble 1, 2, or 3 spaces). If you have an emperor's loge on your colosseum, you get to roll two dice, and either move one noble the combined total, or use one die for one noble and the other die for another. There are three consuls on the track, two senators, and an emperor. If you have a noble in your colosseum when you score, you get bonus points (three points for each consul, five points for each senator, and seven points if you have the emperor).

After moving the nobles, you score your event. The base score is shown on the event programme, plus bonuses for nobles, and other additional points (+5 for each season ticket section you have in your colosseum, +3 for each podium [podiums are awarded in phase 5], +5 for each event you've already put on, and +4 for each star performer [the player with the most -- minimum three -- of each kind of living event tiles: gladiators, lions, horses, comedians, etc.; non-living tiles like scenery and torches don't have star performer bonuses. So the player with the most gladiators gets the gladiator star performer tile, the one with the most lions gets the lion star performer, and so on]. Emperor tokens, which are normally awarded if you get a noble to land on certain marked spaces on the noble track, can be redeemed for three additional points as well).

The important thing about this game is that points are not cumulative. You get points equal to the highest-scoring show you've put on. Thus, if you perform a show for 20 points in round one, and a show for 40 points in round 2, then your current score is not 60, but 40. If you perform a show worth fewer points in a round than you had in a previous round, then your score does not change. It stays at the value it was at previously.

But that doesn't mean it's not important to score points in each round; you get money for each show you put on. However many points you score in a round, you get an equivalent amount of money in Roman Coins. These may be used to make purchases in Phase 1 as well as bid on tiles in Phase 2, and can also be used during the trading in Phase 3.

I really like this game. It's a lot of fun, and it involves more than just strategy. You must carefully balance which tiles you have and what tiles you expect to be able to acquire later with what event programmes are available. You also need to be able to negotiate trades, bluff players during bidding, and balance the events you're putting on now with the ones you expect to put on later. My one complaint is that some aspects of the game are poorly designed. There's a lot of wasted space on the board, as beautiful as it is, that could have been better utilised in organising the many pieces that each player possesses. In front of me, I may have as many as twenty asset tiles, a pile of coins, a few star performer tokens, emperor tokens, and up to five event programmes. These can be hard to organise, and it would have been nice to provide players with small boards that make this task easier.

But that's a small concern. I will usually not turn down a chance to play it. And that's all I have for this week. Until next time,