The Importance of Stories

Over the last couple days, at my summer job, I was working on a project that involved this article on The Irresistible Power of Storytelling as a Strategic Business Tool in the Harvard Business Review. The general gist of the article:

Humans need stories. We live our lives through the stories we tell each other. It's been a part of our racial archetype since our ancestors were living in caves and drawing stories on the walls. People respond most strongly to stories that use Freytag's pyramid. Advertisers that use Freytag's pyramid as a structure for their advertisements have a greater return on investment than those who don't. So all companies should turn their advertisements into stories.

Setting aside my disgust at so shamelessly corrupting what may be the quintessential aspect of human existence for base monetary gain, I wish to talk (yet again) about the importance of telling stories. It's not just an enjoyable pastime; the article linked above mentions research that shows how the climax of a story triggers the release of cortisol in human neurological systems. This causes us to focus on the story, wanting to know what's going to happen next. Even if the story is completely predictable, and we have no reason to think that the hero won't save the day at the last minute, we still hang on every word.

The cortisol is augmented by oxytocin, our 'feel good' hormone, especially if the climax involves things like cute animals. And a happy ending triggers the release of dopamine, which engenders contentment and compassion.

All this from a simple pyramid: 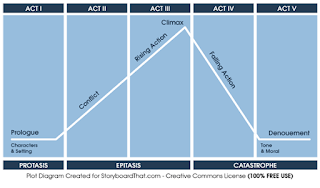 I love telling stories. One of my favourite things to do when I'm hanging out with friends is to retell events that have happened to me, or to people I know. I love telling the Alaska story, or the story of the wreck in which I almost died. And, as regular readers of this blog will know, I love to play RPGs because it's another form of storytelling. I get a significant emotional thrill from being involved in the climax, the falling action and denouement.

It's why I don't care for video games. Sure, there are sometimes stories involved in the games, depending on which game you get. But it's almost always preprogrammed. The player has little to no effect on the direction of the story. With rare exceptions (Chrono Trigger being the most notable exception of which I'm aware), the actions of the players don't affect how the story progresses, but merely whether the story progresses.

Sure, there's nothing wrong with stories that are not affected by the audience. Movies and TV shows are the same way. So are books, really. But having once tasted the thrill of influencing the outcome of a story, I've found I have a taste for it. Why go back to static, passive stories, when I can take part in a dynamic, interactive story?

The last game I ran was a one-shot Changeling session, designed to introduce the game to players who'd never played it. I took the 'World of Stone' campaign that I ran last summer, and condensed it down to a three-part one-evening story. That campaign followed the Freytag's Pyramid scheme very closely. It was designed on a set-piece scene design, with four major encounters, each one leading into the next in some way.

It started out with a group of changelings that happened to work together in the forensics department of the Hilo police force. They were contacted by a menehune (a native Hawai'ian faerie) named Lanahi, whose village had been turned to stone. They followed him to his village, learned as much as they could, and set out to track down the person who had done it. This was the exposition: introducing the characters, the conflict, and the narrative hook.

There were several encounters afterwards. They learned more about their antagonists, which led to an aerial chase scene on bizarre flying machines, pursuing a hog pooka.  They rescued the young girl that one of the PCs had sworn to protect from the rival of that same PC. They had an encounter with a shark that led them to realise that the mentor of another of the PCs wasn't really a selkie as he'd led everyone to believe, but was in fact a mer who had been banished from the undersea kingdoms. And they got trapped in a living house in the Dreaming who kept giving them various tests, and released them only once each one had passed his or her test. This was the rising action: all steps taken towards solving the conflict of the story.

Eventually, they had the big showdown with the main antagonist: an insane nocker who had cursed Lanahi's village for the purpose of stealing their sacred conch shell, which she used to power a bizarre single-occupancy tank that could cause the volcano at the centre of Hawai'i's big island to erupt. This was the climax: the conflict comes to a head.

The battle, of course, ended in success for the PCs. They disabled the nocker's machine, captured her, and remanded her to the appropriate changeling authorities. This was the falling action: we see how the conflict is resolved.

Finally, the remaining loose ends are tied up. Lanahi's village is restored, the conch shell returned to them, and the PCs return to their normal life, having grown, learned, and changed from their experiences. This is the denouement, the resolution: we finish out the story and see what has changed as a result of the story's events.

This story was so powerful that not only did the original players enjoy it, but the super-condensed version that I ran as a one-shot had the participants talking about the game for weeks afterwards.

This is the power of a story.

If you haven't been involved in a story/game of this nature, I highly recommend it. It's a lot more fun than just killing monsters and collecting treasure. I'm not saying you can't do that as well; the PCs in 'World of Stone' defeated many adversaries and earned some pretty nifty toys in the process! But they did it as part of the story progression.

And that's what matters.

Anyway, I think that's all for this week. I'll see you back here next time! Until then,