I often talk about the heavy, thinky-thinky type games that I really enjoy playing. But, as I hope may be evident from some of the games I review on here, those aren't the ONLY types of games I like to play. Sometimes, it's a lot of fun to play a simple, light, fluffy type of game that's enjoyable because it's silly or funny. The Red Dragon Inn is one such game. Here are the numbers:

Strategy: 2
Randomness: 4
Complexity: 2
Humour: Implicit and Inherent
Attractiveness: I'm torn between Average and Pretty...
Expected length of Game Play: Varies with number of players; usually about 15 minutes for two players, and add an extra 7 or 8 minutes for each additional player.

The core game contains the equipment needed for four players. There are four 'sequel' games (Red Dragon Inn 2 through 5), which can be played as standalone games for up to four players, or combined with one another. You can have a number of players equal to the number of base sets times four. You can also buy expansions, which are individual characters allowing you to add one player per expansion.

The premise of the game is this: each player takes on the role of an adventurer from a D&D style adventuring party. The group has just completed its latest dungeon crawl, and has returned to town to celebrate their victory and spend their loot at the Red Dragon Inn.

Each player chooses one of the available characters. The base set(s) plus any expansions you have determine which characters are available. The first base set contains Deirdre the Priestess, Fiona the Warrior, Gerki the Thief, and Zot the Wizard (with his familiar, Pooky the rabbit; who, by the way, can be played as his own character if you buy his Allies expansion). Zot the wizard is so far my favourite character.

Anyway, each character has his or her own unique character deck. This deck provides the actions and reactions that a player can take. About a third of the deck is cards that all characters have in common, but the rest are specific to that character, and represents that character's strengths and weaknesses. Fiona, for example, is good at dealing out damage and intimidating the other characters into not targeting her. Gerki is good at stealing gold from other players and defending his own. And so forth. 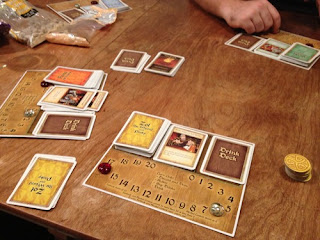 The play mat also lists the steps to be taken on each player's turn.
As you progress, drinks will cause you to gain drunkenness points (you move your drunkenness token up 1 for each alcohol point you consume). Other players' actions (and, occasionally, some drinks) will also cause you to take fortitude damage, moving your fortitude token one space down for each point of damage you take. If ever your fortitude and drunkenness tokens meet, your character passes out, and you're out of the game. If ever you run out of gold, you're out of the game. The last player remaining is the winner.

That's pretty much it. There are a couple of minor complications, though:
And that's it.

This game is a lot of fun. It's hysterical, as the wacky hijinks of the characters interact to produce unending hilarity. It's not the sort of game that should be taken seriously; the vast majority of the fun is in being silly as you play D&D characters partying hardy after their last adventure. Far more so than with most games, this one is not about who wins, but the funny things that happen in the course of the game.

The last thing I want to say: the attractiveness level of this game was really hard to determine. The artwork is beautiful, with cute but well-done illustrations on every card. The play mats are lovely, made to look as if they are on wooden tavern tables. Even the gold coins are pretty, with lavish illustrations on cardboard tokens. But that's the problem; it's all on cardboard. As lovely as those cardboard tokens are, I can't help but think that they would have looked better as plastic coins. Now, I understand that The Red Dragon Inn 5: The Character Trove was just a few months ago successfully funded on kickstarter, and one of the add-ons available for that was metal coins. That sounds amazing! But I don't know if those are available elsewhere. So I feel as if the artwork alone should merit the 'Attractiveness' category being rated at 'Pretty,' but the fact that it is just printed on cardboard should limit the game to 'Average.' So I leave that one undecided.

I really want to pick up a copy for myself some day. Until then, I'll have to rely on my local board game cafe to get my fix...

And with that, I bid you farewell for another week. Until next time,