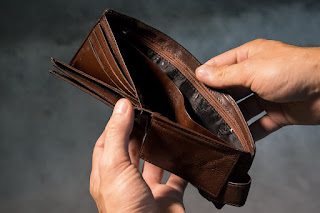 I have been engaged in a debate on social media about whether it's acceptable to refuse to try any roleplaying game that isn't Dungeons & Dragons. One of the arguments that I keep hearing people make is 'I'm poor, and roleplaying games are expensive.'

This is a valid point, but I have a solution.

Ok, I have a solution and a comment. First, the comment: Hasbro has worked very hard to make people believe that you have to have every book in order to play (and more to the point, that each player needs a copy of the Player's Handbook, at the very least) in order to take full advantage of Dungeons & Dragons. That is very much not true. Most games work just fine if all you have is a single copy of the core rules. Supplements are optional, and in some circumstances, it's annoying to share a single rulebook (I remember trying to level up a character in D&D 3.5 when sharing a single copy of the Player's Handbook, and it was a challenge to say the least), but many games don't require the rulebook as much when advancing characters.

But now, on to the solution. There are a ton of free roleplaying games out there. Let's talk about some of them.

To start, there are plenty of 'Pay What You Want' titles available. If you go over to DriveThru RPG and click on the Pay What You Want filter, it will bring up a lengthy list of products, from core rules to a staggering array of supplements, for which you can pay whatever price you like, even if that price is $0!

Technically, Fate is offered as a Pay What You Want title, although the publishers encourage you to try it out for free, and come back later and pay something if you decide you like it.

But there are a number of titles on that site that are completely free! So I thought I'd compile a short list of some core rulebooks that are free on DriveThru RPG, sorted by genre. This is not an exhaustive list by any means, but it should serve as a good starting point.