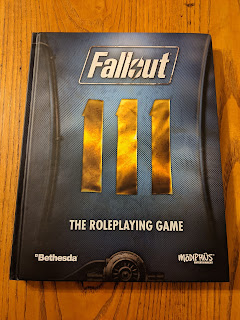 An Overview of Fallout: The Roleplaying Game

Fallout: The Roleplaying Game from Bethesda Games is 429 pages of delightful video-game-to-roleplaying-game goodness. It's set in the world of the popular Fallout video games (the default setting in this TTRPG is the beginning of Fallout 4, so in the year 2287. The core book is chockablock with all the usual hallmarks of the Fallout line: caps, pip-boys, and retro-futuristic technology.

As is usual for games by Modiphius, Fallout uses their 2d20 system. It is tweaked to fit this specific setting, in ways that I think are well-thought out and sensible.

This book is nice. It's aesthetically pleasing, with nice organisational touches (like the index bar along the top of the pages which, in addition to letting you know where in the book you are on any given page, makes it easy to jump to a particular chapter by looking at the coloured bars on top of the closed book). From a purely aesthetic viewpoint, the only complaint I have is that it is printed on thinner paper. This gives it the advantage of fitting more pages into a smaller space, but the disadvantage of being more prone to tearing. I, for one, tend to prefer books that can handle a lot of abuse. Not everyone will care about that, but it is a consideration.

My biggest actual complaint about this game is that it's not as friendly to visually impaired people as some other games are. The text is black on a light beige background with a faint texture. This is, in itself, not terrible, although it's not ideal. A bigger issue is the sidebars and section headings, which are all done in the colours of the current chapter. For example, the 'Gamemastering' section is marked with a sort of dark aqua colour, so the headers for each section in that chapter is white text on a dark aqua banner. Sidebars in that chapter are black text on a pale aqua background.

This is a bigger problem in earlier chapters, which are done in some shade of yellow or orange. The 'Equipment' chapter (which is one of the longest) is in a dark yellow. This makes the headings especially problematic for those with visual impairments.

But the biggest concern is that the book is written predominantly in a serif font. Sans-serif fonts are generally considered to be better for people with visual disabilities or dyslexia. Sure, it's not a great difference, but the difference does exist.

Otherwise, the production value is very good. The artwork is beautiful and thematic, and there are lavish splash pages at the beginning of each chapter.

I especially like the way the feel of the original video game is maintained with the juxtaposition of rich artwork and Vault Boy, the simplistic, stylised 1950s' Americana character that is so closely associated with the Fallout series. 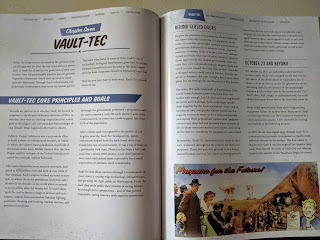 Overall, I'd rate the production value of this book as quite high.

The game obviously takes place in a post-apocalyptic wasteland. The United States have been ravaged by nuclear war, and those who are still alive tend to fall into one of two categories: mutants and non-mutants. As with the video game, the TTRPG is intended as an action game, and there's no end of adversaries prepared to end your life unless you end theirs first.

PCs may be survivors (descendants of people who built their own protections from the nuclear war), vault-dwellers (those who rode out the destruction in a Vault Tec fallout shelter), an initiate of the Brotherhood of Steel (a fractious group dedicated to giving humanity a belief system to guide them through the end times), a ghoul (mutants who resemble zombies), super mutants (tall, rage-filled killing machines), or even the robotic Mr Handy (a floating three-armed machine).

One thing that I really liked about the Fallout game is that it doesn't give you any but the sparsest details about the setting until after the chapters covering rules, combat, character creation, and equipment. Most games (especially the ones I tend to play) hit you with the setting first before going into the system. But with Fallout, it just feels right to wait until the crunchier bits are finished before getting to the fluff. Maybe it's because this game will appeal more to an action-oriented player than a narrative gamer. Whatever the case, I think it was the right decision.

Like other 2d20 games, success is accomplished by rolling 2d20 against a target number determined by adding the appropriate attribute to the relevant skill. Rolling under the target number counts as a success. The GM may increase the difficulty of the roll by requiring more than one die be successful for the task to succeed.

Fallout preserves the challenge dice from other 2d20 games, although they are called 'action dice' in this iteration. These dice are used in determining damage in combat, and may result in zero, one, or two points of damage each, with some results triggering the effects of the weapon used in the attack.

Momentum (points received when you score more successes than required and which may be spent in a number of beneficial ways) and Threat (similar points awarded to the GM which may be used to make the PC's lives more difficult) are also both present in this game, but they are simplified by being combined into one kind of point, the 'Action Point.'

I really wanted to be able to rate the crunchiness of Fallout: The Roleplaying Game. When I was preparing to write this article, I looked to see if there was a ranking of games by crunchiness level. A few people have discussed this issue, but it seems that the concept of crunchiness in a game is too nebulous to define in a really useful way. Which is a shame, because I wanted to compare this game to others with a similar crunchiness level, like Cyberpunk Red or the original World of Darkness games using the Combat supplement. It's not as detailed as D&D or Shadowrun, but it's definitely more combat-rules-heavy than Fate or Overlight.

The combat system in Fallout uses arbitrary 'zones,' much like what Fate does, enabling easy 'theatre of the mind' style of gaming. Beyond that, though, the rules for combat are pretty detailed. The rules include a hit location chart (and it's possible to buy a special set of Fallout dice that includes a unique hit location d20), and injuries to different areas of the body have different results. And, for fans of violent games, there is an extensive list of firearms and other implements of destruction. In fact, the weapons list rivals that of heavy games like Cyberpunk Red or Shadowrun!

I must admit, I was impressed with this game. Although I wish it were a little more accessible to people who have difficulty with reading, I don't really have anything else negative to say.

As I'm sure longtime readers of this blog will know, I tend to be more interested in story and narrative gaming than in combat. As much as I love the setting of Shadowrun, for example, the system is too complex and crunchy for my taste. But Fallout, like Cyberpunk Red, lands just on the edge of my 'right amount of crunch' area. If I'm ever in the mood for a violent romp through hordes of enemies, Fallout will be one of the games I will reach for.

And I think that's some pretty high praise indeed.

So if you're interested, head on over to Modiphius's website and check it out for yourself! In the meantime, I would like to offer my thanks to Modiphius for giving me the chance to read and review this really nice game.

Until next time (whenever that is),