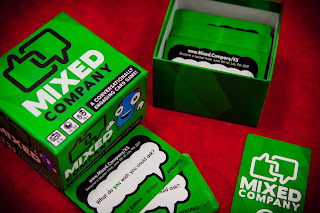 
An Overview of Mixed Company 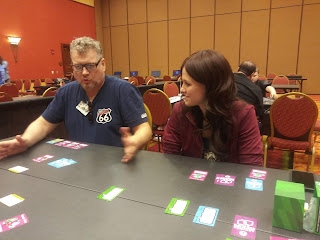 There are two play modes: quick play and full rules. In the quick play version, players receive a number of question cards, containing (obviously) questions. Some examples of questions include:


So as you can see, there is an interesting mix of serious and light-hearted questions in this game. There are also blank cards so players can create their own. Each player chooses one from their hand, and submits it to the table. Players vote on which question(s) to discuss. Then they talk about that question; how does each player answer it, and why? How do they react to the other players' answers?

There is a 'Conversation Guide' card that outlines several rules:
If needed, you can set a timer for ten minutes, but often, the conversation will reach a conclusion on its own in a reasonable amount of time.  Once finished, players may award trophy cards. Each player receives two trophy cards at the beginning of the game. These may be for achievements such as best wordplay, best cultural reference, best supporting points, most enjoyable conversation, and so on.

In the quick play rules, you may declare the person who received the most trophy cards to be the winner. However, you may decide that you don't need a winner; simply having conversations about interesting topics is reward enough! 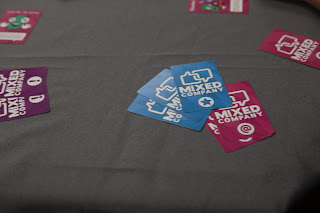 The full rules simply entail a few additions. To start, players use their voting cards to select three question cards. Each question card will be discussed in its own round. Additionally, at the beginning of each round, players assign challenge cards to one another. These cards range from silly (you may not gesture with your hands whilst you talk) to the semi-serious (you must include extra references, citations, and examples in your discussion) to the difficult (you must argue the opposite viewpoint from the one you actually hold). At the end of the round, if you met your challenge, you keep the card as a bonus point. If not, the person who played it on you gets the point.

There are also action cards. These too run the gamut; one says 'you must provide additional personal examples.' Another instructs the recipient to provide a counter-example. There's one that says you must provide an external source, such as a newspaper article. Another example is the card that asks a person to keep talking and provide more information on their current topic.

Action cards also count as extra points. If the group feels an action card is not fulfilled, it counts as a negative point. The group may also decide that an action card was not really appropriate, and may be discarded.

At the end of all three question rounds, players add up their points (trophy cards, challenge cards, and action cards). They lose one point for each card remaining in their hand. The player with the most points is the winner. 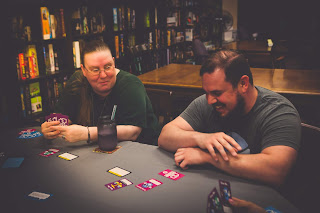 The question cards are colour-coded; green ones are for 'all ages.' The blue ones are for 'ages sixteen+.' Thus, you can easily adjust your deck for age-appropriate discussions. The blank cards have a black border, so they won't accidentally get mixed in with the wrong set.

The Kickstarter campaign offers backers the chance to suggest their own questions to be added to the deck. Additionally, they've gotten so much feedback from teachers saying they plan to use this game in their classrooms (myself being one of them) that they're already planning a follow-up version tailored for educational settings. 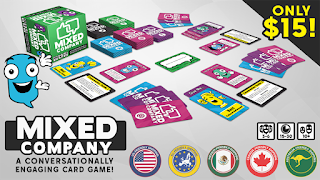 I enjoyed playing this game, both for the fun and interesting conversational aspects, and for the fact that it encourages effective conversation skills. I know that I, as a person who grew up being constantly instructed that it was rude to interrupt, now have trouble engaging in conversation in a meaningful way, as I cannot stop myself from waiting for a lull in conversation before adding my input. Most other people do not have such reservations, and will begin to add their input before the other person has technically finished talking, or interrupt one another frequently. Whereas I have a tendency to judge a conversation on the logical points being made, many others seem to think that a discussion is 'won' by the person who speaks the loudest, or most often.

It is my hope that if this game becomes popular, it will help to correct that little problem. And even if it doesn't, it's still a lot of fun. I introduced some of my friends to this game, and they were all impressed. They all ran over to the booth that Mixed Company (the company, not the game) had at the pop culture convention we were attending to sign up for their mailing list. So that's some pretty good praise!

Anyway, I hope you'll consider helping fund this project! You can follow them on FaceBook to keep up to date. And whatever you decide, please remember to always