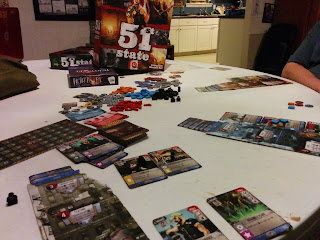 
I should point out that the version I played was the 'Master Set,' which includes both of the expansions released for the original edition. Apart from this, the artwork and components have been radically redone, and the rules have been modified slightly to make the expansions fit a little more organically with the base set. So although this version of 51st State is very similar to the original version, there will be some significant differences. For those who've played the original version, this is an important detail to keep in mind.

With that said, let's look at the numbers:

America has fallen! The survivors are trying to form a new nation, the so-called 51st State, from the ashes of the nation. By collecting resources, each faction is trying to increase their viability as a new country through gaining access to more resources, forming political alliances, and shoring up their defences. Which faction will manage to create the strongest nation? Only time (and the effectiveness of the players) will tell...

There are six factions from which to choose: New York, Texas, the Appalachian Federation, the Merchant's Union, the Hegemony, and the Mutant Union. Each faction has its particular advantages; for example, the Merchant's Guild gets a better trade rate on resources, whilst the Mutant Union is better able than most at aggressive actions, and New York is better than most at building locations.

51st State takes place in a series of rounds, each round following a standard progression: first, players draft cards. Cards are drawn from the main deck, equal to the number of players + 1, and players take turns drafting one card to add to their hand. The last card is discarded, a new set of cards is drawn, and players take turns choosing one again, this time in reverse order.

Then we move on to the production phase. Each player receives certain resources; the base is determined by your faction, plus anything awarded from cards you have in play. Resources include bricks, guns, cogs, fuel containers, workers (these five are represented by really nice wooden pieces), contact tokens (which come in blue, red, grey, or a multi-coloured wild), or additional cards drawn from the main deck.

The next phase is the action phase. There are a number of actions that players can take, and players take turns taking those actions. The first player to take actions is the one with the first player token, which passes to the left at the end of each round. Actions include:


Players continue taking actions in turn, until they decide to pass, either because they are no longer able to take actions, or because they have no more actions they wish to take. Once a player has passed, they drop out of the round, and remaining players continue taking actions. However, they may no longer target a player who has passed, either in beneficial or aggressive ways.

Once all players have passed, the round moves to the final phase: cleanup. Any unspent resources are discarded, new contact cards are drawn, and the first player token passes to the left. Play continues in this manner until someone exceeds 25 victory points, at which point final scoring takes place, and the player with the highest total is declared the winner.

It's kind of hard to tell from the description above, but the meat of 51st State really comes in the form of the cards. Any card that you draw, whether during the draft phase, the production phase, or as the result of an action, gives you three options. You can use a card to make deals, to build locations, or you can raze a card. Each has its advantages and disadvantages.

When you use a card to make a deal, you must spend blue contact tokens. Then you turn the card upside down and slide it under your faction tile, so that only the blue bar at the bottom of the card is visible. On this blue bar is an icon representing a resource of some type; usually a cog, gun, or fuel container, but possibly cards, bricks, workers, or even victory points. Whichever icon that card shows, you get one of that from this card during the production phase each turn.

The advantage of a deal is that you get a resource, automatically, for free, each turn, and other players cannot destroy your deal cards. The disadvantage is that actions made available through building are often more powerful.

When you spend grey contact tokens to build a location, you place that location face up in front of you. A location generally provides you with some benefit, be it an action that you are allowed to take, a bonus to certain abilities, or access to extra resources. The more powerful the action, the more it costs to build that card, but this can be circumvented by upgrading. This is where the bricks come in (remember those bricks, mentioned along with the cogs, guns, fuel containers, and workers in the description of the production phase above?). By spending a brick, you may replace a location with another one from your hand, so long as that location shares at least one location type with the one being replaced. This allows you to work up to building more expensive locations.

The advantage of building locations is that they often give you some really nifty abilities. The disadvantages are that they require an action to use once they've been built, they can be kind of expensive over the long term, and they can be razed (which is actually both an advantage and a disadvantage; more on this in a moment).

In the corner of each card is a 'Spoils' listing. This describes what you get if you raze a card. It's usually two or three resources, which is normally more than you get at one time from building locations or forming deals, but of course, it's a one-time-only bonus. However, aside from the obvious benefit of being easier for certain factions (such as the Mutant Union, which gets more guns and red contact tokens than other factions), cards can be razed not only from your hand, but from the locations that have been built. Thus, if you have a location in front of you that you no longer need, you can raze it to get its spoils. Even more importantly, you can raze an opponent's location to get its spoils and to deny that player any future benefit from that location!

The advantages of razing are that it can be used both to clear out your own locations that are no longer as useful as you may like and to destroy useful locations in other players' areas. The disadvantage is, of course, that it's a one-time-only action, so unless you're robbing another player of a critical card, the return-on-investment for razing cards is usually quite low.

I haven't talked much about victory points in 51st State yet, and that's because generally, victory points are not something granted by standard actions. This game is unlike Settlers of Catan for example, which grants victory points for every settlement and city that you have; instead, some of the cards that you can play will grant you victory points. Some grant them as part of a deal, others make them available as actions when you build locations with them. But in whatever manner you get them, the player with the most wins. This doesn't automatically mean the first player to get more than 25, though, as players get a bonus victory point for each location that they have built once the end condition is triggered. Thus, if someone other than the player who first passed 25 has a lot of locations in play, they may well pass into the first place position.

I enjoyed this game. I think I lost both times because I kept forgetting about the contact cards, which would have granted me those crucial extra contact tokens that I needed to accomplish my goals. Instead, I continually sat there wondering where I was going to get one more red contact token so I could raze the other players' locations... which is part of the learning process involved in getting used to playing a new game. Still, I don't think I'll need to own a copy of 51st State for myself. But I wouldn't be opposed to playing if I were at a friend's house and they pulled out their set.

Anyway, I think that's quite enough for this week. I'll see you here again next week. Until then, remember to