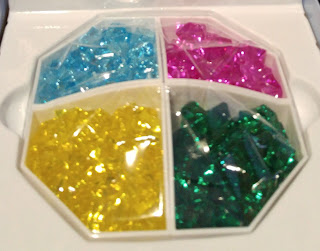 Before we go any further, let's take a look at the ratings:


An Overview of Century: Golem Edition

Players start the game with a caravan card, which simply provides spaces for ten gems, and two merchant cards. A row of six additional merchant cards and five point cards are laid out in the centre of the table. The first point card has a number of gold coins next to it, and the second point card has silver coins.

On your turn, you may take one of four actions:

To play a card, simply lay it on the table in front of you and take the action listed on the card. Cards let you do one of three things:

Take all the cards that you've played onto the table in front of you, and place them back into your hand.

You may take one of the merchant cards from the row in the centre of the table. To do so, you must place a gem (any colour) on each card in front of the one you want to take. If you're taking the first card in the row, you don't have to spend any gems. If you're taking the second card in the row, you must place a gem on the first card in the row. Place one gem on the first and second cards in order to take the third card, and so forth. If there are any gems on the card you acquire, add them to your caravan card. Slide all remaining cards over and add a new card to the end of the row.

To claim a point card, spend the gems listed on that card to pick it up. For example, there is a card worth 18 points that requires two blue gems and three pink gems to claim. Another card costs three yellow gems and two green gems, and is worth 7 points.

Once a player has six point cards (five point cards if there are more than three players), finish out the round so everyone has an equal number of turns. Add up the points on all your cards, plus three points for each gold coin you have, one point for each silver coin, and one point for each non-yellow gem you have. The player with the most points is the winner.

The rules are very simple. Game play is easy to learn, and the game does not take long at all. Yet in that simplicity is a surprisingly deep and involving game. Century: Golem Edition (and therefore, also, Century: Spice Road) combines some of the best elements of a number of types of games. There is an aspect of a deck-builder game to it, as well as resource management and engine-building. Sure, there's some amount of luck involved, but the decisions you make (and most importantly, your willingness to take risks) can have a significant impact on the outcome of the game, mitigating the effects of randomness on your likelihood of winning.

Even if you don't win, though, it's still an enjoyable game. Especially when you're playing with people who are familiar with the game; the last time I played, it was with two others who were equally experienced in playing. This meant that turns progressed both quickly and smoothly. One person would take his turn, and the next player saw that he was finished and took his turn, with most turns lasting only a couple of seconds, so that no one had to wait very long for his turn to come back around. We barely needed to talk at all for the game to occur! Such smooth gameplay is a hallmark of a great game.

But let's look at the six characteristics of a good game:
This last one (that it doesn't allow for upsets) is only because it's often hard to keep track of how many points each player has during the course of the game. There's no score track or similar item, so the only way to know how many points a player has is to look over at their cards and add up the values, and then add in the points for their gold and silver coins. Even then, the number and colour of gems that each player has changes so frequently that it's basically impossible to know who's in the lead until the game is over and everyone totals up their score.

Still, if that's the only complaint, I say it counts as a good game.

I have heard other complaints: some people say that the game suffers from 'a bunch of people playing solitaire together' syndrome. This is true to an extent, but there are ways that players must interact during the game (taking cards that another player obviously wanted for that 'screwage' effect that some players really enjoy, for example), or at the very least, keeping an eye on which cards other players are likely to try to gain for themselves. In the last game I played, for example, I was constantly checking to see what gems the other players had, so I would know whether I would have the three or four turns I would need to get the gems needed for a specific point card, or whether I should give up on that card and try for a different one.

As far as comparing Golem Edition to Spice Road, the artwork in Spice Road is a little more beautiful in the classic art style, and the theme is more serious. For some people, that's a draw. I, personally, prefer the whimsical theme and artwork of Golem Edition.

Another difference is that Plan B Games (the publisher of both versions) has released an expansion for Spice Road (my understanding is that they were originally not planning to release any expansions for Golem Edition, but fans responded negatively to that news, and so now they are going to publish an expansion for Golem Edition as well. They will not be identical expansions, so if you want the full gamut of playability, you will need to purchase both versions.

I, personally, am happy with sticking with just Golem Edition. But hopefully, you have learned enough about both games to decide which, if either (or both, maybe!) you want.

So with that, I bid you farewell once more, and I remind you as always to