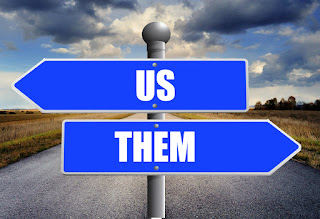 I have, in many ways, been born into privilege. I am a white, cis-gendered male. I have not faced the sort of discrimination that many women do, nor many people of other ethnicities, nor people from the LGBT+ community. However, as a child, I was excluded from most communities and activities at school. Because I was more intelligent than most of my classmates, and because I did not participate in most activities considered to be 'cool.' I wasn't a sports fan, I didn't listen to popular music or watch a lot of TV or dress in stylish clothing... pretty much the entirety of my middle school years (from sixth to eighth grade, aged about 11 to 14) were miserable, because I was alone and constantly the butt of everyone's jokes. These experiences made me sensitive to the suffering of others.

In my current hometown, the city council recently passed a resolution promoting a commitment to end discrimination in employment, housing, and public accommodations. I was very involved in working towards that goal, and I had even prepared a speech to give at the city council meeting (I didn't end up being able to give the speech). In it, I mentioned that I had been in a horrible car accident that nearly cost me my life. I spent months in the hospital, and even longer in physical therapy. I still don't have full use of my right hand, and I occasionally suffer back pain as a result of this trauma. Yet I would still suffer all of that agony again rather than have to go through the emotional pain of middle school. People who dismiss the need for emotional well-being of others have no idea how much more harmful psychological damage can be than physical damage. All we have to do is look at experiments in which infants are given all their physical requirements (food, water, shelter, cleanliness, warmth, medical care, etc), yet still die in infancy because they receive no emotional contact. No matter how physically healthy the child, if he gets no physical human contact, no one playing with him or talking to him, he will wither and fade. Contrast this with children who grow up in poor but loving families. These children often suffer malnutrition, poor medical care, exposure to disease, and other physical maladies. Yet because they are loved and cherished, because their parents give them affection and happiness, these children often grow up to be well-adjusted and capable adults. Emotional health is far more important than physical health.

It is because I have experienced this sort of emotional trauma that I know how it must feel to be the subject of discrimination. I don't want anyone to ever suffer what I went through, much less to be the victim of worse. So I will always stand up to discrimination, wherever and in whatever form I see it.

There are so many examples of discrimination in the geek community. From 'Gamergate' to the casual comments made to women in comic book stores, you never need to look far to find real people treating other people very poorly. In the article I read, there was a description of a 'GM of [an] online game suddenly having [a female] character knocked unconscious, taken away on a ship, and then graphically narrated raping her character.' Anita Sarkeesian, who hosts the web series Tropes vs Women in Video Games to raise awareness of the problem of misogyny in the gaming industry, has specifically stated that she's not suggesting that there are no good games, that video games are evil, or that the people who play games are inherently bigoted. She merely wants to point out that there are problems, and suggest ways to fix those problems. Despite this, she is constantly receiving death threats and rape threats. The facebook page for this very blog [PinkFae] recently mentioned the backlash against the Baldur's Gate expansion resulting from the studio's decision to include a transgender NPC.


The irony of geeks discriminating

What I find especially disturbing about this is that for many geeks, they're practising the very thing from which they are attempting to escape. Most geeks have been bullied because they're not 'cool' enough. They're often the subject of ridicule and scorn. They know how bad it feels to be excluded. So I don't understand why they find it acceptable to behave in that same way towards others. Especially as there is no real basis for their scorn. Why would anyone ever suggest that females can't like comics? Who ever said that there's no room for non-whites in gaming? What would ever prompt anyone to say that gays or lesbians or bisexuals shouldn't be allowed to sit down and play board games with straight people? Why would we let transgender individuals or gender-non-conforming persons be subjected to the sort of harsh ridicule against which we ourselves rebel when we are the subject of that same sort of ridicule?

My hypothesis is that even as the majority of geeks are downtrodden by mainstream society, they are still in many ways looking at the world from a perspective of privilege. Though they may be outcast by the majority of our culture, they are still for the most part straight, white, cis-gendered males. Sure, other ethnicities are becoming more a part of the geek community. Sure, women are coming closer and closer to being just as common in the culture as males. But the straight, white, cis-gendered males are still the majority. And they have become so accustomed to having that position of dominance that they are frightened of losing it. Like the saying goes, 'to the privileged, equality feels like oppression.'

I've been involved in a lengthy debate on facebook with a friend of the friend who originally posted the article. His attitude is that 'It's misogynistic for men to say that they have to come to the rescue of the poor defenseless women.' He claims that 'Some of the things that may sound like oppression are really just friends playing around.' He provides as evidence a friend of his who routinely sneaks up behind him and grabs his chest, as well as the fact that he has been known to sneak up behind his wife at a convention and slap her on the behind. His point is that people can be 'too quick to judge' in such situations, and find themselves intruding on the private interactions of people who know each other.

To which my response is: firstly, just because some interactions that may appear to be discriminatory are actually just friends playing around, doesn't mean that we should avoid stepping up to combat discrimination 'just in case' it's not actually a case of discrimination. If you find that you are interrupting a friendly exchange between people who know each other, you can simply apologise, excuse yourself, and explain if necessary the motivations you had for getting involved. If everyone is intelligent and mature, then no harm done.

Secondly, you have to be aware that behaviour should always be situationally modified. Acting in a certain way may be appropriate at school, but not in a restaurant. Certain actions may be acceptable in a doctor's office but would get you arrested in a public park. If you are going to behave in a certain way at a gaming convention, you should be aware that others might misunderstand, and try to talk to you about that behaviour. You're surrounded by thousands of people, after all; you can't expect them to just pretend as if you don't exist!

Thirdly, misogyny is by no means the only form of discrimination that exists within the geek community. Focussing specifically on that one type of bigotry does nothing to help the larger overall problem.

No discrimination is ever acceptable. Those of us who are in a position to work against it must do so. The alternative is silent consent of the status quo, and that is not acceptable either.

I'm sorry of this entry was a little heavy. I promise next week will be lighter and more enjoyable. But sometimes, the important things have to be discussed. So until next week,