A friend of mine recently acquired a copy of Terraforming Mars. She was very excited to try it out, so I played it with her and a couple of others. It wasn't the first time I'd played; I'd had a go at it some months prior when another friend got a copy. Having now played it twice, I think the time has come to do a review of it.

So here we go with another Game Dork review. As always, we start with the ratings: 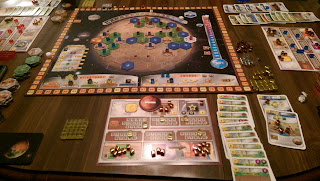 An Overview of Terraforming Mars

Players represent corporations working to make Mars habitable for human life. By taking actions to increase the average temperature, introduce enough water to form oceans, and increase the oxygen content of the atmosphere, players earn points. They also earn points for building cities, creating areas of vegetation, and a variety of other actions as well.

Before we get started, we need to take a look at the player mat. Each mat has a space for money, steel, titanium, plants, energy, and heat. For each of these items, there is a track showing production (how much of each item you produce every turn) and a space to keep your current supply. You use cubes in your colour to denote your place on each production track, but the supply is denoted with metallic cubes: gold represents ten units, silver five, and bronze cubes are one. Some cards or actions increase your actual supply (or cost a quantity from that supply), others increase or decrease your production. A few affect both the supply and the production. Until you've played the game a few times and really gotten the hang of it, it can sometimes be confusing. In the games I've played so far, players would often adjust the wrong one.

There is a First Player token, which rotates between phases (each phase represents a generation, indicating the time scale on which terraforming takes place). A turn starts with each player receiving four cards. They may purchase any or all of those cards at a cost of three M€ each (a M€ is a 'mega-credit'). Then players go in turn taking actions; a player may take one or two actions (their choice) or pass. If they pass, they may take no more actions in this generation, but other players have the opportunity to continue taking actions. Once everyone has passed, they convert all the energy on their player mat to heat, produce everything on their mat (that is, they add more cubes to their supply according to their current position on the production tracks), pass the First Player token to the next player, and start again.

Most of the actions in Terraforming Mars will be taken through cards. By paying the cost to play a card, you may play that card in front of you. Some are event cards, which have an effect when played, but are then set aside, not used again until the end of the game when some of them may award you victory points. Others are automated cards, which have an effect when played but are kept face up in front of you as they each have 'tags' which may affect subsequent cards. There are also 'active' cards, which either have an ongoing effect or grant you an action that you may use once per generation.

In addition to the cards, you may also take a 'standard project.' By spending a certain amount of money, you may take one of a few actions listed on the side of the board, such as placing a city, greenery, or ocean tile on the board, or increasing your energy production. You can also use a standard project to sell cards from your hand at the cost of 1 M€ each.

The other actions you may take on your turn include:
I'll explain those last two in a moment. But it's important to note that many of these actions result in an increase of the global parameters: the oxygen content, the average temperature, and the number of ocean tiles. Each time you do one of these things, you increase your Terraforming Rating, indicated by your current location on the scoring track along the edge of the board. The Terraforming Rating will not only be used as that basis of your Victory Points at the end of the game, but is also your income during the production phase of each generation (modified by the M€ production track on your player mat).

As an action, you my choose to claim a milestone or fund an award. Milestones are certain noteworthy achievements on the path to terraforming:
Once a milestone is claimed, no other player may claim that one. Each milestone is worth five victory points at the end of the game. But it's also important to mention that only three milestones can be claimed; once the third one is claimed, the last two will be unused. Note also that it's not the first player to achieve the condition; since claiming a milestone is an action which a player must take, it's possible for someone to meet the requirements before anyone else, but for another player to claim the milestone first because the first player didn't do so earlier.

Awards are similar: each can only be activated once, and only three of them will be activated. Each one is worth five victory points, although the player in second place gets two victory points. However, awards are not scored until the end of the game. There are five:
The cost to fund an award increases with each one funded: the first award costs 8 M€, the second costs 14 M€, and the final award requires 20 M€ to fund. Remember that the player who funds an award won't necessarily got the points for that award: at the end of the game, everyone compares their quantities, and the first and second place points are awarded at that time. Thus, there is a bit of risk involved in funding an award, as you may end up spending money to give victory points to other players!

Winning a Game of Terraforming Mars

Once the three global parameters (oxygen, temperature, and ocean tiles) have reached their maximum, players finish the current generation. There is a maximum of twenty generations however; if the parameters have not reached their maximum by the end of the twentieth generation, the game ends at that time anyway. Then you count up victory points (your Terraforming Rating, plus points from city and greenery tiles, milestones, awards, and cards). The player with the most is the winner.

Let's start by looking at the six components of a good game:
Sure, it can be fun to lose. It doesn't drag on at the end, with everyone already knowing who won but having to continue playing until you finally reach the end. Although the cards can introduce a lot of randomness (in the most recent game I played, the cards I got simply did not work well together and were not giving me some actions that I desperately needed), the actions and decisions of the players was the greatest determinant in the outcome. And nobody has to sit out because they were knocked out before the end of the game.

The rules themselves take some getting used to. By the third or fourth generation, you've got the hang of things and don't need to refer back to the rulebook as much. However, once you have a lot of cards in play, there can be a lot to keep track of. Every time someone played a city, for example, two of the players had to stop and fiddle with seven or eight of the cards they had in play which were triggered by the building of a city. By the end of the game, it can be exhausting to have to remember all of that.

And it's possible that you may be surprised by who ends up winning, but since there are so many potential sources of victory points, many of them being unknown until the end of the game (the awards being the biggest, but by no means the only, source of this) that it's often hard to know who's in the lead at all.

Most people's biggest complaint is the components: with so many production tracks on a player mat, all marked with a cube (or more, if your production exceeds ten), the slightest bump can utterly ruin your record-keeping. There are acrylic overlays which help to reduce this risk, and there are also apps that track your production and supply so that the risk of knocking cubes off the right spot are eliminated. But I can't help but wonder if the game could have been better designed so that these issues didn't exist in the first place.

My biggest complaint, however, is actually about the fiddly nature of the game. Because, as I mentioned, there are so many things to keep track of, especially by the end of the game, I feel like I'm spending more time managing an ever-growing checklist of minuscule tasks than making strategic gameplay choices. Obviously, most people are not as bothered by that as I am; clearly, the game is popular, as it sits at #6 on the Board Game Geek Top 100 list at the time of this writing.

So, as always, remember to make your own decision. Hopefully I've given you enough information to decide for yourself whether this game is worth a try. And whatever decision you make, I hope you have fun playing games. Now go forth, and