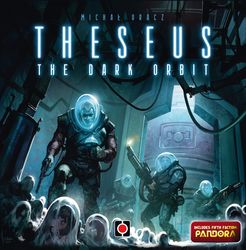 When my friend began to describe Theseus to me, he said that it was sort of like 'Battle Mancala.' That's a fairly accurate description. This game is fairly innovative, in that it presents itself as a gritty sci-fi combat game, but in many ways, it's almost more of an abstract strategy game like Backgammon or Checkers. Board Game Geek lists it as a point to point movement game, but it also lists Mancala as point to point movement. I think that a much better description is 'count and capture.' Let me show you what I mean.

Theseus's board is made up of several modular pieces, each representing a sector of the space station. Sectors are arranged in a circle around the Life/Data Points Board. There's one sector for each player, as well as a Corridors sector, a Control Room sector, and a Tech Bay sector. Each sector has different abilities accessible by a player who has landed in that sector on the current turn. Within each sector are four rooms. It is into these rooms that players place their tokens. Each sector also has a number of spaces where cards may be installed, granting additional abilities to the player who has installed that card. Players begin with three tokens, two in their own sector, and one in any other sector.

On a player's turn, he selects a token to move. That token moves clockwise around the circle, from sector to sector, a number of spaces equal to the number of tokens in the starting sector. Thus, if a token is the only one in a sector, that token will move one sector, to the next sector clockwise from his current one. If there is one token aside from the one being moved, the token will move two sectors. And so forth. This is what makes it similar to Mancala; the number of pieces in the starting space determines how far the pieces move. It's different in that, unlike Mancala, you don't pick up all the pieces and 'sow' them.

After you move your token, you may use the special ability of the sector in which you've landed, as well as using your installed cards, or installing new cards.

Occasionally, you may trigger an Onslaught. Sometimes, this only involves a single sector; on other occasions, it covers every sector in which you have a token. The name (and the language used in the rules to describe the Onslaught) make it sound like a battle, but it's really not. Sure, if you're playing the Marines or the Aliens, you are attacking the other factions in the same sectors, but really, it's just a case of scoring points. In essence, you score points by attacking (or, in the case of the Scientists or the Greys, gaining information about) the other factions. Of most critical importance is the fact that, even for attacking factions like the Marines or Aliens, victims of your attacks don't take damage, die, or suffer in any way. In a sense, you're simply saying, 'I was in a position to launch an attack. I was able to attack two other factions' tokens. Thus, I gain two points.' This is complicated by the fact that, in the two-player version, each player starts with twenty life points, and loses these each time they are the subject of an Onslaught. But in the three- and four-player versions, each player starts at 0, and gains Life Points for each token attacked in an Onslaught.

In either case, the first faction to do twenty points of damage to his opponent(s) or to gain twenty data points is declared the winner.

Pretty straightforward, right? At its core, yes. But there's more to Theseus than that. First, the faction you choose has a major impact on the game. Each token starts out on its basic side, but may be upgraded to the advanced side. For most factions, there's not a whole lot that you can do with a non-upgraded token. The exception to this is the Marines; the non-upgraded side does a single point of damage in an Onslaught. Once upgraded, a Marine token does damage to all tokens it can reach. Contrast this with the other factions, which start with non-upgraded tokens unable to do any damage at all. They must be upgraded to do any damage (or gain any data points).

This sounds unbalanced, but that's where the other complication comes in: the installed cards. Each faction has different cards that they may use. These are thematically consistent with the associated faction; for example, the Marines have the Ambush card, whereas the Greys have the Probe Card. By installing and using these cards, the other factions can quickly level the playing field. Although the Marines have an initial advantage in Onslaughts, all their cards basically have to do with Onslaughts, so that they are effectively prevented from scoring points in other ways. Other factions can gain points in manners other than the Onslaughts (for example, the Greys' 'Probe' card mentioned above is placed in any sector, and any time an opponent's token lands in that sector, the Greys score a point).

There are other minor details, such as the way that landing on a sector that is currently at capacity (having four tokens already in it) causes one of the tokens to be ejected into space, and that player must effectively sacrifice a turn later to bring it back into the station. Or the nature of traps: some installed cards affect all enemy tokens moving through a sector (like the Fire trap, which does one damage to each token that passes through the sector, or the Tentacles trap, which reduces the movement points of a token passing through the sector, or the Camcorder trap, which collects data points each time an enemy token stops in the sector, and stores them until a Scientist stops in this sector and claims those data points).

But you have a general idea of how the game works.

I enjoyed this game. It's a fairly thinky-thinky game, with plans being prepared only to be dashed when another player comes along and totally destroys everything you had set up. It has a non-standard mechanic, which I find refreshing. Games can be won or lost in the last moments; the game I played, it looked as if the Marines were going to win for most of the duration, only to have the Aliens pull ahead at the last moment and seize victory. So in all, recommend Theseus. I wouldn't mind owning a copy some day!

So I will leave you with that for now. Until next week,