Quahtli is of Quechua ethnic heritage, originally living in Peru, but having travelled the world to see many different places, and having many new experiences. A few years ago, she met and fell in love with a woman named Cecilia. Quahtli's natural wanderlust and sense of adventure subsided enough for her to settle down with Cecilia. At first, they would travel together, seeing new places, but Cecilia suffered chronic depression, and after a short time, their adventures together grew less frequent. Now, Quahtli stays with Cecilia full time to help care for her and treat her depression.
Quahtli is not trained in the use of weapons, but is physically adept, and can handle herself in unarmed combat. She is, however, a skilled naturalist, and is capable of surviving in the wilderness should the need arise. If you are using her in a setting that involves magic, she has some minor level of skill in the mystic arts, and should have at least a handful of potent spells.

In terms of personality, she tends to have a rosy view of the world, always expecting the best from everyone she meets, but if she is crossed, she can have a vicious temper and tends to take her anger out on those who invoke it.

Obviously. Quahtli is best suited to a modern campaign on earth as we know it. However, it should be quite easy for you to adapt her to other settings if you so desire. In fact, she was originally created to be an NPC for game of Changeling: The Dreaming that I ran (see more in the World of Darkness section below).

As mentioned above, Quahtli was originally created as an NPC for a Changeling: the Dreaming game that I ran. She was a Seelie Eagle Pooka who had become a Dauntain of the 'Cursed' Doom. She had sworn the Oath of Undoing against one of the PCs, resulting from a backstory in which Quahtli's human lover Cecilia, after being treated by Quahtli for depression through gradual introduction to enchanted reality and showing signs of promising results, was Ravaged by one of the PCs. This so damaged Cecilia's already fragile psyche that she leaped from a tall building, landing on a Cold Iron fence. Quahtli's grief, combined with contact with Cold Iron, unbalanced her enough that she took the Oath of Undoing.

In fact, I still have the drawing I made of the NPC in her Pooka form (please forgive the crude drawing; I never said I was able to draw): 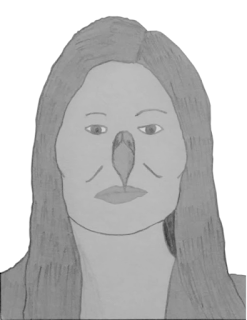 As such, she is presented here with her original Changeling traits. You are welcome to strip those away and use her as a normal human in whatever capacity you need.

Stunts:
Scout the Path. +2 to create advantage with Lore when blazing a trail through the wilderness.
Sentry. You have the ability to wait, devoting your full effort to watchfulness, for hours on end. +2 to defend with Notice whenever you are tired.
Tireless. +2 to Physique when rolling to overcome or defend against exhaustion or sleep deprivation.

So that is the story of Quahtli. I hope you enjoyed reading about her, and that you may be able to get some use out of her in stories that you tell. As mentioned, please feel free to modify her as needed to fit your games. Just remember not to change the most important aspects, the things about her that make her part of the marginalised subcultures (in her specific case, her Quechua heritage and lesbian orientation). That is, after all, what makes her an Inclusive NPC!

Have fun telling stories with Quahtli, and remember to always